With the arrival of the Our Toronto newsletter in most homes last week, I was somewhat annoyed over what I took as Miller's latest public outreach campaign. Though I have since come to terms with the fact that our city is not ready to move this information entirely online, I still see print initiatives as a backwards strategy.

However most concerning is the fact that Mayor Miller plans to divert $400,000 in tax dollars towards funding a newsletter that some city councillors clearly don't feel is needed.

Curious about this costly "difference of opinion", I contacted Councillor John Parker, one of the newsletter nay-sayers who was not permitted to voice his concerns at City Hall. In fairness, I also contacted Mayor Miller who had Kevin Sack, the city's Director of Strategic Communications, contact me on his behalf. Here's what they had to say about my doubts over Our Toronto. 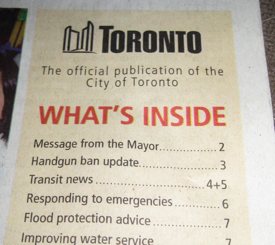 There are some clear reasons for council to implement Our Toronto. It is replacing three other newsletters: Waste Watch, Water Watch, and City Routes. This should help to streamline the city's publication costs. In 2006, it cost the city $700,000 to put out 7 pieces, and in 2007 costs were lowered to only $450,000 because there wasn't enough material to publish more than three mailers.

Seems like a move in the right direction; scaling back costs, avoiding filler, and ultimately reducing waste. So why is something like Our Toronto needed in our city? According to Kevin Sack, it's in the interest of creating one publication to combine waste, water and city route information with updates on the work council is doing.

However, in the words of Councillor Parker, "If the content of the first issue of Our Toronto is any guide as to what we can expect in future issues, I would say our best alternative is to cancel its publication."

Based on the first issue, I have to agree. The entire newsletter reads like a very shallow report, with little to no critical analysis and lots of 'feel good' messages about city projects. There is some advice for Torontonians on flood protection and how to obtain city services, but the main focus is on Toronto council initiatives. This is useful information for sure, but given that most of these projects span several years and often don't come to fruition (like the 2 page spread on the waterfront project) I'm not sure it's something I need delivered to my door.

However, there may be a deeper motive in Mayor Miller's new initiative, and this is a major concern for Councillors like John Parker. "Issue number one [is that Our Toronto] has been rightly described as an instrument calculated to serve the Mayor's political interests. As such, I believe it should not be made to masquerade as an official City of Toronto document."

Sack dismisses this idea entirely, stating that the Mayor has very little to do with the publication and certainly does not edit it. The real question is whether the 24-page publication has any useful information, or whether it is simply a billboard for the Mayor's re-election interests.

Given that Councillor Parker, like many city Councillors, had neither heard of nor helped in planning the Our Toronto launch, it's clear there is some cause for concern. "I don't believe the average Torontonian will benefit from this publication," says Councillor Parker, "I am inclined to believe it is intended mostly to benefit the Mayor himself." 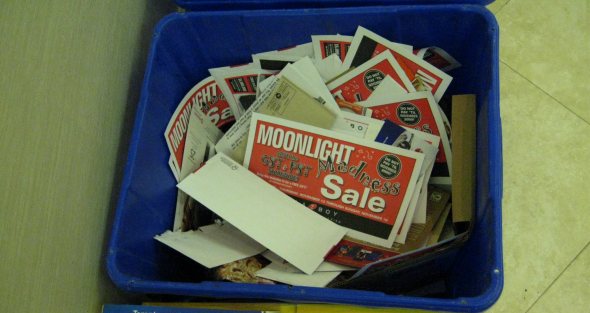 Having said that, there were very few copies of Our Toronto thrown into my building's recycling. If that's any indication of people reading this first issue, it can be said that it was a successful launch. Surely putting out only one issue and at the very end of 2008 (after no communication from the city for most of the year) will pique some interest. 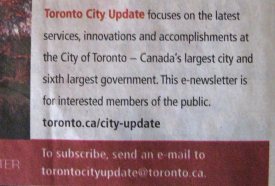 Despite the protest over moving this information online, most of the articles require you to go online to learn any real information. Many articles are indeed promoting the use of online forums in this way, and links are provided for each. Seems like this newsletter could help to transition into an online only environment in the future. In fact, the back page of Our Toronto has an excellent subscription option for the city updates e-newsletter... why not ask people to subscribe to Our Toronto if they want to receive it, rather than blanket the city with more mailings?

I also find the logic behind the newsletter's 'multicultural outreach' kind of funny. It's printed in English only, with a small column found inside the front cover directing readers to the online version offered in 11 different languages. Considering how 'inadequate' online publishing is according to Kevin Sack, I wonder how much value there is translating the newsletter but printing only English copies; hopefully people track down their language of choice online, but I suspect the print copy will end up in recycling bins long before this happens.

I'm still not sure we need to fork over an extra $400,000 next year, in order to meet the quarterly publication schedule on Kevin Sack's wish list. Interestingly, this gives us a total requested budget of over $800,000 - about a hundred grand in excess of Toronto's newsletter publication costs in 2006 and well over the reduced budgets over the past two years. So much for tightening our belts.

Still, in the interest of being fair, this is a nice, colourful and relatively well-written publication. Although it is expensive, it is an excellent way for the city to claim it has reached every citizen, no matter what their income, age or ethnicity. Even Sack agreed that there may be changes needed, both to the newsletter and publication schedule.

Ultimately I hope City Council is more involved in the newsletter creation. As Councillor Parker suggests, "We should be certain to balance the benefits of any form of publication against all countervailing criteria. Cost to the taxpayer and environment are valid considerations in this regard."