In Photos: Artscape Wychwood Barns Brings Together Artists and Community

Artscape Wychwood Barns, which officially opens to the public on Thursday, is a pleasant anomaly in Toronto.

It's a burgeoning 60,000 square foot community-based facility that Artscape developed with the City of Toronto and The Stop Community Food Centre. You'll find it situated on a five-acre piece of land where the former historic TTC streetcar repair barns were located, in the St. Clair and Christie neighbourhood.

Artscape Wychwood Barns has space for 15 artist studios and 26 artist live/work spaces, as well as 13 not-for-profit organizations that will provide educational programming focused on arts and the environment.

Since Tim's first look last weekend, I got a chance to preview the space and meet with some of the artists who got affordable live/work, studio, office and rehearsal spaces in the new facility.... 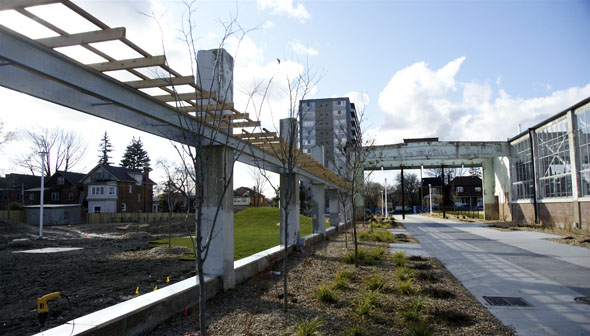 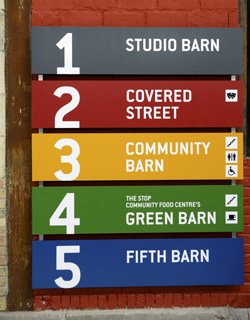 Most of the artists I spoke with expressed their notion that the overriding benefit for sharing this space was the support and community between the other artists.

It's designed to foster collaboration between artists.

This project was supported by a lead donation from the George Cedric Metcalf Charitable Foundation. The partnership was fostered by the community and City Councillor Joe Mihevc (pictured below) who said this was the result of the power of ideas to overcome barriers.

"This took 21.2 million dollars of public and private investment to make this happen," said Mihevc.

"This is really the birthplace of public transit in Toronto," said Tim Jones, CEO of Artscape.

"In 1978 the TTC closed this facility. Now, with a multi-tenant space like this, the more diverse the tenants, the more successful the place will be." 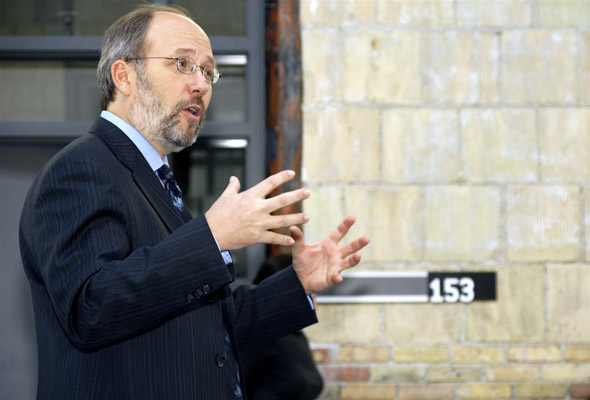 Joe Lobko, the lead consultant and architect of the Artscape Wychwood Barns was on hand to tell us about how it all came together.

"There were concerns with the balance of the park space," said Lobko. "Whether it would support and augment or detract from the barns. The integration of the site and the nature of the building was a concern." 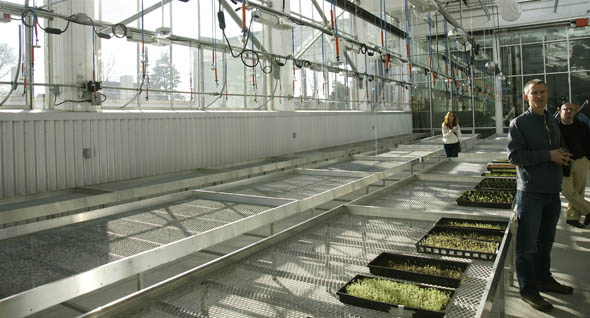 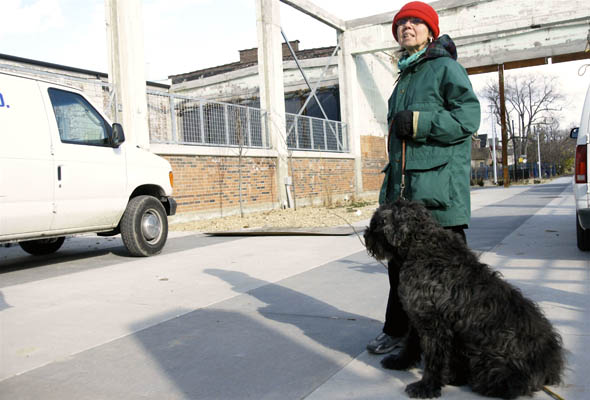 While touring the outside of The Barns, I met Sandra Carpenter-Davis walking her big Bouvier named Jo Jo Bella. She said she was delighted to have this community facility in her neighbourhood. "It's just fabulous what they've done with this place."

Back inside, I met with some of the community groups and artists that are now making the Artscape Wychwood Barns their workplace, studio and in some cases home. 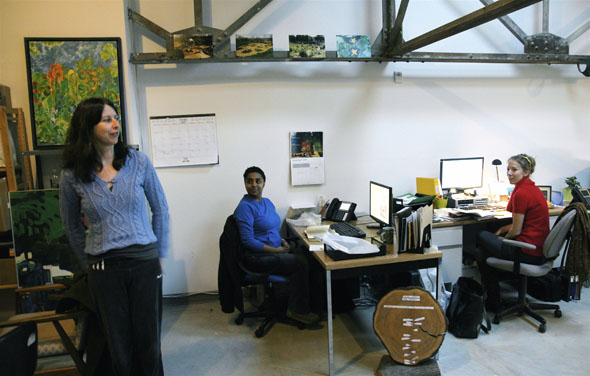 Local Enhancement and Appreciation of Forests (LEAF), who run programs like Toronto Tree Tours and occasionally assist with groups like Not Far From the Tree, have now set up office in the Artscape Wychwood Barns. 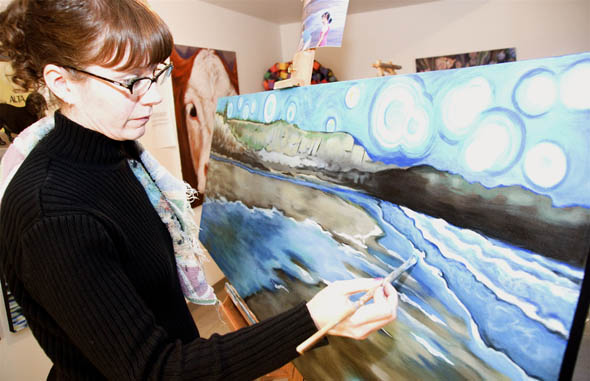 A couple of visual artists, Leanne Davies (pictured above) and Karen Cantello decided to share the rental of one of the small studio spaces. It looks rather small for one, but at $437 a month, they decided to split costs and the work space. 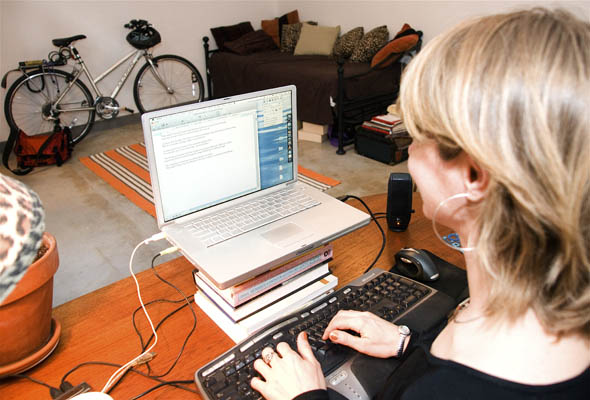 Writer Leanna McLennan likens having a studio among other artists at The Barns to the residency experience at the Centre for the Arts in Banff. "It gives me energy," says McLennan. "Collaborative projects are likely to happen here." 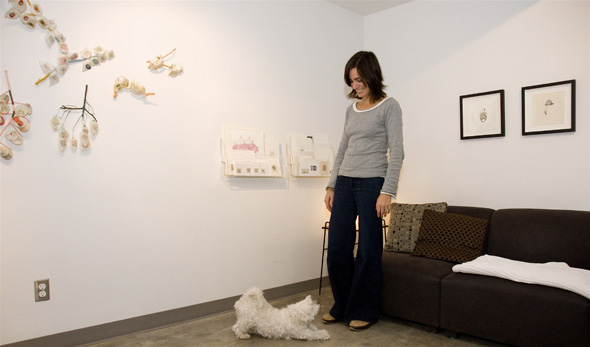 Sculptor and illustrator CybĂ¨le Young and her dog Comma (pictured above) have made this place their studio as well. Young creates sculptural works from fine Japanese papers and printed with etched copperplates. Since a lot of her work is small in scale, it shows well on the walls of her tiny box of a studio. 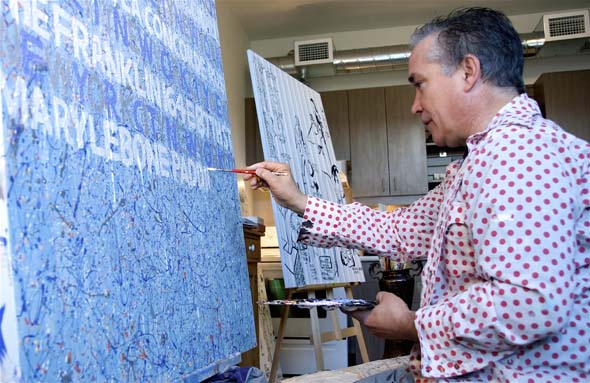 Visual artist John Coburn (above) moved into a three-bedroom live/work space recently with his two kids, aged 11 and 14. "I can almost paint and make tea at the same time," he jokes. "You can't help but have fun at this location."

So what's this place like for a visual artist? "Well, I paint with oils, but they've got great ventilation here."

Upstairs from the studio area are the bedrooms, in all their industrial splendour. 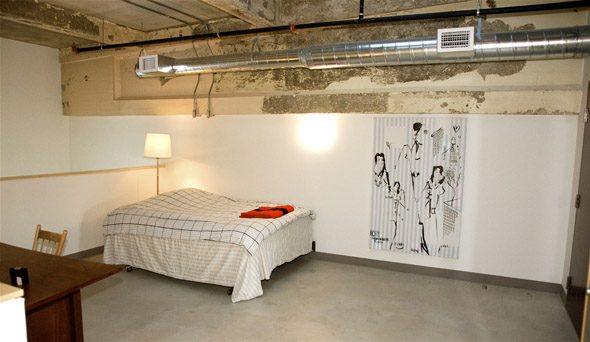 "For many years, in the studios I've been at I'm all alone," says Coburn. "With the nucleus of artists at this building, there's a lot of support from a business point of view." 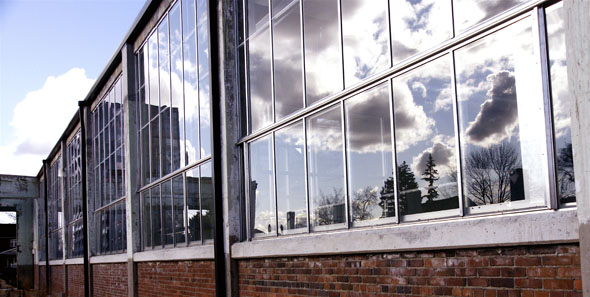 You can check the place out for yourself tomorrow (Thursday) at the official opening ceremonies and public launch and open house from 3:30 p.m. to 6:30 p.m. The Barns are located at 76 Wychwood Ave.