Behind the Mic: Roger Lajoie at The Fan

I remember being surprised when Toronto got an all sports radio station in 1992. I was young, and at the time thought there was only one team in town, the Blue Jays. Over the years, I've listened to The Fan 590 more and more, not just for baseball games, but for updates, discussions, rumors and insight, and I've genuinely become a fan of all the Toronto sports in the process. As much as I can roll my eyes when callers phone in to talk about the Leafs in the middle of July, I would really miss not having The Fan 590 on the dial. After-all, I'm a sports fan.

For Toronto sports fans like myself, Roger Lajoie is best known as a talk show host on The Fan 590, but as one of the busiest guys in sports, he can be found just about everywhere - and in every medium - including television, newspapers and blogs. Roger hosts the OHL's St. Michael's Majors home games and is the play-by-play voice of the Oshawa Generals on Rogers Television during the winter. Throughout the summer, he's the public address announcer at Christie Pits for the Toronto Maple Leafs of the Intercounty Baseball League, something he has been doing for the past 25 years. As a North American correspondent for the Reuters News Agency, Roger has covered some of sport's most coveted events such as the Super Bowl, Stanley Cup Finals, World Series, NBA Finals and the NCAA Final Four. Oh, and he just finished a book on Jimmy Devellano of the Detroit Red Wings called, The Road to Hockeytown. I caught up with the Ryerson journalism graduate to learn more about working on The Fan, sports in Toronto, and ask if he had any advice for aspiring sportscasters.

You're considered one of the busiest guys in sports. I imagine there is something rewarding about covering such a wide variety of events in so many different mediums, but would you trade it all to cover only one team/sport full time?

Easy answer to that question - no. I love the variety and getting to work in print, radio, TV and web over the years has been great, and getting to cover baseball, hockey, football, basketball and numerous other sports has been tremendous. The variety is one of the best parts of what I do!

Considering you pretty much talk about any and all of the major sports on The Fan, how do you prepare for what callers may ask about? What are your references (computer, TV, notes) while you're actually on the air?

You can't really prepare for what callers may talk about, but that's what makes it fun! We have access to our computers, the TV and a lot of research material during a show, but it's the free flow of live radio that makes phone-ins work. As long as you don't pass yourself off as a "know-it-all" people don't mind if you can't answer every question. What they want most is your opinion.

Is Toronto a great sports town? Why or why not?

It's a below average sports town. It's Leafs first and everything else second. There is no support at all for most amateur sports either. A great sports town is a town where fans support everything and really have a passion for sports. Outside of the Leafs, Toronto is not a good sports city, especially in comparison to U.S. markets. 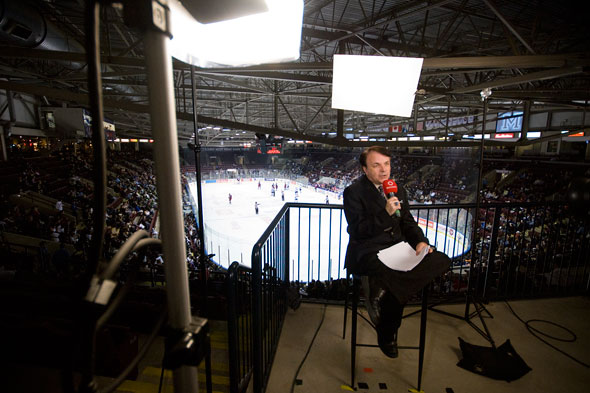 Roger Lajoie at Hershey Centre before the start of a St. Michael's Majors OHL hockey game.

How much do you screen the calls when you do a call in program? Any memorable calls that didn't go so well? Can you pretty much tell what people call about before each show and know what they are going to say or is every day a surprise? 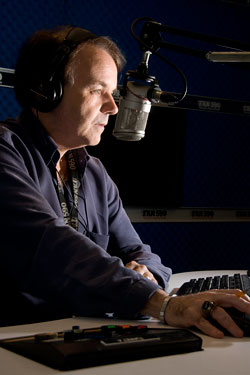 They are screened but only to determine how fit the caller is to go on the air. We want people to audition to come on, not just take every caller, so we get some good discussion going - but in no way are any calls staged or rehearsed. We also don't want everybody agreeing with the host either - that's not good radio! Lots of calls didn't go so well, people swearing or being really insulting or rude. Memorable? I forget them as soon as we hang up on them! Some nights when a big story breaks it's easy because everybody wants to talk about the same thing, but on other days we never know what's coming. And there are usually a few surprises every night, which makes it fun.

Is there a team or sport you're surprised has not caught on in the Greater Toronto market?

I guess I thought the Blue Jays would sell a lot more seats than they have. To go from 4 million to 2 million is quite a drop. I also think it's a shame the Argos don't pack the place, but I can't say that is a surprise.

You must have a greater knowledge in some areas and very little in others, what sport do you feel most comfortable covering? least comfortable?

Hockey and baseball I know very well and have worked in both on the amateur level, so those are the easy ones to cover. Olympic-type sports are the only ones that I find tough, as I don't follow them much at all. However with websites and easy research, you can get a good working knowledge of most sports pretty quickly now, compared to 15 years ago. 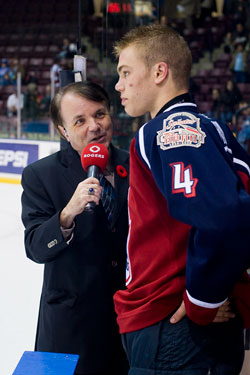 You cover events from Junior hockey to the Super Bowl. If it's even possible to ignore the big contracts, the spotlight and the egos, do you think when you boil it down it's all the same game?

Yes it is, although we don't see it enough. It's still the same sport at any level though, all really kids games. My favorite pro sports scene is the walk-off home run in baseball, everybody jumping up and down at the plate like a little kid. Just like they did when they were kids!!!

Tell me about working as an instructor at College of Sports Media. What's some of your best advice to someone interested in pursuing a career in sports media?

I love it. Teaching is fun for me. Advice? Follow your passion, never give up, work hard, and appreciate and savour every moment when you get success. On its worst day it's the best career in the world. Oh - and don't pray for less of a load to carry. Pray for a stronger back.

If you had tickets to go see just one game of the year, in any stadium/area, in any sport, what would it be?

Super Bowl. Easy. The greatest sporting event in the world bar none. But hey - I get in for free so wrong guy to ask that question to! 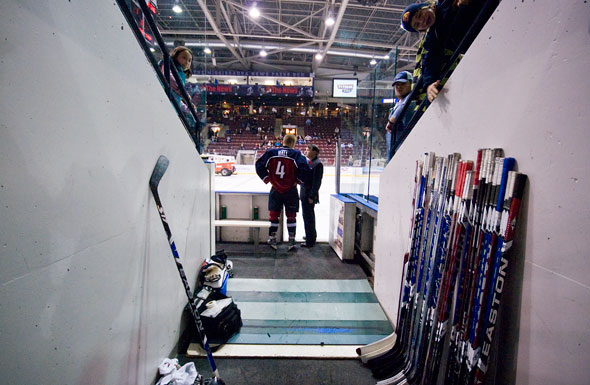 Roger Lajoie with Taylor Hall of the Windsor Spitfires

You can catch Roger Lajoie most weeknights on The Fan 590, co-hosting with Stormin' Norman Rumack, or filling in as host for other programs throughout the year.

Behind the Mic is a series of five blogTO interviews with Toronto radio personalities. The first posts in the series featured Larry Green of Jazz FM, Barry Taylor of 102.1 the Edge and Matt Galloway of CBC Radio.