Behind the Mic: Matt Galloway at CBC Radio

There are people who listen to CBC Radio and there are 'people who don't. Growing up, I never listened; CBC wasn't on in my house when I woke up, or when I was picked up from school. My parents didn't listen, so I didn't listen. I have to admit, I didn't even know the station's frequency until just a few years ago. I do remember what caught my ear though. Flipping through the dial, I happened upon the distinctive chimes of the subway doors closing, mixed with a quick rhythm and a voice with an accent introducing a show called Here & Now. I've been listening ever since.

When I've caught wind of some news story, or heard something about some festival, or I am confused by a complicated new city proposition, Here & Now straightens it out. It goes directly to the sources, interviewing key players in the days events. Quarterbacking it all is host Matt Galloway whose knowledge and passion for Toronto is unrivaled. I caught up with him to talk about the show, the city and his varied media background.

I doubt many people know about all the people and work that goes into a three hour show like Here & Now. Can you talk about what goes on before and after each show on a typical day and who is involved in the process. Do you have overall editorial control?

I'm very fortunate to work with a small but smart, creative and very hard-working team of producers who make me sound smart on a daily basis.

We have a big white board that plots out the show in 10 minute chunks. On good days, some of those spots are already filled in with stories. On most days, we start with a blank slate and work to fill it up, knowing that we go to air at 3 pm.

A deadline sharpens the mind. The good news is (touch wood) we have yet to start the show with dead air. It is the miracle of radio.

Working at NOW was loads of fun. An even bigger step for me perhaps was stumbling into the studios of York University's campus radio station, CHRY, during my first year of university. It was (and remains) a 50-watt station steps from Jane & Finch that isn't heard south of St Clair and is yet a crucial part of its community. The Saturday morning reggae show was religion for many in the hood.

Working there (and hosting my program, the Autopsy Turvy Show) really showed me how connected to its community radio could be.

We use every source possible for story ideas, from mainstream papers to blogs, posters on sign posts, stories in community papers and chatter on the street. The wider the net the better.

While Toronto's diversity must provide for a wide variety of topics, events and issues, are there challenges in covering such a diverse city?

Toronto's diversity is its biggest strength, and that diversity is the mainstream, at least for us. We're lucky to have such a range of stories to choose from.

Fully reflecting the city we live in can be a challenge in a show with so little turnaround time, but it's really all in the choices you make in terms of the stories we suggest, the guests we speak to, the music we play and the events we plug.

Someone once told me they got off a plane, got into a car, and turned on the radio. Our show was on and they said they knew they were in Toronto - what they were hearing sounded like this city. That's what we're trying to do.

Do you consider Toronto a world class city? Why or why not?

Not sure what "world class" means. Almost as good as Chicago? Like New York, but nicer?

There are many great cities in the world. We are one of them.

What we lack is something substantial that will pull us together. When you're constantly begging for money to keep potholes filled and grass cut in parks, you can't to have the vision for something transformational or unifying. There are bits and pieces of this happening, particularly on the cultural scene (i.e. a million people on the streets for Nuit Blanche), but what about a grand project that electrifies and inspires the city? Don't tell me we can't afford it...

Who picks the music on your show?

For the most part, I do. We try to play as wide a mix as possible to reflect who we are and what's going on in this city. Some things you've heard before... some things you should hear right now.

On Here & Now, and throughout your career, you've covered the widest variety of subjects. Among them all, do you have an affinity for particular subjects? Do you wish you could cover other subjects more frequently? Are there certain subjects you wish you didn't have to cover at all? 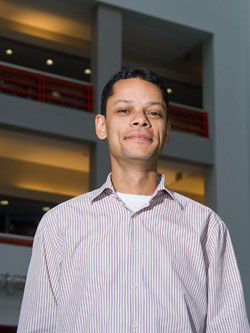 The best thing about my job is that I can go from food and politics to architecture, literature, West African psychedelic music and soccer in the space of three hours. It fits nicely with my short attention span.

From working on radio, you must have a certain amount of anonymity. Do people recognize you from your voice?

Occasionally. Most often, it seems, in the grocery store, when I'm explaining to my kids why they can't have dinosaur egg cereal.

Talk about your experience reporting on the Olympics in China?

The most fun I've ever had at work.

We worked 16 hour shifts for 21 days straight, but it was exhilarating to be in a city/country in the midst of something massive. Was it the Olympics? Was it a country opening itself up to the world? Hard to tell, but you could go into the wildest corners of Beijing, miles away from the stadiums and crowds, and feel something happening.

And the food was unbelievable.

I was a very lucky man.

What are some of your favorite corners/neighborhoods of the city?

I live in the west end, and love my street. We have Ethiopian, Japanese, Korean, Greek, Mexican, Jamaican, Portuguese and Indian restaurants at the bottom of our block, plus the best grocery store in the city, a kick-ass butcher shop and the top baseball yard in town (sorry Mr Rogers).

The Artscape Wychwood Barns at St. Clair and Christie will be a remarkable addition to the city - a kind of creativity lab mixing visual arts, community activism, and food.

The green space behind the Brick Works is, for me, typical Toronto. You're only steps away from the highway but it's a nature preserve that runs through the ravine and is almost silent.

I've also become somewhat obsessed with the Pacific Mall in Markham. Hand-pulled noodles don't get any better than the ones you can find on the second floor.

Behind the Mic is a series of five blogTO interviews with Toronto radio personalities. The first posts in the series featured Larry Green of Jazz FM and Barry Taylor of 102.1 the Edge.