Behind the Mic: Larry Green at Jazz FM

For as long as I've been driving, Jazz FM has been a preset station on my car radio: for background music while chatting with a passenger, to avoid the endless commercials on other stations, or simply because a rhythm catches my ear. I often find 91.1 the best option among the dozens of other stations in the city. I like jazz, but I wouldn't call myself a serious fan. Mainly though, I love the station because I can count on it to give me something completely different.

Part of my enjoyment of the station over the years has been the knowledge of the presenters. Larry Green has been the afternoon host of Jazz FM for eight years and brings to the air a lifetime experience in the industry and beyond. Green has been a mail-boy at CBC; writer, creative director and host at CHUM; sportscaster; voice and acting agent; and national promotions manager for Warner Music Canada for 16 years. I met with him at the Jazz FM studios in Liberty Village to talk about his years in radio and Jazz in the city.

How influential was growing up Kensington Market on your life-long love of music?

Yes, I grew up in Kensington Market, which was very multi-cultural with different musical influences. You know it's really interesting, in old neighborhoods like that, you knew everybody, and everybody knew you and everybody was in the same boat, nobody had money. But there was lots of music, and there was lots of different food and people from different countries and different places. You can't help but be somebody who just soaks it in like a sponge and it was great because it was sort of my first music influences.

Do you go back ever now? What do you think when you see it now?

I go back a lot. It's not the same. The ethnicity has changed. The concept has changed somewhat. And now there are big business trying to get in. They are not very welcome. It was predominantly a Jewish Black community, in those days when I was there.

What was your musical training formal or informal?

I was about twelve or thirteen years old and friends of mine wanted to start a band to try and get jobs in the summertime playing at different resorts, predominantly Jewish resorts. I decided I wanted to play saxophone. I couldn't get a note out of it when I first started. I started taking lessons with Morris Weinsweig. And then from there I went to study with people like Moe Koffman, Bernie Pilch. So that was pretty well my formal training. And yes that band did come together and we played at some of those resorts for a number of summers. I still maintain those roots, but I broke my jaw in a car accident when I was twenty so that was kind of the end of saxophone playing.

You've worked at a lot of different radio stations through your career. What were some of your earlier experiences like?

I was in a very fortunate position when CHUM-FM became a freeform radio station. KSAN-FM in San Francisco became the worlds first freeform.

What does freeform mean?

Well you could play just about any kind of music that you want. The people on the air chose the music. KSAN-FM had people like Allen Ginsberg and Jack Kerouac, still alive in those days, going on the air and reading poetry. They had a singer doing blues news who sang 12-bar blues news stories every 6 o'clock Monday to Friday. I mean it was just outrageous. But it was the most interesting radio station I had ever heard.

And thanks to Larry Solway and Garry Ferrier at CHUM, they talked Allan Waters into going that way from a classical station that it was way back when.

Now I already had been there as a copywriter, copy chief and creative director for CHUM limited, so I was writing copy more than anything. But I went on the air and I did and hour a day right at the beginning. It was fascinating, really incredible. So you could play 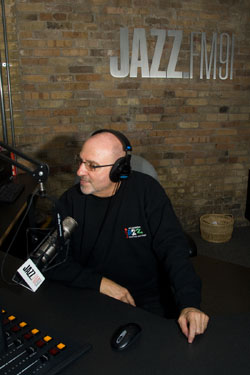 The Fugs and The Mothers of Invention, next to Miles Davis, next to electronic-classical and then play a country record. And it would work. I mean it was nuts. But somehow people on the air were so knowledgeable about music that it never sounded strange or out of place. And I couldn't believe it and I wanted to be a part of that. So I eventually gave up my gig as a writer, administrator and manager at CHUM to go back on the air. And I ended up doing 2-6, which is my shift now here [at Jazz FM], so it's come around.

But it was amazing, it was the most fascinating, interesting and exciting time of rock and roll music too, The Beetles were around and you had Richie Havens and Judy Collins... it was amazing. And having the freedom to put pieces of music like that together was phenomenal.

Is this the closest you've returned to the freeform?

No, I don't pick my own music anymore. I did initially, but management changes and radio station's concept changes, but no, I don't pick it. I pick a few tunes if I need to, I have some flexibility but most of the material, like every other radio station, is being picked for me.

Difficult. It's interesting but it's difficult. How do you ask for money? You find ways to make it interesting and entertaining, I think we have learned, I've learned a lot, about going on the air and fundraising. You know there are a lot of people behind the scenes who are involved. A lot of volunteers, a lot of people upstairs. They go to different conferences to learn how to do a better job. I don't know if there is a real fast hard answer on how to get people to send money, but we do okay actually, we do reasonably well. I think the last campaign we were over $500,000 in two weeks. The interesting thing though is that 3% of our listeners, approximately, are the ones that do the donations. So there are 97% of people who don't send money at all, they say, "Hey, it's a radio station, I'm used to getting it for nothing." 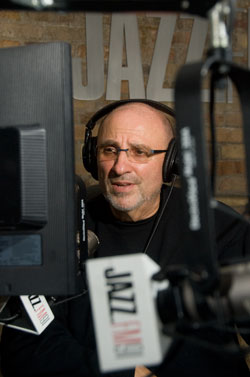 The interesting thing about this radio station is that we're now, in terms of listenership, I think number 2 in North America in terms of Jazz radio. We used to be behind a station in New York, but now we are second behind KJAZZ in Long Beach, California. They have the largest audience but they have a huge territory too.

You've worked a lot of other jobs over the years, does the fact that you came back to radio mean that this is where you heart is?

The fit between this radio station and the format and me is pretty obvious. It's very difficult on a niche format like this to find on air staff who are knowledgeable about jazz and have a radio background, because you still want to have a professional radio station sound. Or vice versa. You can find jazz people but they don't have a background in radio, or you can find lots of radio people and they don't know anything about jazz. So the mix was good. Ted O'Reilly did this job for thirty years and I replaced him. The day that he left, they called me. I'm going into my eight year.

What do you think of Toronto as a jazz town?

It's always has been a great jazz town. Great rhythm and blues town, and I grew up here and lived here pretty much all my life except when I was away working in radio. And so, yes, Toronto is a great town. The weird thing is, we don't have a lot of jazz clubs. In Seoul, South Korea I think there are 13 working jazz clubs, and here, just a few.

The Rex, the Pilot on the weekends and there are small rooms opening up here and there. It's different than it use to be. It's different because it's an expensive proposition to open a club and get it running. The joke is, how do you become a millionaire as a jazz musician? You start with two million.

I do that program called Jazzology on Thursdays nights with students from Humber, York University, University of Toronto and Mohawk. I asked the dean from each of those schools to make sure that each kid who comes to do that show gets a credit. So now it's a big deal, all the kids want to come. We've cut it down to five students per school and it's really competitive to come on and do Jazzology with me. ??I love the young people. Today I interviewed Ben Miller who had his base stolen at one of the clubs in town, hand-made, custom electric base. Instead of just whining about it, they put together on Wednesday night at Lula Lounge, a fundraiser for a school that gets instruments for kids that don't have anything. So they turned it around and made something negative a positive. I love doing that stuff.

You already mentioned a few, but what are some good Jazz clubs in the city?

For Latin jazz, it's Lula Lounge, there is always something going on there. Rex has music pretty much every day. They have student players usually around 6:30 and at the 9:30 shows they have the more experienced players. The Pilot still has saturday afternoon jazz, and it's free. There is The Dominion on Queen and there is Chalkers now which is up on Marlee Avenue which has really opened up a lot of their jazz opportunities, caters to a whole other audience from the northern part of the city.
And there are rooms here and there trying different things.

These young people from Humber, York and Mohawk go out and hustle restaurants. Lots of little things like this going on, and as long as that is going on there is a live culture that's taking place, the jazz culture is still there. It's not easy being a musician.

Are there some bands in the city you would recommend?

Well it depends on what you like. I'm a big Bebop fan, and so if you've never seen Collage, then you got to see that band.

There is another club too called Quotes on King across from Roy Thompson Hall. It's a big long bar, and most of the people who used to go to the Montreal Bistro go there on a Friday night, there is no cover, and it's the Canadian Jazz Quartet and guests. So that's kinda fun. An older group of people for the most part. It's mainstream music, they are never going to get too far out there.
I mean there is so much going on. You got to go out and hear the kids, you know the university students, they play at the Rex a lot where you can go and hear some pretty great young players.

Any particular bands? No, because bands change, people move all the time, it's not like rock n roll where you have the same players all the time. They change night by night. 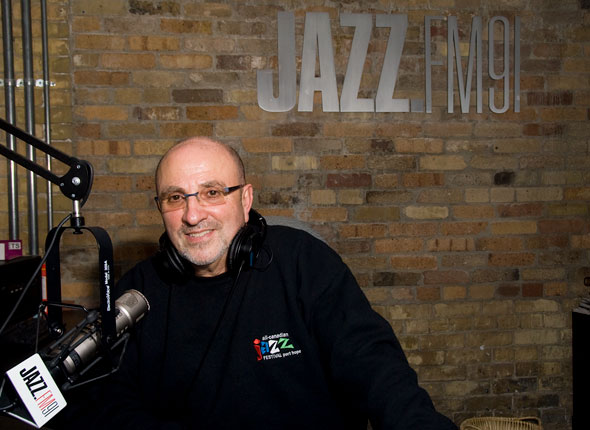 This is the first of five blogTO interviews with Toronto radio personalities. Future interviews will include Barry Taylor of 102.1 The Edge, and Matt Galloway of Here & Now on CBC radio.