The Toronto Zombie Walk was a frightful success this year. Over 3,000 zombies showed up at Trinity Bellwoods Park in Toronto's west end and proceeded to saunter, shuffle and scare along Queen St. W. and up Bathurst to Bloor.

On my way to the park, I dropped by the Bazaar of the Bizarre, where chocolate brains and fresh eyeballs were to be had, as well as a wonderful variety of clothing and accessories. Among my favourite, the steampunk jewellery by Colleen Manestar's Clockwork Zero and steampunk clothing by Retro-G Couture.

But it was nearing 3 p.m. so it was time to head to the park. En route I was greeted by a werewolf with an iPod. A couple of lost 15-year-old kids eager to participate in their first zombie walk soon joined our entourage. The zombie walk phenomenon started in Toronto five years ago by event organizer Thea Munster (pictured below the werewolf photo) and has since taken cities around the world by storm. 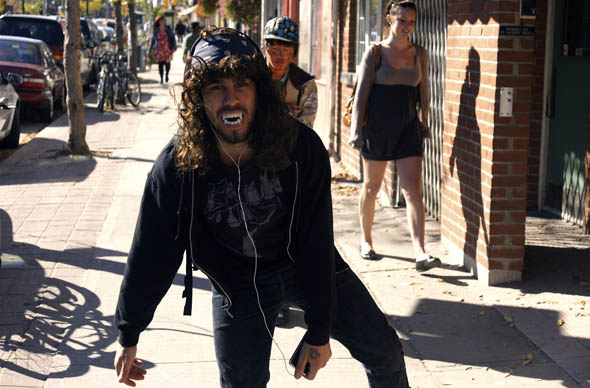 By the time I reached the park there were already hordes of zombies in a fairly peaceful gathering. The numbers were well over double last year's zombie walk, which numbered 1,400 according to one police officer. 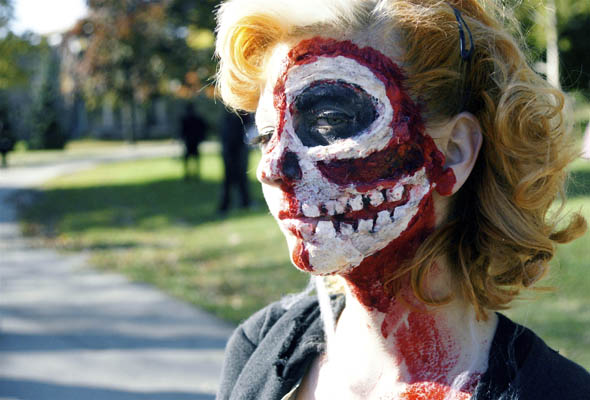 We all assembled in the pit, where I encountered a mother zombie feeding her three-and-a-half year old zombie baby as her four-year-old zombie niece happily munched away on a brain of her own. 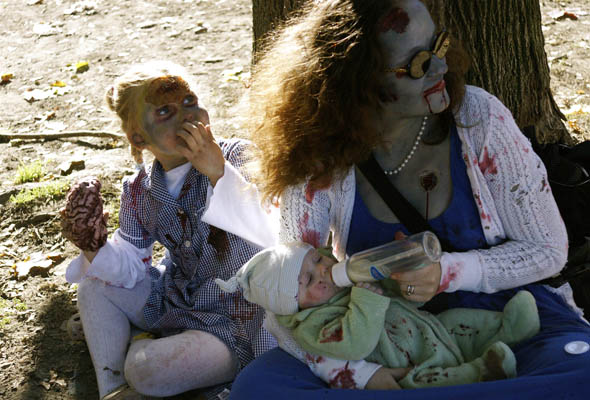 It wasn't long before the crowd got restless. One zombie defiantly climbed a lamppost, urged on by cheers from others, many waving placards with signs like "Undeadism is wrong! Human-zombie integration now!" and "Zombies for the ethical treatment of humans." 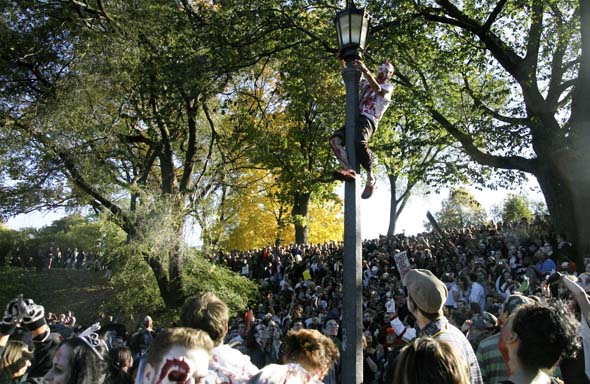 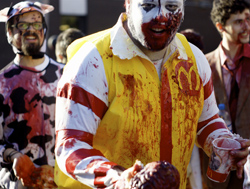 Among the masses this year, I saw:

- a zombie chef with a lobster attacking his neck

- a pair of zombie skiers

- a zombie bludgeoned by an umbrella

- a zombie taking a bite out of her pet golden retriever

- a Ronald McDonald zombie, who shouted out epithets like "Anyone want a McBrain Sandwich?" and "It's on the $1.39 menu!" 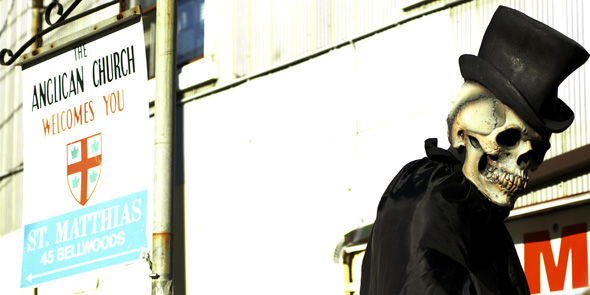 As we passed a church on Queen St, Mysterion began to read from The New Testament. 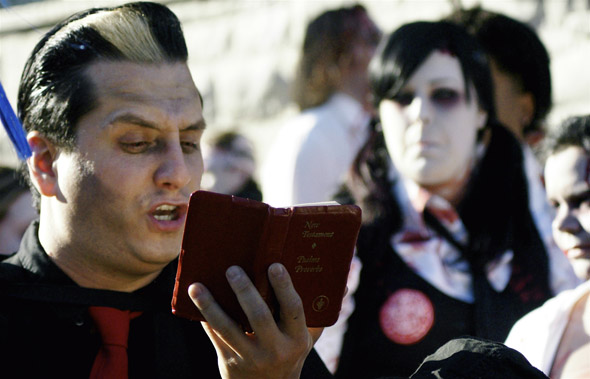 There were moments of mayhem when the streetcar passed by, cheered on by the masses of zombies, but the cops made sure it didn't get out of hand. 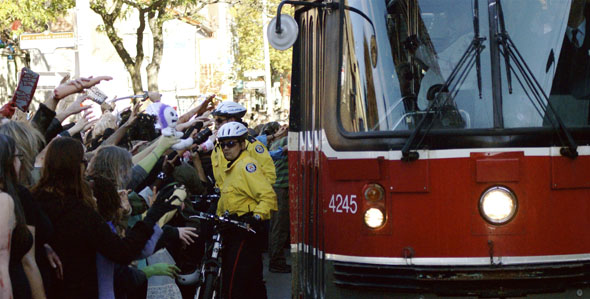 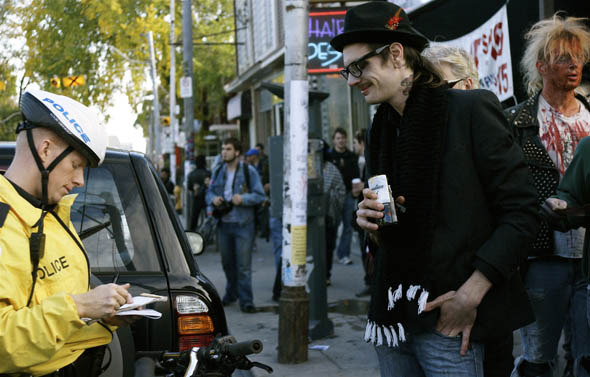 One zombie couldn't kick his drinking habit -- even after death -- and got nabbed by the cops for publicly swigging a bottle of Canadian Club, which he foolishly dropped, smashing into pieces on the sidewalk.

At one point, the zombies tried to put the FUN back in funeral as they passed the funeral home on Bathurst St. where some confused mourners watched in awe. 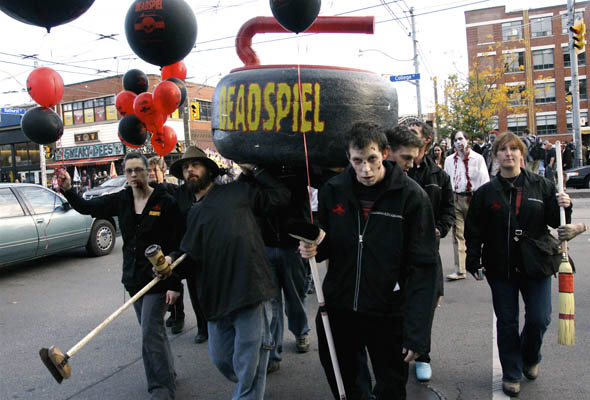 A team of zombie curlers caught many by surprise as they carried a large stone all the way up to The Bloor Cinema, where they partook in the short film, Deadspiel, that was screened before Kevin Tenney's Brain Dead. 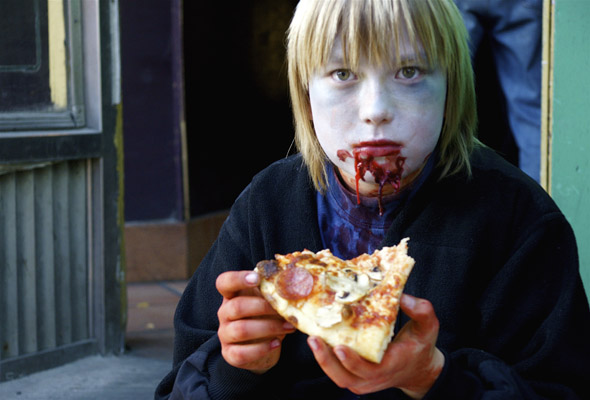 As we neared Bloor, many of the throngs had stopped for pizza or burgers, as the supply clearly outweighed the demand for brains. 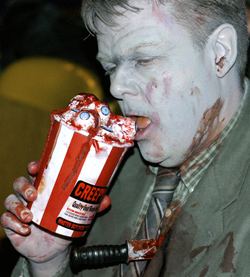 I opted to refuel on poutine at Mel's Delicatessen, where every table was packed with zombies from the zombie walk. I saw a couple about to enter but after seeing the place so dead, they thought better of it and walked away.

The day's festivities weren't over until at least one gory film from the Toronto After Dark Film Festival. The Bloor Cinema was abuzz with zombies, ready to devour more than just popcorn.

While it wasn't quite Hallowe'en, I sure had an awesome time dressing up and marauding about the city streets at this year's zombie walk. We should have a zombie walk several times a year, as there clearly is a built-up demand for it in Toronto.

What was your Toronto Zombie Walk experience like? If you didn't go, would you consider going next year?