The ROM Brings on the Bling

The world's third largest cut diamond is coming to the Royal Ontario Museum (ROM) as part of The Nature of Diamonds exhibit, opening to the public on October 25.

Invited to a special media preview of one of the most famous diamonds of the exhibit, I was surprised with the laissez-faire security. While there was plenty of museum security staff present, I witnessed no pat-down or ID check prior to my entrance into the ROM's Garfield Weston Exhibition Hall. I get scrutinized closer upon entry to some of the live music venues in Toronto.

After signing in, we made our way into the bowels of the ROM, where we were led to a 16-section steel walk-in gem vault, where all the bling was kept. In the middle of the vault was an empty showcase, where ROM preparator Sue Ventura was about to bring in the bling. 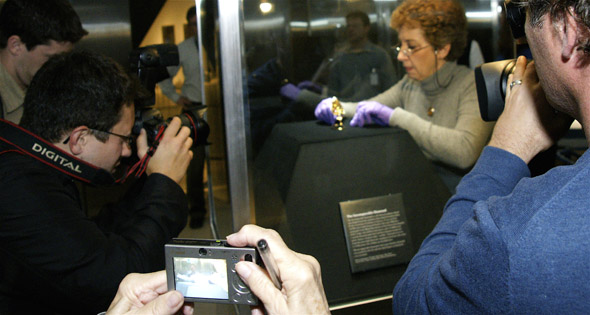 Wheeled nonchalantly on a trolley, The Incomparable Diamond was gently placed upon its pedestal with purple gloves. I didn't hear any oohs or ahs directed at the flashy stone from the rest of the media present, but there was plenty of flash photography. 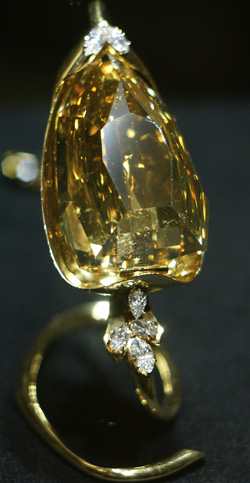 About the size of a 10-year-old child's fist, the 407.48-carat gemstone is described as a golden-coloured kite-shaped diamond, graded as flawless and fancy deep brownish-yellow by the Gemological Institute of America (GIA). It's the largest flawless diamond ever graded by the GIA.

I kind of half-expected protective motion-sensitive laser beams surrounding the jewel, not unlike scenes from a James Bond or Indiana Jones movie.

After all, the diamond was listed at 15 million pounds sterling (over $30 million CDN) when it made an appearance on eBay in November, 2002. Although it remained unsold.

The diamond has an interesting history. It was found as an 890-carat rough diamond by a young girl playing in a pile of rubble from a nearby diamond mine in the Mbuji-Maya district of the Democratic Republic of Congo in the early 1980s.

There were 14 other "satellite" diamonds cut from the one 890-carat rough diamond, five of which are exhibited alongside The Incomparable Diamond at the ROM.

Other jewels in the vault included pieces by Cartier, Van Cleef & Arpels, the Mirage World Peace Egg and an 82.06-carat black diamond. Stuff you wouldn't see every day in the store windows of Birks.

The exhibition, presented by De Beers Canada Inc., will showcase about 500 pieces from private collections and major museums from around the world, and purports to be the most wide-ranging exhibition ever developed on the allure of diamonds.

The diamond exhibit isn't all about diamonds for show, either. So you may get some insight into their geologic origins, how they're mined, their cultural significance in art, literature and ornamentation, as well as their numerous uses in modern science and technology.

Here's a mini photo slideshow that chronicles the media unveiling of The Incomparable Diamond: