TTC bus and streetcar shelters finally got a facelift today.

About to get on the Queen streetcar just east of Landsdowne, I noticed a maintenance crew busily working at the spot previously occupied by a bus shelter that had been noticeably absent in recent weeks.

The new bus shelters are an extension of the TTC Next Train Arrival program announced last month that will bring us information such as when the next TTC vehicle is to arrive to the streets of Toronto. The displays on the new shelters will also feed us information on delays, helping us make decisions like "Should I wait for the next vehicle, take a cab or walk instead?" 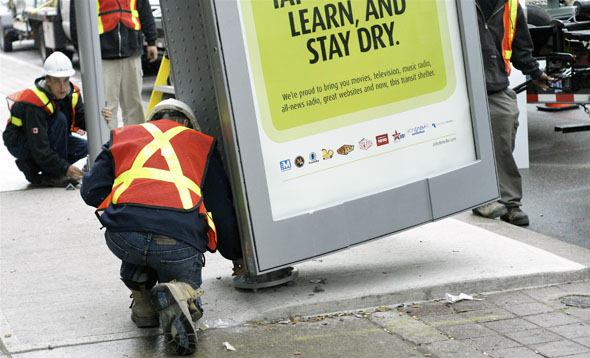 I asked one of the workers how long it takes to put up the new shelter and he said "about an hour." He told me they had just completed a section along Dundas and are working on the entire city's new shelters.

"Eventually, we'll have LED screens on poles or built into all-new shelters that will show the expected time and physical location of the next vehicle," said TTC Chair Adam Giambrone at the launch of the One Stop Network initiative last month.

Implementing this sort of plan is long overdue. But just in time for the inclement weather ahead. It may take a little more time before all the new technology such as a digital readout announcing the arrival times of the next two surface vehicles, but it's coming soon to a TTC route near you.

Getting on the streetcar, it took me past the Dufferin stop, where the old shelter hadn't even been taken down yet. I wondered when they'd get to that stop. And how they decided which areas needed new shelters first.

Is there a ghost shelter spot in your neighbourhood awaiting a fancy new shelter to be erected? What do you think of the new TTC bus shelters?