The Parkdale-High Park riding is a tight race this election with local favourites Peggy Nash (NDP) and Gerrard Kennedy (Liberals) squaring off for the first time. Green candidate Rob Rishchynski and Conservative Jilian Saweczko are running visible campaigns, but are really just battling for bronze.

Nash was first to hit the streets and distribute signs - using leftovers from her previous campaign with "re-elect" stickers added - but Kennedy quickly countered with signs of his own. In a sort of candidate love-fest, it's become standard to see signs for both candidates in the same window or yard.

The campaign took a strange turn with recent vandalism in the riding, but neither candidate seems to be ahead of the other. It's hard to predict what this election will turn on as constituents weigh their loyalty to the incumbent (Nash) and their longtime former MPP (Kennedy).

It's hard to identify ways in which Nash or Kennedy would be remarkably different and both have demonstrated a strong commitment to the riding and the city. The most natural differences are found looking at the candidate's backgrounds.

Nash spent many years as a labour negotiator for the CAW as a colleague of the infamous Buzz Hargrove, and consistently works to protect Canadian manufacturing jobs. Naturally, she also puts an emphasis on the environment, and promises to "build a green economy." She has also garnered a lot of attention as a global activist, including being a leader in making the Dalai Lama an honourary citizen.

Kennedy first made his mark in food banks, most notably being the top executive of Toronto's Daily Bread Food Bank before holding elected office. Although Nash is the incumbent, Kennedy is also running a 'name you know' campaign, as he served as Parkdale-High Park MPP from 1999-2006, when he stepped down to run for the federal Liberal Party leadership.

Kennedy focuses on childcare and higher education, the latter not surprising as Kennedy just concluded his year as a visiting professor at Ryerson University. Along with the rest of his party, Kennedy is also pushing the Green Shift, and in general the economy and green issues. He also promises investment in transit systems.

Although Kennedy was a longtime and well-liked MPP, he played the crucial role in making Stephane Dion the Liberal leader, besting both Bob Rae and Michael Ignatieff. Whether his role, along with the generally low appeal of Dion, will hurt Kennedy's election bid also remains to be seen. 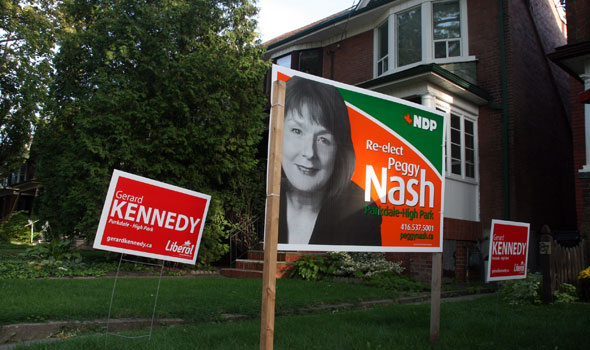 Rishchynski and Saweczko have both run and lost in the riding previously, albeit with disparate platforms. Naturally, Rischynski focuses on the environment and is enjoying a boost in popularity from Elizabeth May's national spotlight. Saweczko, on the other hand, has mostly been quiet, skipping a CBC Metro Morning debate with the other candidates and only recently getting yard signs in a visible number of homes.

After watching some local business owners enthusiastically add Peggy Nash signs to their windows shortly after the election call, now each of those windows feature a Kennedy sign, and some hit a left-wing trifecta with a Rishchynski sign as well. Although some businesses may be doing this to cater to as many clients as possible, the same trend is seen in many front yards; perhaps families are split on where to send their allegiance.

"Harper cannot remain Prime Minister," says my landlord, who is still unsure which way he wants to vote within the left-leaning contingent. Unlike most of his neighbours, he hasn't put any signs in his yard.