It was interesting to see candidates vying for attention at the Trinity-Spadina debate held Sunday as part of PS Kensington. The incumbent NDP candidate Olivia Chow took on her competitors (except for the absent Conservative candidate Christine McGirr, who isn't much of a competitor in this riding anyway) to the background noise of the pedestrian festival, and at the mercy of the Kensington community.

The debate was hosted by Michael Louis Johnson in true PS Kensington form, out in the street and amongst the crowd. Heckling was not only allowed, but encouraged; however the candidates did well in trying to focus on relevant Canadian issues, and not merely their party's leadership concerns. 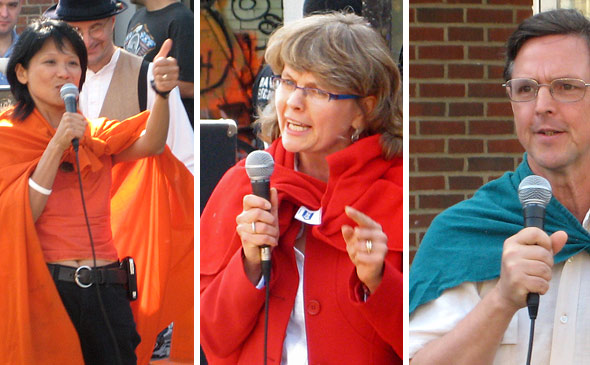 The set-up was absolutely Kensington, complete with a couch for the audience and capes for the candidates. One of the funnier moments involved Liberal candidate Christine Innes pleading with the crowd to let her speak, right before Michael Louis Johnson jumped in to support and encourage further outbursts.

Another humourous moment came when Innes stated that she didn't believe the economy was in as much trouble as everyone thought, and was met with one (very close) bystander's raucous laughter. Good times if you're not a Liberal supporter!

In general, as Green candidate Stephen LaFrenie pointed out, the Trinity-Spadina riding has shown the green initiative that all of Canada needs to keep moving towards. All three candidates were in support of exploring renewable energy sources, although Innes seemed fixed on the nationalization of oil, whereas LaFrenie resolutely stated that the future lay in our other natural resources. All three also opposed nuclear energy, although again Innes did not want to dismiss any potential opportunities.

Olivia Chow did seem to hammer home support for her husband Jack Layton, but her knowledge of community issues was very consistent and demonstrated her experience in this riding. She made an effort to address the problem of student debt, and did a nice job of linking our economic crisis with the overlooked value of a sustainable arts and culture economy - all very well received by the crowd.

Although Chow left the debate early, both NDP and Green party platforms came off as aligned in many respects, and LaFrenie did comment to Chow that he hopes the NDP will ensure responsible opposition to the majority should the vote fall that way. Overall, I was impressed with Chow's commitment to increase our focus on solar, wind and other energy resources, in addition to supporting infrastructure for bikes, transit and alternative transportation.

One interesting point came at very end, when the issue of proportional representation was raised by LaFrenie. Both the crowd and LaFrenie seemed to strongly support this idea, while Innes tried to warn of a well funded 'right wing' takeover and further division under the representation model. LaFrenie countered by stating that he does not believe Canada will vote for any extreme right wing take over, and that this fear was a lousy excuse not to change the system.

In an otherwise predictable debate, it was surprising to hear LaFrenie agree that although as much as 5% of the vote should be the minimum for proportional representation (the Green party holding only 4.6%), this was a much fairer way to represent the choices of the Canadian public. Since neither the NDP nor Conservative representatives stuck around long enough to hear this point, let's hope next time all the candidates make these intimate public debates more of a priority.