Update: [from Tim] It has come to our attention that there are inaccuracies with this post and that the author was actually late in arriving to the event. Our apologies. If anyone would like to submit to us an alternate review of the event we'd be happy to post it to the site

Improv Anywhere unleashed their MP3 Experiment in Riverdale Park today, which brought much colour and merriment on a Sunday afternoon, as well as dozens of stray balloons on the field.

Almost 300 turned out to take part in this mischievous endeavour that played out as more of a group game than a scene of chaos and joy in a public place, as was intended.

The idea was interesting, but in execution, it could've been much more. The voice on the free download got annoying fast, but the players involved didn't seem to mind and followed along to the silly instructions not too dissimilar from some drunken party Twister games, only more props and strangers were included.

By the end, dozens of balloons were let loose in the field, which allowed the younger kids a little more excitement chasing them down after the event.

Others chose to enjoy the remaining sunshine playing frisbee as mixed groups of red, green, yellow and blue shirts dispersed across the park. 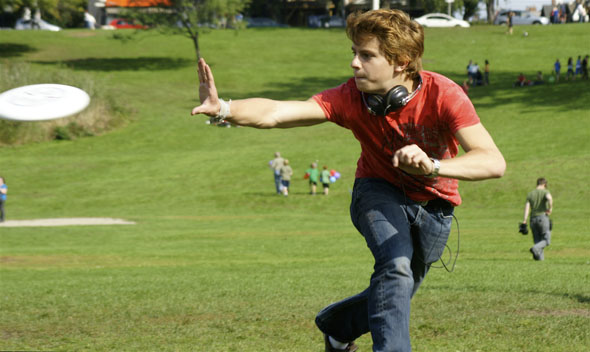 This idea would have worked better in a more centrally located place with more walk-by traffic. Somewhere like Queen's Park perhaps. Still, it proved a fun and unusual way to spend an hour or so on a Sunday afternoon in Toronto.