An unconfirmed tip we just received suggests that KITT from the TV series Knight Rider was stolen during a publicity event outside of Union Station in Toronto. KITT has been in town this week promoting the new television series on E!

In the video, someone appears to hop into the idling vehicle and speed off, and some panic ensues.

The tipsters themselves suggest that it might be a publicity stunt, so take this with a grain of salt until we can get confirmation.

Update (3:40pm):
Police Constable Dixon at 52 Division could not confirm that a theft report was filed without a license plate number, and is unaware of any reports of the above incident.

Update (4pm):
Calls to Canwest and Global TV to confirm the incident have so far proved fruitless, but I have left a voicemail with the director of publicity for Global Networks and E!

An employee at media relations at Global Toronto (who wishes to remain anonymous) has told me that she has received a number of calls from the media, and that Canwest currently "doesn't know where the car is," and is "trying to figure out what has happened."

Update (4:45pm):
Photos of the incident have appeared on the Myspace page of local electro hip-hop group The Royal Society. 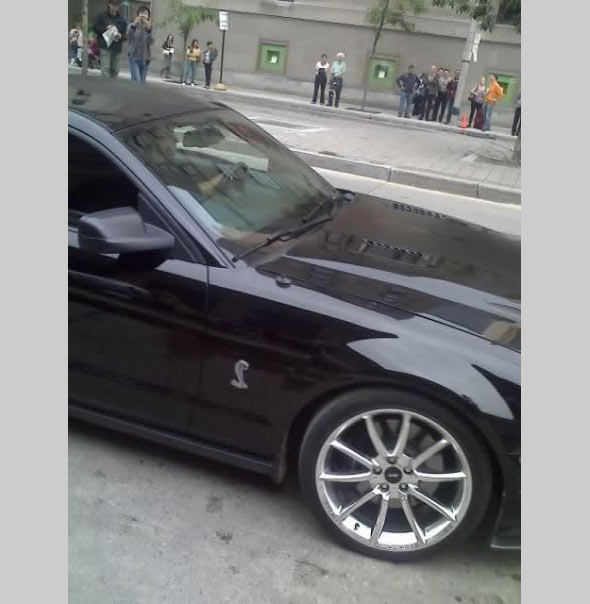 Update (5:01pm):
A nameless poster posted about the supposed incident on the E! blog at 4:48pm.

Update (5:10pm):
Repeated phone calls to the director of publicity for Global Networks and E! have gone unanswered. She's either loving this (if it was a planned stunt) or hating this (if the car was actually stolen).

Update (5:32pm):
My 7-year old nephew says "if that really happened, or even if they're pretending, the TV show is terrible and not worth watching." And I concur.

Update (6:00pm):
I just chatted with a news tip screener at 680news, and they aren't running the story because they too haven't been able to confirm it.

The likelihood that this was a real theft is near none.

Update: (9:00pm):
I've had a chance to speak with members of local electro hip-hop group The Royal Society about a fortunate side-effect of the stunt - their Myspace traffic went through the roof today.

Update: (6 days later)
Canwest is now admitting that it was a PR stunt, which explains why Global
and E! haven't returned any of my phone calls for a week. Lame.

Photo courtesy of The Royal Society.