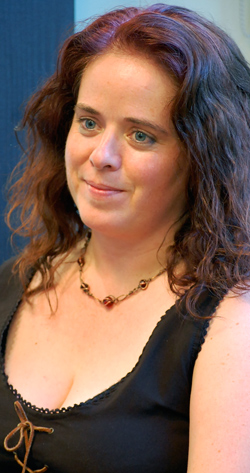 What neighbourhood are you from? Right here - I live downtown.

What do you 'do'? Career counsellor

How long have you been in Toronto? Since 1990

I was born in Massachusetts and grew up in a very political family. Then, when I was 17, I went to McGill. When I crossed the border, I felt like I was home. Now, I've lived in three provinces - Quebec, Manitoba and now, Ontario. When I came to Toronto, I was a student, then a parent, then a coffee shop owner and then, I discovered my career as a career counselor. (I used to have a cult following from my coffee shop!) At the age of 40, I went back to school at George Brown College. It was hell but gave me the job I wanted.

I'm also a writer. Whenever I can steal time, I work on my novel which is set in Toronto (in a parallel universe). I also talk to everyone - all the time.

Anything I want to do, I can do here.

Start by going to St. Lawrence Market for fresh croissants and coffee and then, walk along Front Street to see the Skydome and CN Tower. I'd then go down to the Harbourfront for lunch at Il Fornello to overlook Toronto Island. Then, I would take the subway to Yonge and Bloor and walk through the Annex and Mirvish Village, then down to Queen West and have dinner at Jules, a nice French restaurant, on Spadina. We'd walk home and hopefully, there would be something going on at Nathan Phillips Square or Dundas Square. Finally, we'd go to my rooftop garden to have a nice coffee or wine (depending on who it is).

I was at the Fetish Fair recently with a friend.