Pedestrians in Toronto have a new way to cross the street at Yonge and Dundas. So now you can go from the AMC Movie Theatre to the Toronto Eaton Centre without having to wait at the corner by Forever 21.

The city's new Pedestrian Priority Phase crossing, unveiled this morning, enables people to get across the intersection in all directions, including diagonally. Also known as a Scramble Phase crossing, this method of crossing a busy intersection is already popular in many cities around the world including Tokyo, Japan and Aukland, New Zealand.

"We think it's a great idea because this intersection sees 100,000 pedestrians a day," said councillor Kyle Rae, who was on hand to help launch the initiative this morning, along with councillor Glenn De Baermaeker, who is also the head of the city works department.

"There is so much activity at this intersection," said De Baermaeker. "This will increase effectiveness and give a greater priority to pedestrians. It will make crossing the street faster, more efficient and safer for pedestrians."

How will Toronto pedestrians, cyclists and motorists take to the new signals? Continue reading for more photos and reactions to the new scramble crossing.... 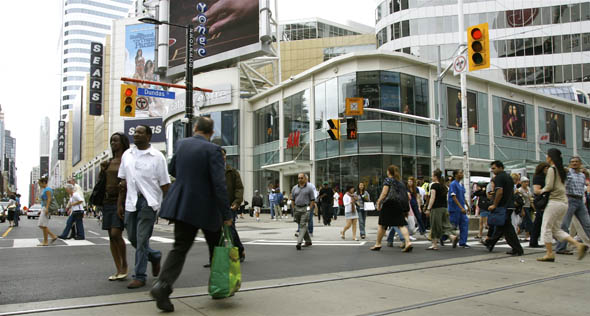 Noticeably missing in the intersection were lines that indicate crossing is possible in both diagonal directions. It looked like they were going to paint lines right across but stopped about six feet in.

Gary Welsh, general manager of the city's transportation services, said that they will monitor the operation and may still extend lines right across the road. There were traffic assistants on hand to initially provide help to pedestrians crossing through the intersection.

"I've seen this before in Washington, DC 15 to 20 years ago," said Harvey Goldenberg, a pedestrian about to cross the intersection. After crossing he observed, "Crisscrossing diagonally both ways, somebody's got to give way or they'll collide.

Goldenberg also thought this may pose a challenge for cyclists and drivers. "There's too many lights for a driver to look at. There's already too many lights to begin with at this intersection with all the flashing ads." 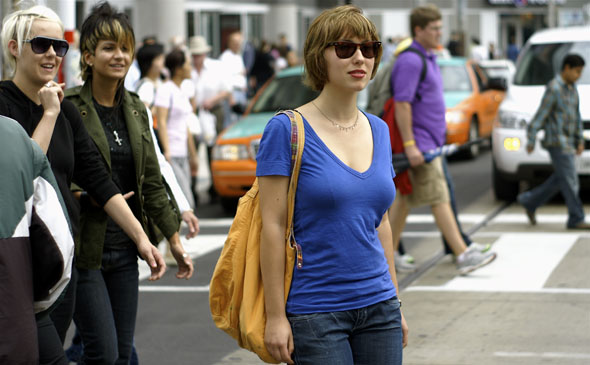 Katie Switzer, 18 (pictured above) thinks it's great for pedestrians. "It's crazy, but it's awesome. It reminds me of some parts of Paris or New York, where people are just walking everywhere."

"I think it's good because you don't have to waste your time crossing twice," said Michael Maier, 26, who is visiting Toronto from Munich, Germany.

But not every change of signal allows people the chance to cross this way.

So you may have to wait for the light to change once anyway if you want to walk across the intersection diagonally. So much for saving a minute. 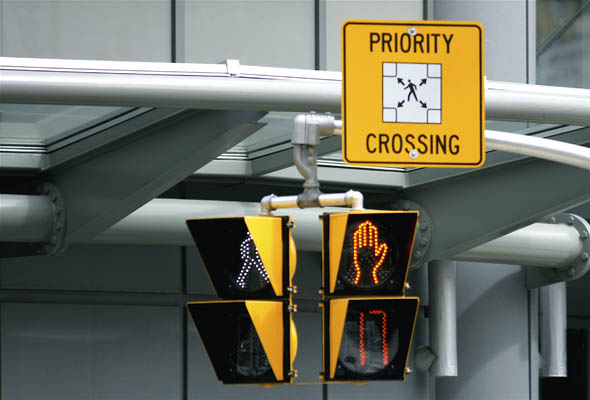 "What difference will one minute really make in your life," asked Uliana Edelman, 19.

"I think it's stupid because it's not busy enough for a crisscross and it's worse for traffic," said Khan. "It's definitely better for pedestrians, but it's not needed. It might save you a minute."

Matthew Blackett sits on the 14-member Toronto Pedestrian Committee, which gave its approval and feedback to the initiative. "This is one of the few unique places in Toronto where pedestrians are number one," said Blackett. "Altough there's also an additional 28 seconds for cars, allowing them 80 seconds instead of 60." 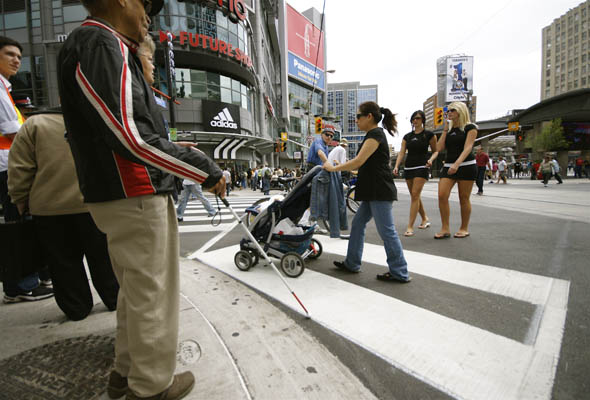 Perhaps the biggest challenge was for the visually impaired. I observed an elderly man with a cane, aided by a woman, look around in confusion as people scrambled across the intersection in all directions.

"We waited and crossed the old way because it was easier," said Willa Lee, who helped partially sighted Davis McCarroll, 91 (pictured above) cross the street. "Once you get the rhythm of it, it makes sense, but I didn't want to take the chance." 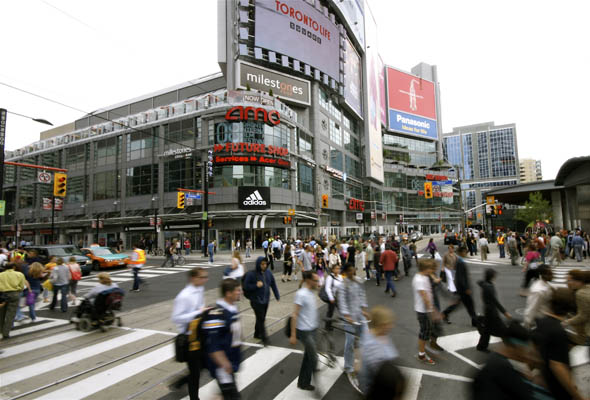 I asked P.C. Mig Roberts of traffic services if he thought this new initiative was a success so far. He paused and hesitated before answering. "Any time the city can do something to enhance public or pedestrian safety, it's a step in the right direction."

This type of crossing was once known as a Barnes Dance intersection, named after Henry Barnes, a prominent traffic engineer, who was credited as the first to use this system in the United States in cities such as Kansas City, Denver, Baltimore and New York City.

The phrase Barnes Dance came into play after a newspaper article that stated "Barnes made the people so happy they're dancing in the streets." Other U.S. cities have followed suit, including San Francisco, Beverly Hills and Miami.

Here's a look at a scramble crossing in Shibuya, Tokyo:

Toronto has plans to implement this type of pedestrian crossing in intersections at Yonge & Bloor, Bay & Bloor and Bay & Dundas.

What do you think of the new scramble crossing? Does it improve the intersection? Does it confuse you? Do you think it's good for Toronto?