Several hundred supporters at the Empire Lounge in Toronto cheered loudly last night, as Barack Obama delivered a powerful speech from Invesco Field in Denver. As 80,000 gathered around Obama, Democrats Abroad in Toronto joined countless thousands around the world to watch the speech live, cheering and applauding as if Obama could hear them. 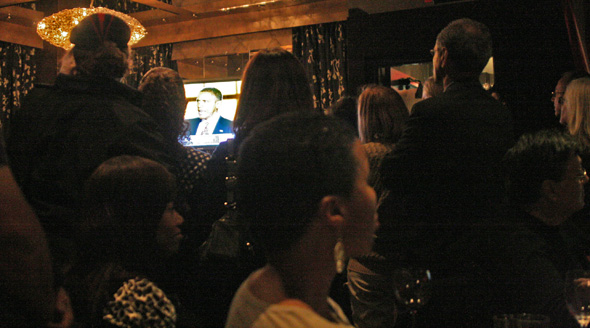 The audience in attendance in Toronto are certainly party and Obama faithful; this was not a night where he needed to win over those who traveled from near and far to watch with the crowd. It was, however, a night to rally as many supporters as possible to action, to help get out the vote, and to take ownership of the campaign.

Obama made an emphatic point that this election is not about him, but about his supporters, and about the everyday people in America. All while trying to woo the estimated 8.5% of voters who are still undecided, and it must have been a persuasive speech from one of America's most gifted orators. 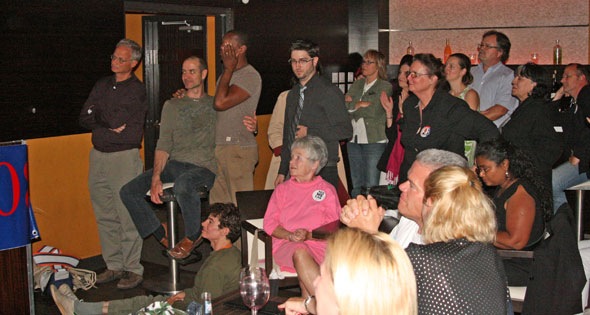 Claims from Obama that this election is about a wide cross-section of America rang true, even in the highly partisan ranks of the Democrats Abroad audience. The gray (and white) haired folks with renewed passion were seated next to youth who looked like they may be voting in a presidential election for the first time. The biracial gay couple was as moved and cheering as loudly as the more traditional couples, with a shared belief in Obama's message of change, of a more tolerant America and of America becoming, once again, a better global citizen.

Whether all of the festivity turns into more volunteers, more voters and ultimately, a win in November's election remains to be seen. But the voter registration table was full all night long last night, and Obama delivered on all the right notes to launch his official campaign for the White House.