There's a modern day Houdini and she's performing at the Canadian National Exhibition this year.

Escape artist Kristen Johnson (pictured on right) performs with illusionist Kevin Ridgeway in a show that has toured extensively throughout the United States and Australia.

The Indianapolis, Indiana couple have toured with their 1 3/4 hour-long Living Illusions theatre show for the past eight years. Their half-hour show at the CNE is performed daily outside The Automotive Building.

"We've had over 3,000 people a show here," said Johnson. "People are intrigued. We're honoured that people just stand on the concrete in the sun to see our show."

Ridgeway starts by warming up the crowd, getting the kids to do funny things with their hands. Then he does some unbelievable things with a Coke can.

Without giving too much away, I can tell you there's some intricate lock-picking and breath-holding involved in the rest of the act.

Keep reading for my interview with Ridgeway and Johnson and more photos from their show.... 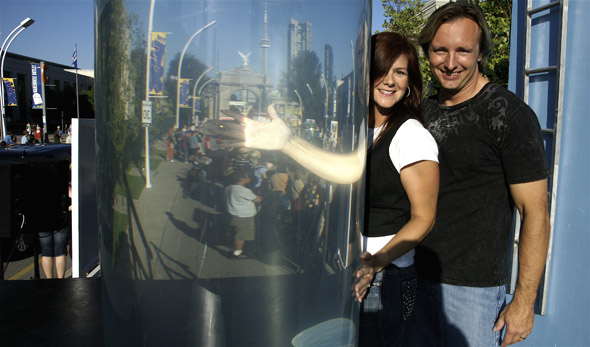 "When I'm doing the (Chinese) Water Torture Cell stunt, the psychological impact of being chained up and enclosed in that cell is exponential."

Don't try this at home. Johnson trained with a dive master to learn to hold her breath underwater for over three minutes. "It's very calculated," says Johnson. "I've trained really hard. If there's something unsafe to do, I wouldn't attempt it.

"Holding my breath is the easy part," says Johnson. "It's much harder when we add the psychological aspect to it, making it more taxing physically and emotionally."

How does she get through it?

"I'm talking to myself throughout the act," says Johnson. "I also pray to Jesus Christ each time before I perform."

Houdini performed his version of the act with the tank covered. "We don't cover it and people respond to it differently," says Johnson. "Some cry, some turn away and don't look until it's over."

Houdini is said to have performed this stunt 1,000 times. Johnson's has already done this stunt 520 times.

"The hardest time for me was when I did a show live at 6 a.m. on network TV to kick off an escape convention. I didn't sleep the night before. It was nerve-wracking."

Here's a mini photo slideshow of the Illusionist and Escape Artist at the CNE:

You can see Ridgeway & Johnson perform daily at 4:30 p.m and 7:30 p.m. (plus an extra 1:30 p.m. show on weekends) on Princes' Boulevard outside The Automotive Building.

You really need to see this stunt in real life to fully appreciate it. If you can't make it to The Ex this year, check out this footage of a previous attempt: