Over 100 counter-protesters showed up to make sure that members of the Kansas-based Westboro Baptist Church were outnumbered at the launch of the Summerworks play, The Pastor Phelps Project: A Fundamentalist Cabaret, where they were purported to protest outside The Cameron House on Queen St. W. last night.

The Westboro Baptist Church gained notoriety for their anti-gay protests at funerals of people who died from AIDS. According to a press release on their website, godhatesfags.com, they're hoping to stage a protest in Winnipeg tomorrow at the funeral of Tim McLean, the man stabbed to death and decapitated on a Greyhound bus July 30.

Meanwhile, inside The Cameron, Corin Raymond and the Sundowners were in between sets during their regular Thursday night gig when some of the protesters outside came in for a drink, or to see if they could get in to the play.

Not missing a beat, Raymond launched into his second set, saying "We'd like to perform some religious material.... Is that a no-show for the Greensboro Baptist Church?"

The night's show sold out, thanks in part to the extra publicity. "We sell half the theatre by phone and online prior to the day of the performance and the rest one hour before the performance," said Avery Swartz, Summerworks publicist. 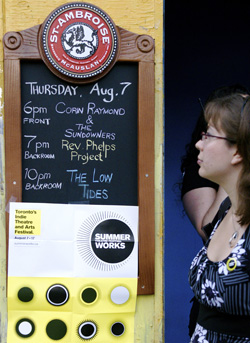 "Already 25 were in line at the door at 7 o'clock, so we had to turn people away." Tickets for remaining shows are still available, but you may have to line up an hour before the show, which runs until August 17.

Eva Haralambidis came to see the band, but was surprised so many people showed up. "It doesn't usually get so packed in here with people this agitated."

One of the disappointed theatregoers was Ray Fadel, 48, who just moved to Toronto from Florida last year.

"I'm sick of all the Jesus bumper stickers in The States," said Fadel. "Someone just told us about the play last night and I thought I'd check it out, but it's sold out."

One of the lucky ticketholders was Bea Pizano, 48, who was attending her third show of the day.

"I'm just interested in the show itself," said Pizano. "I love Summerworks because you get to see a variety of people telling stories in different ways." 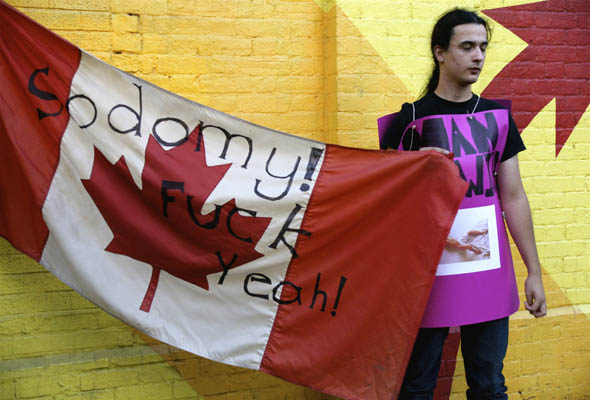 The play in question is a complex piece of theatre, directed by Alistair Newton that aims to explore multiple sides of the controversial Westboro Baptist Church. 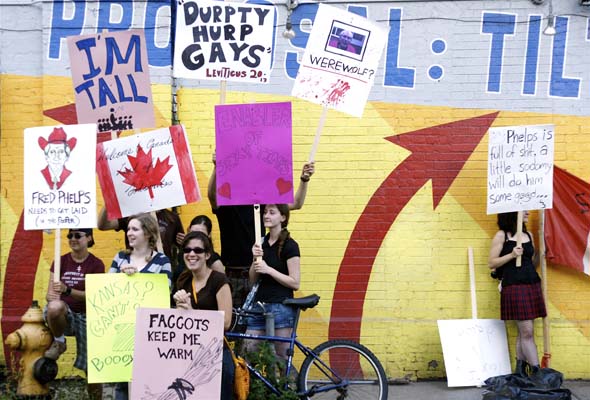 By the time the play began, it was obvious that the play protesters weren't showing up. 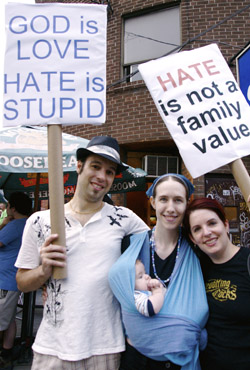 "Phelps got turned away at the border," said P.C. Roger Bilinthorp of 52 division, who was among 10 police officers present the protest, to ensure it remained a peaceful one.

Robin Frolic, 28, heard about the protest from friends' blogs. She held a placard that read "Hate is not a family value." Frolic had her four-month-old son Connor with her (pictured right).

"It's his first protest," said Frolic. "My older son went with me to a pro-choice conference when I was six months pregnant with my previous child, who is now four years old.

"We spent 40 hours on buses to Washington, DC for a pro-choice rally."

Cameron Dunn, 29, was visiting Toronto from Detroit and just happened to be in the area, looking for vintage clothing shops.

"I think it's important that people non-violently express how they feel," said Dunn. "It's necessary for society at large to be aware of how minorities feel."

Just outside the entranceway of The Cameron, I catch up with David Baxter, 53, who plays guitar and mandolin with the band. He tells me a story about an encounter with what could've been Phelps and his ilk. 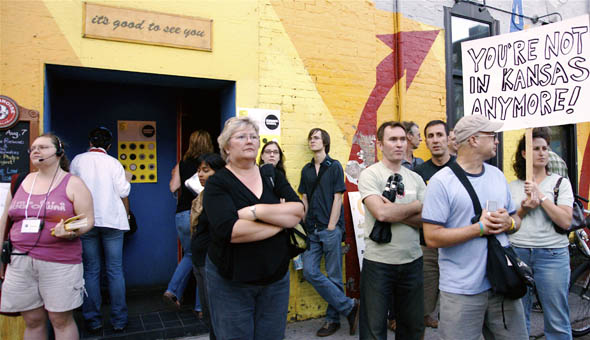 "I was in Austin, Texas about five years ago for the South By Southwest festival. I got up early and went for a coffee and saw about 500 or so people in this parade with placards saying 'God Hates Fags.' They were all fathers and sons, no women. It didn't create much of a fuss there. There was no press."

But things are quite different in America. Thank God for that. 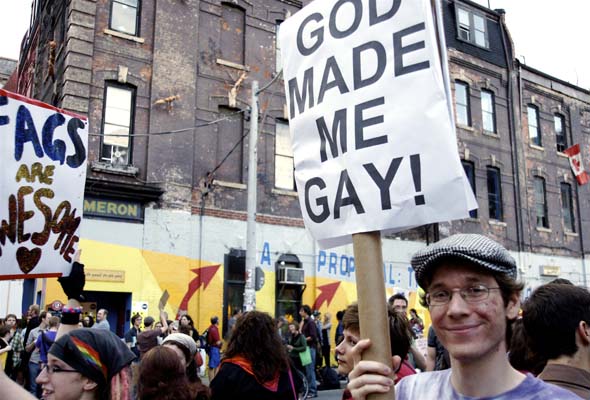