The TTC, also known as The Better Way, hasn't been able to catch a break recently, as word has been released of yet another TTC employee indiscretion. This time it wasn't a driver starting happy hour a few hours too early, or a mysterious streetcar collision at Bay and Dundas.

It was an employee was arrested at Wilson Station for allegedly possessing and selling counterfeit tickets. 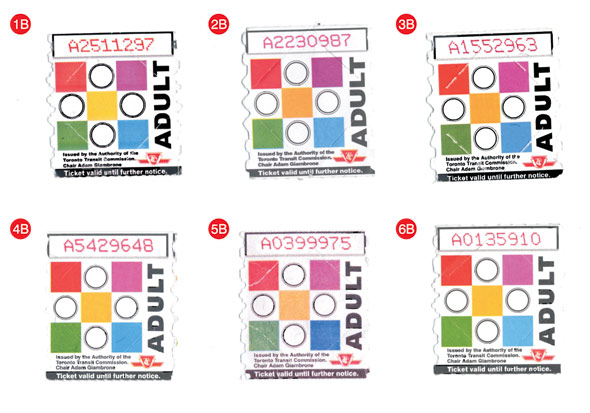 While this is the first time that the TTC Special Constables have investigated a TTC employee for this charge, it wasn't the first arrest related to forgery this year. Another forgery ring was busted in March distributing very realistic fakes without any of the equipment that the TTC employee would have access to. So one can imagine that the tickets the TTC employee was selling from her booth were close to the real deal. The above image, provided to us by the TTC, shows forged tickets aside a real one, which demonstrates how difficult spotting a forged ticket can be (the only real ticket is 4B).

This and other forgery investigations have reopened the focus and discussion on how to combat forged tickets which cost the TTC anywhere from $3.6 - $4.8 million in fares a year. One idea is to eliminate tickets completely and (hopefully) move towards a pass system or fare card in the near future, although in my experience, anybody living downtown who frequents any alternate exits rarely uses tickets anyway.

It looks like adult tickets will be phased out by September. The token prevails once again.