The bombing of Air India Flight 182 on June 23rd, 1985, did not compare to 9/11. However, if any event is the one that lets Toronto see itself reflected in NYC's suffering, it is the events of 23 years ago... and while they may not compare, comparisons can certainly be drawn up. The killing of all 329 people aboard Flight 182 had previously been the worst terrorist attack to have involved aircraft, and it remains the worst mass murder in Canadian history.

In spite of the magnitude present in those facts, I'd never personalized this reality in any way (a common thread in Canadian treatment of this part of our history). The first time I did really feel something in relation to this attack was when I came across the little-advertised memorial site located in Humber Bay Park East in southern Etobicoke.

I was struck by how optimistic and positive the memorial managed to be when making reference to something so horrible. 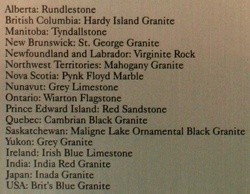 The memorial is based around a sundial centrepiece which specifically marks the passing of the sun on June 23rd and is supported on a base of stones of various types from all the Provinces and Territories as well as India, Ireland, Japan and the USA, representing the different countries affected.

Adjacent to this is an inscription wall with the names of all 329 people aboard Flight 182, plus two baggage handlers killed by a related bomb in Japan. The entire site is oriented towards both the water and Ireland, symbolizing the loss of the plane off the Irish shores, and the memorial also resembles a similar one built in Ireland in 1986.

Consciously located in a serene lakefront park with a view of a lagoon and the lake beyond it, "the Air India Memorial creates a place of peace and repose as a counterpoint to the violence of terrorism. It does not focus on that act, rather it appeals to the better parts of the human spirit in its focus on repose, geometry and celestial reference ... The plaza ... is intended to evoke a temple-like effect, [with] a place for observation and reflection, and ... a small memorial garden." (Public Safety Canada press release) 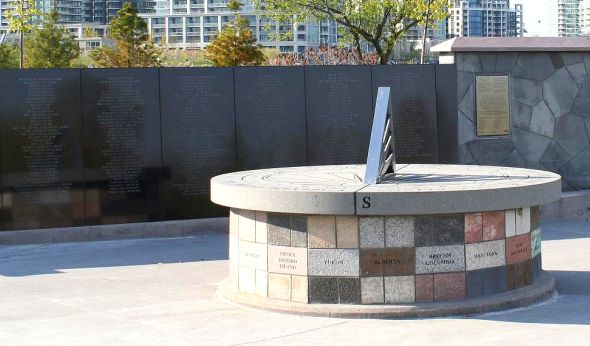 The storyline of the investigations into both the attack itself as well as the failure of our domestic intelligence service to prevent it has been a long one and has generated a lot of media discussion since. You can read through that stuff if you like on the CBC's in depth coverage site, but I've personally never connected emotionally with any of that information - my birth only predates the attack by a few months and the whole thing has never been anything to me except concept in newsprint.

Understanding how to prevent this type of atrocity and bringing people responsible for this sort of thing to suitable and timely justice is obviously very important, arguably most important. But I really appreciated the attempt at encouraging people to look on the bright side and bring their minds around to the power of love and unity in human existence, rather than installing a symbolic graveyard for people to feel scared and hateful in.

It's certainly an easy topic to get angry about. Instead, take time to peacefully reflect at Toronto's memorial site and be glad that you're avoiding the arguments taking place in Surrey, BC, where a first-ever memorial service being held in a Sikh temple is being overshadowed by the fact that the temple's dining room contains a photo of Talwinder Singh Parmar (killed without a standing conviction by Indian police in 1992), alleged mastermind of the bombings.

Hopefully, the calmer mentality that devised the design and poetic inscriptions of this site will have increased success in prevailing over the hatred and divisions that required it's construction in the first place, and the power of shared positivity will continue to bring sworn enemies together to offer each other blessings for the future. (Check CTV's website if you'd like to see videotaped speeches from the 2007 unveiling of the memorial.)

Those wishing to reflect on the more troubling, unsettling and significantly unresolved nature of the event can catch the new Air India 182 documentary airing next Sunday (June 29th, 2008) at 10 p.m. on CBC Newsworld.