You might have already heard of the bike sharing program in France that has been a huge hit with Parisians. Vélib' (short for vélo libre) was launched last year in Paris with around 10,000 bikes available at the near 750 stations for short term rental. That number has since skyrocketed to 20,000 available bikes and almost 1,500 automated rental stations, and it's been cited that the program has resulted in a 10 time increase in bike usage across the city.

Those numbers aren't anything to cough at, so it's no surprise that the idea is starting to take root in other cities, including Washington DC which just launched its Smart Bike DC bike sharing program in partnership with Clear Channel Outdoor. For about $40 a year, Americans in their capital get access to (an admittedly meager) 120 bikes at 10 locations around the city - but hey, it's a start.

That begs the question - with no shortage of bike advocacy groups and a renewed interest in cutting carbon - where's our bike sharing program?

The now-defunct Bikeshare went under a couple years ago due to funding problems, but presumably that's only because the city was looking to get corporate sponsorships for the program. Ontario Power Generation was one to sponsor the program while it was still around, but what's to stop Toronto from signing a similar deal with Clear Channel (or Astral) that they struck up in DC? 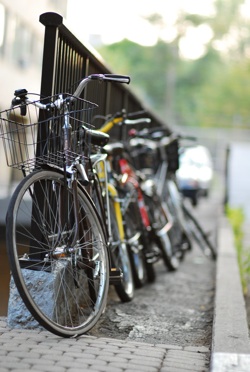 We've had our fair share of run-ins with ad companies in the past, and the contract with Astral Media is going to result in some pretty cool looking street furniture (including auto-cleaning washrooms).

Despite being occasionally blasted for our poor urban planning, Toronto has an excellent infrastructure for installation of automated bike rental stations. Think of all the possible communal areas where they could be located - Union Station, Harbourfront, Nathan Philips Square, Toronto Life Square, Trinity Bellwoods, St. James Park, St. Lawrence Market, Yonge & Eglinton and the list goes on. They're completely automated so they require no human resources and minimal maintenance (which would be funded by Astral or Clear Channel).

Stations could be extended outside the GTA - west out towards Mississauga, east towards Pickering and north out to Markham. Vélib' allows riders to take the bikes out for up to three hours - more than enough to make a trip just outside of the city and back.

Some may argue that a large majority of traffic in the downtown core comes from the suburbs, but even if that's the case, that number is going to change (and is already changing) drastically over the coming years as the condo boom really starts taking effect. Parking spaces aren't getting any cheaper when you buy into a new condo - now starting at a cool $30,000 to $32,000, and an influx of personally owned bikes will eventually present additional challenges in terms of where to park all the bikes. A decentralized system will help to mitigate these problems, and make commuting by bike possible for the financially challenged.

Car sharing programs like Zipcar and AutoShare are good baby steps, but to truly make any sort of social and environmental impact, it's going to take more innovative ideas. It's about time Toronto steps up and puts a stake in the ground as being a progressive, forward-looking city with regards to urban transit.

With active community organizations like Metronauts working in tandem with regional transportation planning authority Metrolinx, hopefully we can see innovative and affordable systems such as bike sharing come into play over the next few years in the GTA.