"The Best Corner in the World"

After several months of lane closures, holes in the road, sidewalk blockages and plenty of excess "caution ribbon motif", it's no wonder Torontonians are getting fed up with the veritable clusterfuck that is Yonge & Bloor.

Lauded by the new, entirely over-hyped 1 Bloor condos as the "best corner in the world", they'd be hard pressed to even define it as a corner at this point, with fences and pylons blocking nearly every passage through the intersection. I've taken great joy (and an equal amount of shame) in reading blogger bstewart23 tearing the intersection a new one every so often.

More photos and excerpts of his frustration after the jump. 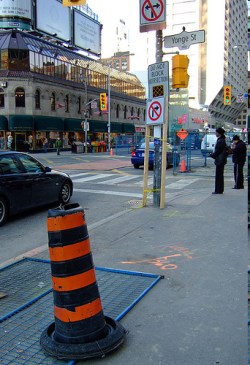 At right, a photo from bstewart23's latest blog post about the intersection, captioned:

"Not only has the construction crew placed a helpful wire mesh on the sidewalk -- should a sinkhole suddenly appear, a pedestrian might just fall in -- but the NO RIGHT TURN sign has been safely anchored to the street light with -- what else? -- yellow CAUTION tape. The NO RIGHT TURN SIGN, it should be noted, was installed by the Department of Redundancy Department, though one could argue -- as one is wont to do -- that drivers who completely ignore the upper sign will pay scant attention to the temporary addition.

The "DO NOT BLOCK INTERSECTION" sign, directly in front of the construction blocking the intersection, was surely someone's cheeky attempt at humour."

Unfortunately the intersection is a shining example of the poor state of roads in the city and what has seemed like an endless mess of construction and road closures.

In this case, it's not really clear to me what they're doing at the intersection but it appears that new sewage and water pipes are being installed (presumably to accommodate the behemoth tower that will soon cast a long shadow down Bloor Street).

Shoddy and broken pylons have become a trademark of Toronto's streets and highways, frequently strewn about the road or lying along side curbs destroyed by careless and frustrated drivers. As if these weren't enough of an eyesore and an affont on public space, don't forget about the trucks and police cars that are constantly blocking off a lane or two of traffic and often a good chunk of sidewalk (as is seemingly always the case in front of the TTC's Bloor Station entrance at the North-East corner).

bstewart23 continues, "This is the most famous intersection in Canada. It's hard to imagine any justification for the glacial pace of the repair work or how it is that an allegedly First World city can look so sloppy, so in disrepair and so... ugly for so much of the year. "The Best Corner in the World"? Hilarious."

Thanks to bstewart23 for the photos and posts linked above.