U of T Sit-In Protestors Evicted by Police

Thursday, a group of 35 University of Toronto students organized a protest in Simcoe Hall, outside the president's office, seeking to speak to president David Naylor about current tuition fees and about a planned increase they wanted to see dropped.

Perhaps they were also on some level hoping to get in on some of the sit-in success at York last week, but this situation ended quite differently.

Video of what some students are describing as police brutality after the jump.

1) To be granted a meeting with President David Naylor;
2) To have the proposed fee increase removed from the University Affairs Board meeting, scheduled to take place on March 25; and
3) To be given 15 minutes at the University Affairs Board meeting for a presentation and discussion on broader issues of access to education and the impacts of high tuition upon students, families and communities.

I am definitely sympathetic to the impact of the high price of higher education on students individually and communities as wholes, but I think my immediate response to the video is "...what brutality?" 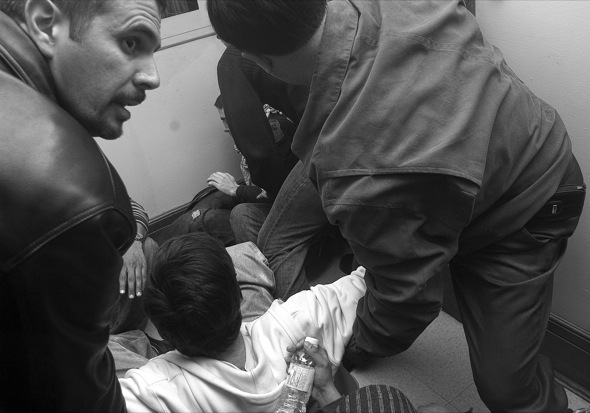 I mean, it is unfortunate in my eyes that those goals weren't achieved, although I'm not sure I would've expected this to bring them about either. I don't think police carrying people who are resisting passively counts as brutality by any stretch though, and the fact that they seem to simply be doing a really shite job of actually being able to pick anyone up isn't quite the same as them whipping out billy clubs.

I would like to see some inroads against tuition fee heights and hikes, but I'm not sure what tactics would bring that about. It kinda looks like we can cross this method off the list, though, with limited exceptions I think protest like this really fails to appeal to any second or third parties.

The anti-sweatshop rally last week at York out of desperation after years of being ignored, going and demanding something that could very reasonably be immediately granted, made sense and was successful because of that. The anti-imperialist rally this week with a student using a megaphone outside the president's office to demand that York cease all forms of direct/indirect support of the wars in Iraq and Afghanistan wasn't really as much of an "activist surgical strike" and didn't really accomplish anything. 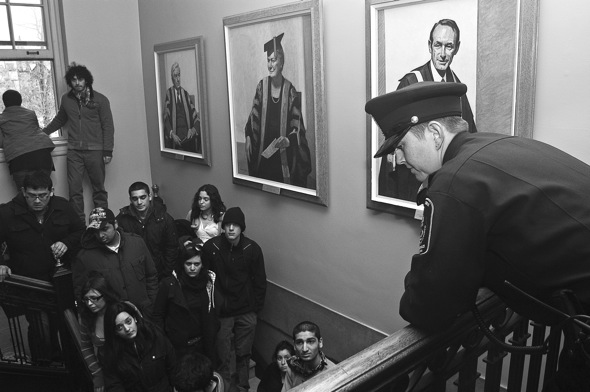 I hope that eventually anti-tuition fee activism does find its niche, because it is truly needed in Ontario and in particular at U of T, and the protests and lobbying done so far hasn't seemed to get students very much.