About 150 protesters braved the -23 degree windchill Sunday morning to picket in front of The Church of Scientology's Toronto headquarters.

Most of them wearing masks or covering their faces with bandanas to hide their identities, they chanted slogans like "We've got a hard-on for L. Ron" and "Xenu! Xenu! Xenu! in front of the Yonge and St. Mary offices.

The crowd cheered at each passing car that drove by and honked in support of placards like, "Honk if you think Scientology is silly!" and "Honk for Xenu." Some of them were obviously just doing it for the lulz.

Masks were worn to hide protester identities so prevent anyone from being singled out and harassed. Collectively, they wanted to appear as a large crowd of anonymous protesters. This went in keeping with the somewhat bizarre call to arms videos posted on YouTube about three weeks prior to the demo.

The Toronto gathering was one of about 100 held simultaneously around the world. These large rallies, also called raids by organizers, realized almost 10,000 total protesters at gatherings in the U.S., England, Scotland, Netherlands and Australia.

After about an hour of observing the protest I ran into Greg Haglund.

Haglund, 57, was one of the original critics of The Church of Scientology (hereafter The Church) and a picketer from 1997 to 2003.

He showed up at the scene of the protest but wore no mask. Not wanting to be singled out, he stood aside from the protesters but within earshot.

"I didn't organize the protest and I'm not running it," said Haglund. "I showed up to show them I'm not 'The Who' they're trying to single out."

Haglund says that The Church of Scientology is a cult of surveillance. "They're trying to find out the key person who's leading the protest to neutralize the enemy. They want to take down those who rise up against them."

I'm beginning to get a better understanding of the protesters' masks and reasons to remain anonymous. 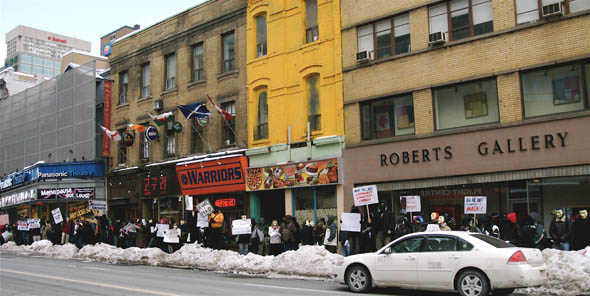 We took temporary refuge from the cold and crowds in a nearby cafe, where he explained some of his own history of being harassed by The Church.

"They followed us home, picked through our trash, found out my wife's medications and tried to get her fired from the school board," said Haglund. 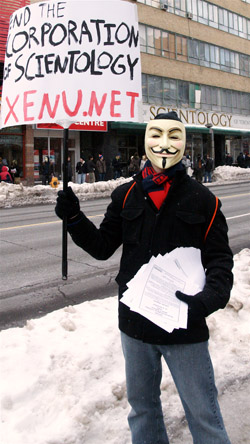 "I stopped picketing because they organized what we called 'The Goon Squad' -- an aggressive group who would surround me, three people deep, to prevent me from flyering," said Haglund.

"But their numbers are dwindling," said Haglund. "There's about fifteen members in their Toronto offices now. In my day, there were thirty in there."

Haglund explains that they don't make enough money to sustain themselves in Toronto by selling a few books and courses. "They get all their money from the States," he says. "Their Buffalo (New York) and Clearwater (Florida) chapters are supporting Toronto."

It's unclear just how many supporters The Church has today. According to Wikipedia, "In 2001, the Canadian national census reported a total of 1,525 Scientologists nationwide."

But what they lack in numbers they make up for in status with celebrities like Tom Cruise, Katie Holmes, Mimi Rogers and John Travolta.

"There are Scientologists who would strap on dynamite to keep Scientology going, just like jihadists," Haglund tells me.

The Church of Scientology was founded in the '50s by science-fiction writer L. Ron Hubbard, author of Dianetics: The Modern Science of Mental Health, which details a "methodology that can help alleviate such things as unwanted sensations and emotions, irrational fears and psychosomatic illnesses." 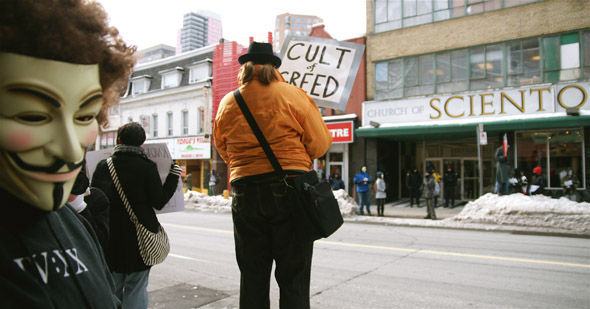 The Church has become an easy target now. And it's not hard to see why.

A video of Tom Cruise, one of its most well-known members, can be seen on a YouTube video smiling goofily and going on about the corpora-- er, religion. Well, at least until it was taken down due to threats by The Church in an apparent attempt to protect their image. 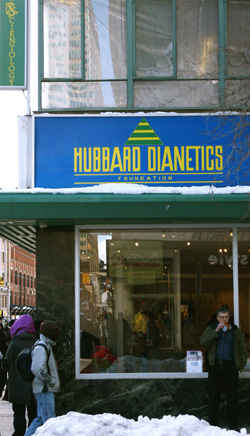 That tactic backfired bigtime. While the video in question was removed from YouTube, it remains viewable at Gawker, where it has become one of their most popular entries.

In the age of YouTube and Facebook, the number of critics of The Church are getting increasingly larger.

"Attacking YouTube was the worst mistake they could've made," said Haglund.

The resulting outcry of censorship from the internet community resulted in a backlash against The Church. Denial of service attacks on their website and purported fax bombing followed, creating a new hate-on for Scientologists everywhere.

While these actions may seem like an easy way of getting back at The Church, it may not be the best course of action.

The Toronto Sun recently reported, "In an interview inside the Church of Scientology's Toronto facility, Rev. Yvette Shank, the president of the church in Canada, called the protesters 'bigots' and said Anonymous is engaging in 'hate mongering' and 'religious hate crimes.'"

The Toronto protest ended without incident at 6 p.m.

As of 11 p.m. Monday night, a trip to www.scientology.com reveals this message:

Meanwhile, The Church doesn't seem deterred. Even though they were previously convicted for breaching the public trust and libel, they continue their mission.

The picketing of The Church goes as far back as 1983 and now shows little sign of slowing. A BBC documentary has recently been made about the cult-like practices of The Church.