Today we're kicking off our announcements of the winners of our just wrapped up Best of Independent Toronto poll. We had 13 nominees in the category of Best Music or Event Promoter; and while it was a tight race, everyone's favourite light saber battling, easter egg hunting, pillow fighting and streetcar partying team of Lori Kufner and Kevin Bracken from Newmindspace claimed the top spot.

With more than 30 events already behind them, Newmindspace is on the bleeding edge of what they refer to as interactive public art, creative cultural interventions and urban bliss dissemination. They've tapped into a generational desire to transform public space into massive urban playgrounds. Since 2005 they've staged events in both Toronto and New York, all while holding down jobs as full time students at the University of Toronto.

Keep reading for my interview with Lori and Kevin to find our more about the team behind Newmindspace.

When did you two meet? When and why did you decide to start Newmindspace together?

Lori and I met on the Queen Streetcar on the way to a rave called Hullabaloo. Hulla is the reason I visited Toronto in the first place in 2003, actually; the first time I ever heard about the city was in reference to a Hulla event. I met Lori on the way to my second Hulla after moving in Toronto.

Lori and I started Newmindspace after realizing we were both into glamourbombing, a sort of faerie culture-inspired practice.

What have been your most and least favourite events you've organized to date?

Our least favourite event was definitely Snow Day 1.0. Not only was it located in a park (we find park-based events to be fairly boring and contrived) but the snowmaker was defective, our friends were cold and miserable, and we got shut down by Toronto Parks, even though Recreation told us we could do it.

Lori's favourite is the Easter Egg Hunt because it is cute and original to prepare, but she really likes the pillow fight and bubble battles too. Kevin's fave is the pillow fight because it has such a low entry level and EVERYBODY can participate. Also, we believe Newmindspace has hosted the largest Internet-promoted pillow fight ever, Pillow Fight NYC 2008.

Where are you from in NY? How do you two manage to still organize events both there and in Toronto?

I was born on Long Island, but moved to Manhattan in 2003, and then to Queens in 2004. I still visit my mom quite a bit, though, so we find ourselves in New York all the time!

Can you describe Metromorphosis? Have many others used your blueprints so far to stage Newmindspace style events in their cities?

Metromorphosis is a guide to starting up a "free event culture" in the city you live in. As far as we know, the guide has been used to start event groups like Newmindspace in over 40 cities in 24 countries. 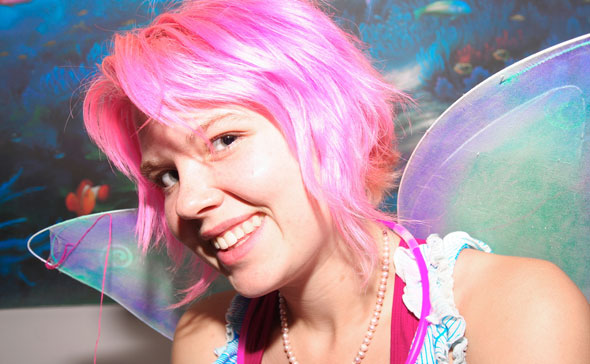 Any events you've heard of in other cities you'd like to see staged in Toronto?

Any interesting and fitting event we have heard of in other cities, we have already replicated in Toronto. People frequently suggest that we emulate Improv Everywhere events, and the people who run Improv Everywhere in NYC are our good personal friends, but we don't really do "pranks," as Charlie Todd calls them. We are always looking for new ideas that can include a large number of people.

Since you're from New York I need to challenge you on something. You know that Toronto bagels are better than New York ones right? Have you tried a Gryfe's bagel yet?

We have had Gryfe's, as well as many other places. We are sorry, but we have to disagree. Most people who have had both seem to believe it has to do with the quality of water: New York's water is softer than Toronto's, meaning it has fewer mineral parts per million, improving the taste of NY's.

Almost all bagels we have had in Toronto and Montreal taste like round bread to us, which is nothing like a bagel should be. Personally I believe it has to do with the distribution of the Jewish population in each city: New York's Jewish population is fairly central in the five boroughs, while Toronto's is concentrated in the suburbs. Even re-heated frozen New York bagels taste better than fresh Toronto ones. Oh well!

What does the future hold for Newmindspace? Any big plans for 2008?

We are going to keep doing what we do best - holding free, fun, all ages events. We also want to expand more into nightlife because the all ages underground nightlife is facing some serious challenges right now (especially venue loss) so we are going to start throwing more "all ages dance music parties" to keep the fun alive while we are not having free outdoor events. Also we are launching a new site called The Urban Playground Movement to help people in other cities start local nodes. 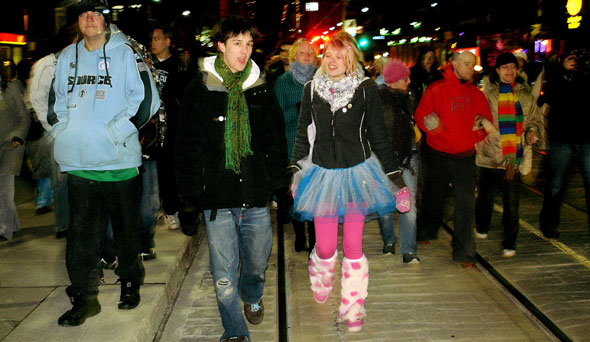 You managed to overcome some pretty stiff competition in this category. Are there any local event or music promoters you two particularly admire?

We never really consider ourselves "competing" with anybody, but in the music category we agree with the weekly magazines that A.D/D is the best music promotion company in the city, and will only get better this Summer. Another crew that we are pretty impressed with are the people who do Drum Circle. Also, we especially admire the work of the Toronto Public Space Committee, who have inspired us greatly. And the independent music promoters who continue to deliver amazing, often free, events, are David and Irving from Promise.

We abhor the word flashmob and encourage event organizers around the world to stop using it. We explain this disdain more fully in a short essay that can be found here. We think the current urban playground movement is only loosely related to flashmobs and will eventually become a feature of all large cities, leaving the embarrassing flashmob legacy behind.