A (Brief) History of Toronto Fires

Photo: Front Street, April 19, 1904. The cleanup begins after the Great Toronto Fire. Courtesy of the Archives of Ontario.

It's been one week to the day since the awful fire on Queen Street obliterated a block of historic buildings, consuming businesses and apartments and displacing dozens. A good chance to remember how the people affected by the fire are still struggling to rebuild their lives. It's also an opportunity to consider that, although tragic, last Wednesday's fire is just the latest entry on a long butcher's bill of catastrophic Toronto infernos. Fires have left a searing brand on the face of our city, changing the geography of our streets, our laws, the way we get around, and even the outcome of wars.

Here, then, is a short list of some of Toronto's more spectacular blazes, after the jump. 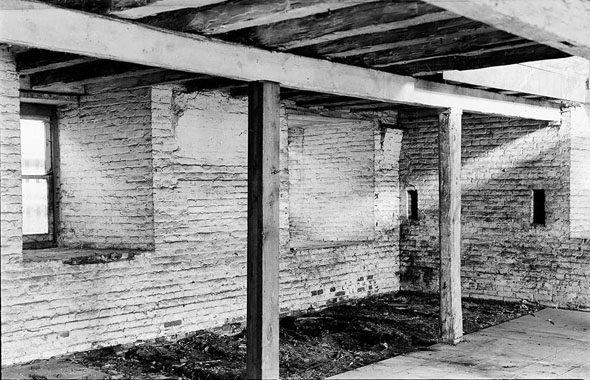 Photo: Fort York's rebuilt powder magazine, circa 1933. Picture this full of gunpowder. Then picture it blowing up. Courtesy of the City of Toronto Archives.

Toronto was barely a city- in fact, wasn't even called Toronto yet- when fire first came to town in a big way. In 1813, Great Britain and the United States were fighting it out in the by-then inaccurately named War of 1812. The Town of York (Toronto v1.0) was an important port and military supply centre for the British forces. Not surprisingly, the Americans really wanted to capture it.

On the morning of April 27, a large American force landed to the west of York and began to advance into the town. British forces were unorganized and outnumbered, and were quickly overrun. The commanding British General, Roger Hale Sheaffe quickly realized the town was lost, and ordered his troops to retreat. On their way out, they rigged the gunpowder magazine at Fort York to explode. And so it did, killing or wounding at least 100 soldiers on both sides, including American Brigadier General Zebulon Pike (Best. Name. Ever.). The explosion was apparently so powerful it could be heard in Niagara-on-the-Lake.

After the battle, American soldiers looted and burned much of York, including the new Parliament buildings erected to house the government of Upper Canada. But not to worry- we got our own back when, just 16 months later, British and Canadian troops burned down the White House. Aw, snap!

The Battle of York was a key motivator in the decision to place the capital of Canada in Ottawa, then a festering logging camp in the middle of the woods. And 150 years later, very little has changed. However, Ottawa had one clear advantage over Toronto- it was far, far away from those pesky pyromaniac Americans. 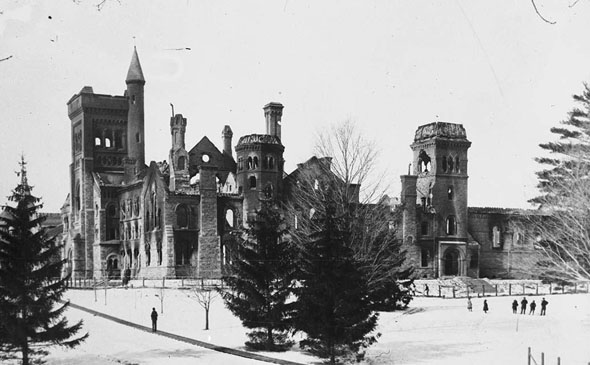 Photo: University College after the Valentine's Day fire, 1890. Courtesy of the City of Toronto Archives.

Some fires take lives, and some destroy property. But some do an altogether different kind of damage- they burn symbols. In 1890, University College was a Toronto landmark, a sprawling exemplar of the city's bright future as a centre for learning and industry. And then, it burned down. Well, the south and east wings, anyways. The library, containing some 30,000 books, was also destroyed.

But true to that never-say-die spirit that allows Toronto to survive winter every year, the university decided to rebuild UC to its former glory, although presumably with a little more stone and a little less wood. Today, University College is the centrepiece of the University of Toronto's St. George Campus, watching over one of the world's largest and best higher education institutions. Not a bad recovery, all things considered. 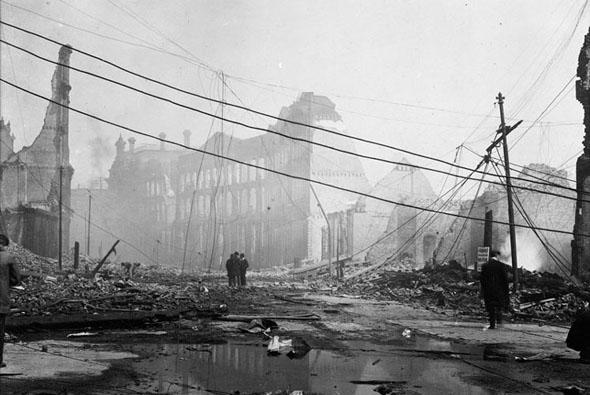 Photo: The aftermath of the Great Fire. Looking east down Front Street from Bay. Courtesy of the City of Toronto Archives.

To be considered a 'great' city, you need to have a 'great' fire. London had a particularly memorable one. Chicago's was so great, they wrote a song about it. Large portions of both New York and Boston also burned, forever revealing the folly of putting very old wooden buildings very close together. A 'great' fire is also a set-up for a very bad joke. It usually involves some poor schmuck viewing the remains of his home and asking, "Oh yeah? What was so great about it?"

In 1904, Toronto finally got its kick at the can. At about 8:04PM on April 19, an alert policeman noticed flames shooting out of 58 Wellington Street West near Bay. By 9:00PM, the fire had spread to its neighbours, and every firefighter in the city was mustered into action. The fire's northward advance was stopped at Melinda Street, but the fire continued to spread south, east and west (go here to watch a nifty animation of the fire's path). At 11:00PM, the fire reached Front Street and began to engulf the Esplanade. The Mayor of Toronto, Thomas Urqhart, put out a desperate call to nearby cities for help fighting the blaze.

And help he got. Men and equipment arrived from Toronto's suburbs, and a special express train brought additional firefighters from Hamilton and Buffalo. Oh, those Americans. First they want to burn the place down, and now they want to put it out. But thanks to the influx of fresh manpower, a final, successful stand was made on Yonge Street. By 4:30AM, the fire was mostly under control, although the wreckage continued to smoulder for weeks.

No one really knows what started the fire. And miraculously, no one was killed. But the damage was massive. A huge segment of Toronto's industrial and business core had burned, some 104 buildings in all. Everything from Melinda Street in the north to the lakeshore in the south, and between York and Yonge streets, was destroyed or severely damaged. Around 5,000 of Toronto's 200,000 inhabitants were put out of work, and the total cost of the damages were nearly a quarter of a billion bucks in 2008 dollars. Nevertheless, Torontonians somehow managed to put it all back together again. 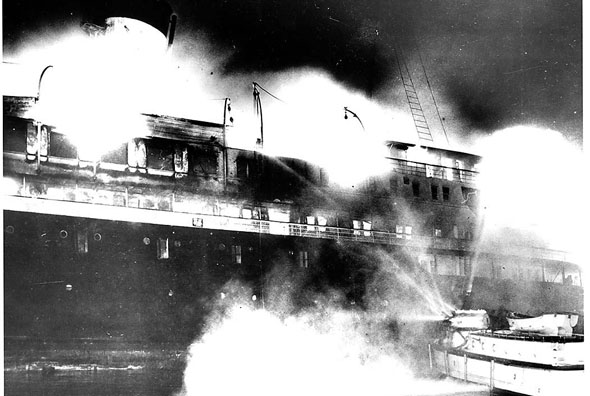 Photo: The Noronic burns at Pier 9, September 17, 1949. Courtesy of the City of Toronto Archives.

In terms of loss of life, the burning of the S.S. Noronic is easily one of the worst disasters to ever hit Toronto. The Noronic, a passenger ship owned by Canada Steamship Lines, arrived in Toronto on September 16, 1949 with 524 passengers and 171 crew members aboard for a seven-day pleasure cruise. The ship berthed at Pier 9 (near the current Ferry Docks) and prepared to spend the night.

At 2:30AM, a passenger noticed smoke pouring out of a locked linen closet. Crew members opened the closet to investigate, inadvertently creating a backdraft and releasing the flames into the ship's passageways. From a fire saftey perspective, Noronic was a nightmare. Its passages were covered in wood panels polished with oil- a fire's wet dream. The ship only had two gangplanks, making escape extremely difficult. To make matters worse, none of the ship's fire hoses were operational on the night of the fire.

By 2:41AM, Toronto firefighters were on the scene. By this time, most of the ship was on fire. Rescue personnel and some crewmembers attempted to rescue as many passengers as they could. Many had to be lowered from upper decks on ropes, while others had no choice but to jump to safety.

The fire was mostly out at 5:30AM. The aftermath was grisly. The exact number of fatalities has never been precisely determined, but between 118 and 139 people lost their lives on the Noronic. Some died of suffocation, others of burns. Several people were trampled in the rush to escape the burning ship, while others died after jumping onto the dock or into the harbour. In the days after the disaster, the public was outraged to learn that not a single crew member perished in the fire.

The burning of the Noronic was the beginning of the end of passenger traffic on the Great Lakes. In response to the fire, new, more stringent saftey regulations were brought into effect. This forced many older boats off the lakes, and made operating the newer ones much more expnesive. Less than two years after the Noronic, Canada Steamship Lines ended their passenger services altogether.

Today, the only memorial to the Noronic victims is a single brass plaque near the Ferry Docks. Hard to believe so many people died in a spot so many of us pass every day.

So there you have it. Fire is a big part of our history, and it will probably always be with us. But it's a credit to the skill of our firefighters and our ability to learn lessons from the past that the Queen Street fire didn't turn out worse. Nobody died, and, while serious, the damage was confined to a relatively small area. And if the history of Toronto fires teaches nothing else, it's that the people of our city will always, always rebuild.