The Junction: Home to The Gathering Space

Meet Loree Lawrence, community artist, educator and founder of a growing arts initiative called
The Gathering Space. Before November, Loree could be found scouring the Junction with other artists, snapping photos of its undiscovered niches, and collecting stories from the locals. Their objective: to use text, images, maps and visual art to create dialogue about life in the Junction.

What began as a mobile arts project has developed into a full-fledged community studio, now operating out of a local coffee gem on Dundas West, Cool Hand of a Girl. The Gathering Space is bursting with creative activity. There is so much going on, I'll let Loree bring you up to speed.

Read on for my Q & A with Loree

Can you describe some of the projects/events/activities the space has on the go?

Over the next few months we're holding regular Homemade Movie Nights where people can bring in their old home movies to watch together over popcorn and beer. The next one is on January 31st.

We've also begun work on our "Home Sweet Home" installation and performance event in April. Right now it involves residents embroidering "home sweet home," meaningful sayings, lyrics from songs, or lines from poems on fabric. Next, we'll invite local artists and residents to create work using different media in response to the theme. These will be installed around the neighbourhood in time for April 14th, the anniversary of the Junction's amalgamation with the City of Toronto.

Next month we're focusing on the history of the Junction. We'll feature an interactive historical photo exhibit, a forum on the development of the neighbourhood, and begin our collection of oral histories for installation in different venues in the Junction. 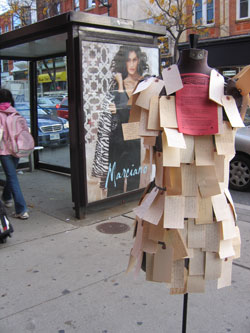 What inspired you to create The Gathering Space project?

The Gathering Space was inspired by the work of Ruth Ben-Tovim and Trish O'Shea of ENCOUNTERS in Sheffield, England, who I met in 2003 at a conference. For the last five years, they have been running projects in disused shops and mobile trailers in Sheffield and Liverpool and using them as a base to create artworks around the themes of people, community, identity, and place.

I've been doing community-based art projects for years in various neigbourhoods including Kensington Market, Islington/Mabelle in Etobicoke, and the Downtown Eastside in Vancouver, but I've never worked in a place that is connected to my personal history. The combination of working out of a storefront/studio in a place that has personal meaning for me, working on installation and performance projects with people from the neighbourhood, and being able to develop something with them at a time when the Junction is undergoing enormous change presents an incredible opportunity for me as well as a huge challenge.

What's your relationship to the Junction?

My mother's family were long-time Junction residents, stretching back to my great-grandparents who moved there in the early 1900s.

As a child I was fascinated by the stories I was told about my mother's life there: the Stock Yards, the railway, and the bustle of the Junction in the early days. In the sixties, when I first visited, I also remember hearing about the increasing poverty and poisonous land. The contrasts captivated my little mind in a way that made me curious to know more about the dynamics of the neighbourhood. 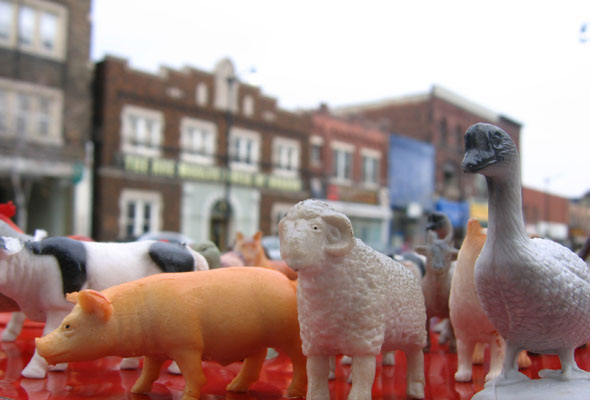 It was Toronto Life Magazine that first touted the Junction as being the next "hot" neighbourhood in Toronto. How do you feel about this statement, and how has this buzz affected the local arts community, or the community at whole?

The gentrification of the neighbourhood is going to have all sorts of welcome and unwelcome effects on the current social and architectural landscape. And, of course, being a "hot" neighbourhood in Toronto is a death knell for artists' communities living in rented live/work studios.

On the other hand, The Junction Arts Festival is thriving (it will span two weekends this year) and 2008 is the Junction's Centennial Celebration (it amalgamated with the City of Toronto in 1908), so there's quite a big buzz in the neighbourhood about these cultural events.

Now is the time for the community to make a concerted effort to organize itself in preparation for the kind of high-rise development that is happening along Queen Street West. I'm hoping that we can catalyze some discussions through The Gathering Space. 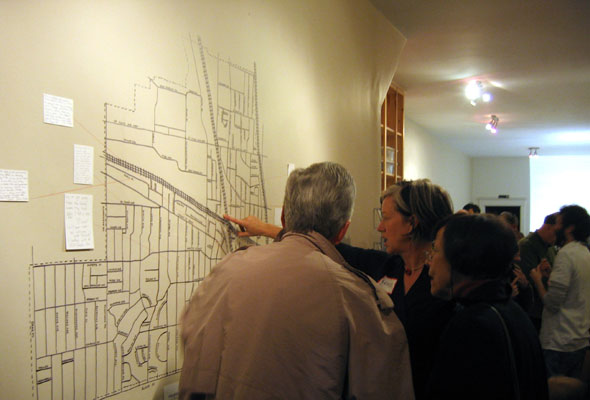 How has The Gathering Space developed since moving to your home base at Cool Hand of a Girl?

In September and October we operated out of a bicycle trailer along Dundas Street West. We'd open it up and pull out our "research" tools and spend the day talking to people and inviting them to engage in our activities.

In November when the cold set in, we managed to find a home at Cool Hand of Girl. Since moving there, we've been able to keep regular studio hours, run workshops, and hold monthly special events. People are beginning to recognize The Gathering Space as an emerging community studio and gallery that invites their input. I miss being out on the street though so we're planning to get out on weekends again soon. 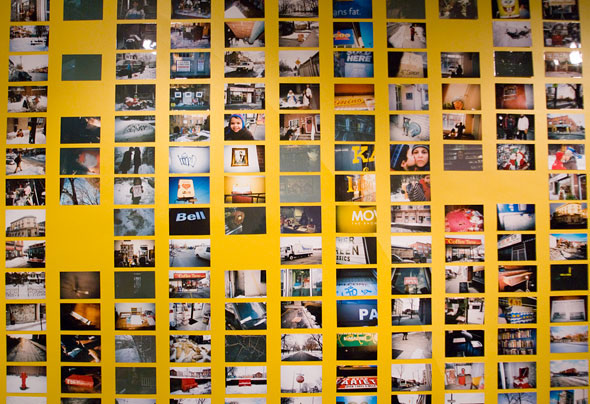 Any plans for the Junction Arts Festival 2008?

There's a lot we want to do. Maybe we'll do something in peoples' homes. I think it'll involve a couch or two.

All photos courtesy of The Gathering Space
Except last photo, courtesy of Joseph Michael Howarth