The Force Was With Them - Maybe Too Much Force

It wasn't a publicity stunt for a new exhibit at the Royal Ontario Museum (ROM). Star Wars, not dinosaurs, brought over 2,000 people together in front of the ROM on Bloor Street last night in a giant Lightsaber Battle.

The biggest battle for most was at the start of the event, attempting to obtain one of the 1,600 blacklight-reactive, meter-long cardboard tubes that NewMindSpace -- the organizers of this endeavour -- created for the event.

Six large, black-light cannons were situated in the middle of the crowd, aimed at lighting up the hand-painted tubes. After a few swordfights, a light sabre mosh pit emerged and people went a bit nuts. Arm kids with hand-painted pieces of cardboard and tell them they're acting out Star Wars and they'll have a tendency to go a little ballistic.

Continue reading for more stories of mayhem and a mini photo slideshow.... 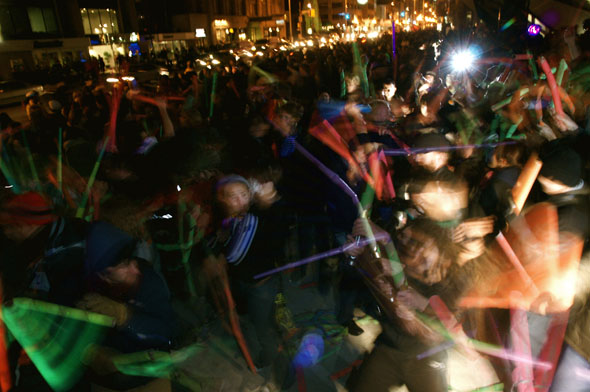 There was plenty of force present indeed, including the police force. Among them, three officers on horseback. But there were no major incidents. A feat in itself, considering the massive turnout.

Most heard of the event through their Facebook event, but others, like 46-year old Harold Connell, a.k.a. "Chil" -- who was dressed as a Klingon Jedi for the event -- got the word from TCON, a science fiction promotional society website.

Some brought their own, store-bought lightsabers and held their own battles with others of the same ilk. Sid, who also likes to dress up in characters such as Jayne from Firefly and Snake-Eyes from G.I. Joe, drove in all the way from Kitchener, Ont. for the event. 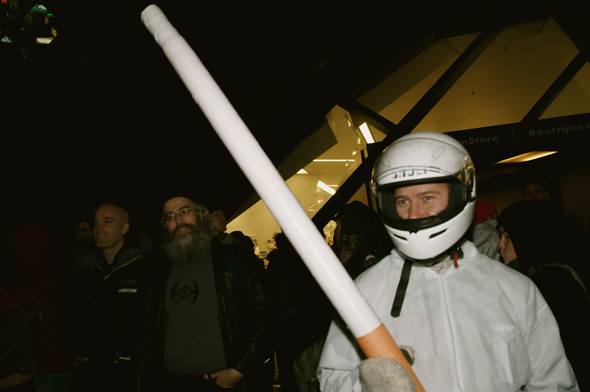 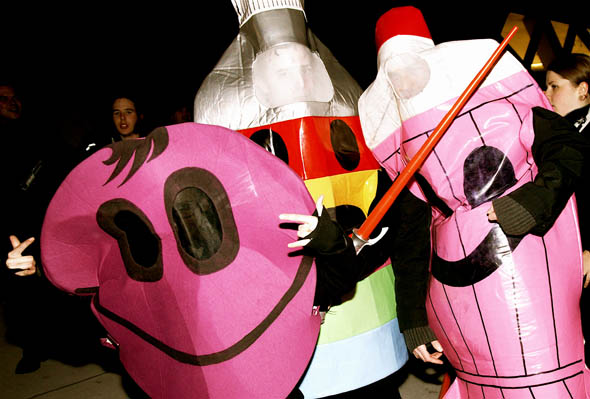 The crowd finally dispersed around 11 p.m. Those with enough energy after all the moshing and swordfights continued partying with the happy mascots at the weekly Randomland night at Circa club.

What's next? The Newmindspace duo, Kevin Bracken and Lori Kufner, have their sights set on another Lightsaber Battle in the spring, but with better light sabres and hopefully better methods for their distribution.

More photos in a mini photo slideshow below:

UPDATE: Check out this video of the mayhem:

Link to original video by user "perky" on Liveleak