Monday night in Toronto saw a veritable who's who of the land development industry come together at the Palais Royale for the 2007 Toronto Urban Design Awards. Planners, builders, and architects! Oh My! The night began with opening remarks from Mayor David Miller, who emphasized that, all evidence to the contrary, Toronto's urban design industry is one of the strongest in North America. A casual observer in Toronto might have reason to be skeptical of this claim

Award categories were very diverse, and included "elements" (portions of a building or landscaping of particular merit), "Buildings in Context - Private: low-scale, mid-rise and tall", "Buildings in Context - Public", "Small Open Space", "Large Places or Neighbourhood Design", "Visions and Master Plans", and "Student Projects". In a change from last year, as evidenced by the category titles, emphasis was placed more on the interaction of the project within the context of its setting. The difference between urban design and architectural design. All told, twenty-four projects took home awards or honourable mentions.

The Jury was comprised of John Barber of the Globe and Mail, Calvin Brook of Brook McIlroy/Pace Architects, Renee Daoust of Daoust Lestage (Montreal), Eric Haldenby of the University of Waterloo School of Architecture, and David Leinster of The Planning Partnership.

Who were the winners? Keep reading to find out.

The projects that caught my eye, however, were the smaller projects that many people likely haven't heard of. The Hunter Residence at 54 Wells Street (Ted Watson) won the award of excellence in the Elements category for the floor-to-ceiling sliding door that looks onto a public street. The feature suggests a lot about the owners' sense of public and private space to integrate such a bold feature into their house. The Leonard Avenue Pre-Fab Rooftop Apartments at 25 Leonard Avenue (Levitt Goodman Architects) is a rare example of increasing density and residential units to an existing building without removing the original structure. How many buildings in the city could make use of this kind of "low-impact intensification", I have no idea, but it certainly opens up new possibilities for additional lower-cost housing options in already intensified neighbourhoods. The Active 18 neighbourhood design for the Queen West Triangle (also by Levitt Goodman Architects, in significant consultation with the community) received an honourable mention for Vision and Master Plans. This community-developed proposal was put forward as an alternative to the developer-proposed designs for the area. Though ultimately unsuccessful in getting support from the development community and the Ontario Municipal Board, the determination and co-ordination of the effort certainly gives new spirit to participatory planning.

If the award winners and honourable mentions are any indication of the state of urban design in Toronto, things are certainly looking up for a city better known for the colour "greige" (kinda grey, kinda beige).

For a complete list of winners, read the Jury Report on the City of Toronto's award site. 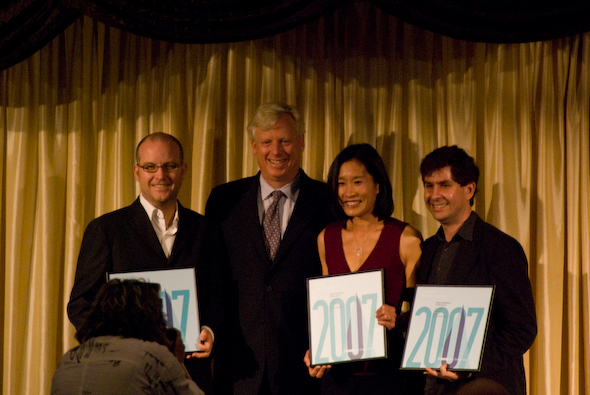