Just Don't Breathe and Everything Will Be Fine

If you're in the area of Victoria Park and Danforth right now, you might want to close your windows and not breathe.

680 News is reporting that there was an explosion and fire at an auto wrecker yard around 2pm and that a car burst into flames. I read elsewhere that it is a 2 alarm fire with crews on-scene. From my vantage point, however, it doesn't look as big as the huge plume of smoke suggests!

3pm: The fire has been upgraded to a 5-alarm blaze. Evacuations of homes and businesses in the area are underway, the TTC is diverting route 20 and route 113 buses, and GO train service on the Lakeshore East line has been shut down.

11pm: The good news is that all transit is back to normal. The really bad news is that authorities are saying that the blaze may have been deliberately set. 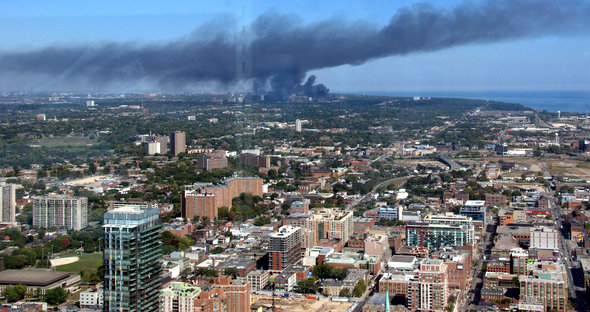