As I stood in the rain during the memorial celebration for Ed Mirvish, a kind woman standing next to me adjusted her umbrella to cover the long lens of my camera. There was an immediate sense of warmness about her as we exchanged small talk during the performances. After the gospel singers finished their performance, we decided to escape the rain and get a coffee at a nearby corner restaurant.

Lori's first love was Craig Russell and although he never made a secret of his homosexuality, they were married in 1982. He was a female impersonator during the 1970s and 1980s, and Lori was his biggest fan. Craig became famous after his starring role in the Canadian feature film Outrgaeous! (1977). He portrayed a gay hairdresser who wanted to be drag queen, and it was one of the first North American films with a gay theme to receive widespread distribution.

His impersonations included Carol Channing, Bette Davis, Mae West, Barbara Streisand, Tallulah Bankhead, Marlene Dietrich, Bette Midler, Anita Bryant, Peggy Lee and Judy Garland. Unlike most drag queens today, he spoke and sang with his own voice and was able to sing a broad range of octaves. As a teenager, Russell became president of Mae West's fan club, and briefly worked and lived in Los Angeles as West's secretary. He eventually returned to Toronto and worked as a hairdresser while pursuing his career as a stage performer. By 1971, he was a regular performer in Toronto gay clubs and had a widespread international following.

Lori shared Craig's life for eight years, as his wife. She also shared his battle with AIDS. Craig died of an AIDS-related stoke on October 30, 1990. She kept diaries of their time together and has started writing a book.

Lori is 49 years old and has her own battle to overcome. She has been diagnosed with a form of skin cancer called multiple melanoma. It is spreading throughout her body, legs, arms, torso and lungs. A year ago she was given five years to live, but she chooses to believe the psychic who told her she will live until the ripe old age of 94. She has completed two treatments in Buffalo at the Roswell Park Cancer Institute and has two more sessions planned.

She worshipped the sun for many years and is still fond of the smell of coconut. It reminds her of the tanning oil she used while sunbathing. While sharing our coffee, she pointed to a dark piece of wood on the restaurant table and explained that her skin used to be the same colour. Ignoring the initial mole she found on her leg was, in hindsight, a mistake.

She had worked as a dresser for the Mirvish family for several years but is currently unable to work.

I met up with Lori again at the Busker Festival for breakfast. She was wearing a hat for sun protection and holding a cane for support. The sun was strong, so we made our way into the 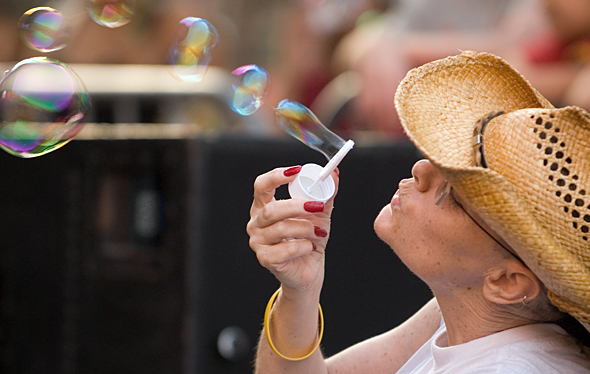 St. Lawrence Flea Market. She has a good eye for quality items and purchased an old pine box to use as a coffee table. I picked up a silk umbrella from the 1930's with a silver plated handle and admired it. She took out her wallet and purchased it for me as gift. We shared a cab ride to Bloor street with our purchases and I couldn't help but think of the irony that we had met under an umbrella in the rain and now I have a beautiful umbrella as a reminder of our friendship.