So today didn't exactly start off pretty enough to entice you to head to Front and Church, but the weather's starting to brighten up and Sunday is primed to be a pleasant 17-25 degrees. Perfect weather to check out some trampoline acrobatics and maybe a flame tossing trio of barbarian women.

Be sure to bring some cash, though. The vast majority of the performers and vendors are showcasing what they do for a living, not what they're doing as a simple side project to pass the time. Some highlights, tips on how to fully enjoy it, and other deets about the 2007 Toronto Buskerfest happening on Front Street await you after the jump. 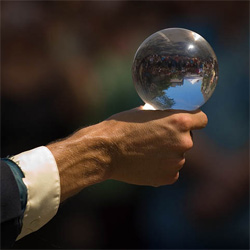 BlogTOers were in attendance yesterday to check out the many sights and sounds that were hamming it up for the crowds. I gotta say that I was expecting my first Buskerfest to be a lot different than it is. Maybe I'm just a picky bastard but there was a lot less of what I consider to be the good stuff.

Now, If you're in the market for some bead necklaces, some ostrich earrings, or even some Hello Kitty crap then you're in luck; there's a crapload of product vendors on hand selling their wares. I understand that vendors are merely showcasing their trade just like a knife swallower shows off his or her talent, but when I hear the word busker I think of the dreadlocked guitarist who plays outside the church in The Beaches more than anything else.

Not freaking Hello Kitty, that's for sure.

But amidst the sometimes overwhelming amount of stationary vendors some really cool performers set up shop and did some crazy things. Around 3pm I caught a Quebec/France trampoline troupe doing all sorts of crazy flips, flops, and mid air high jinks. Known as Ketchoz Clan, the group of two guys and a girl (along with her adorable 5 year old son who took part in the fun) had a full on act that didn't just consist of stale trampoline acrobatics but also a bit of a comedy act that was being played out through the 45 minute-ish show. Some impressive magician-esque antics were also thrown in for good measure, but I'll try not to spoil it as they may still be performing today and/or tomorrow. 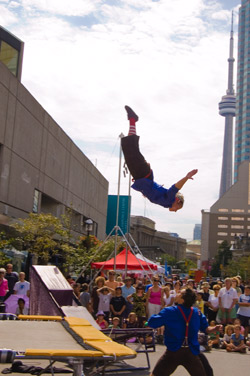 Later in the day saw the 2006 People's Choice Award winner Alakazam (all the way from Australia) juggling his knives for a surprisingly dense crowd; I see some guy 30 feet in the air spinning a huge blade in his mouth while juggling a bunch of others, and I run for the hills.

Other standouts included The Yo-Yo People, a husband and wife combo who spring 20 hula hoops while spinning yo-yos on unicycles (note: yo-yos are not nearly as sharp as Alakazam's massive blades), the freaky guy who walks on 4 stilts, looks positively demonic (and makes the cutest little chirp sounds. The nightmares I had kept me from getting a decent night's sleep), as well as the flame wielding weirdos known as Les Walkyries; these three flame tossers from Montreal put on a full theatrical performance while wielding 20 foot long whips and spinning fireballs on devil sticks and strings.

And someone is selling Voodoo Baby dolls for $6 a pop. I doubt they're the guys who made them themselves, but that's a damn good deal!

To enjoy Buskerfest to its fullest, though, here are a few tips: 1, disregard the ubiquitous presence of the many Scotiabank signs. They sponsored the event, and yeah they're collecting money for Epilepsy Toronto, but the amount of signage can easily detract from what would otherwise be a grassroots-lookin' event, which is half the charm.

2, do not, I REPEAT DO NOT walk into the middle of the performers main area to take pictures less than a foot away from their face. You aren't part of the performance and it easily distracts and potentially ruins the show for others. Further, Captain Obvious states that repeatedly photographing other people's children who are just sitting watching the the show is fucking creepy. If you like'em so much, go have some of your own.

3, bring some money to give to the performers who truly entertain you. Some of them have traveled from half way across the world to showcase their talents for our benefit. This isn't a ticketed event and the entertainers aren't exactly raking it in otherwise. They do it because they love to entertain, so a few dollars goes a long way to ensure they continue to bring smiles to our faces.

You have today and tomorrow to enjoy the shows, which run until 11pm tonight, and from 11am to 8pm tomorrow. It isn't often you can find a magician, flame-breather and a didjeridu player who incorporates guitar stomp boxes into his show all within a 3 block pedestrian only area!