TO to MTL: The Porter Experience

I make a habit out of making a trip out to Montreal just about every year as time permits. Up until this year I've always made my way out there using VIA Rail. But now with new kids Porter Airlines on the scene, offering a flight to Montreal for a scant few more dollars than taking the train (not to mention saving nearly four hours of transit time - Porter takes about an hour), it's now a tempting alternative.

Granted, it's not the cheapest option for traveling, and its long-term viability has been called into question on a number of occasions, but I figured it worth it just for the experience alone. As it turns out, not only was it a totally painless way to travel, but pleasant even. Who knew air travel could be enjoyable?

Porter offers about six flights to and from Montreal a day. Since this would be a four day weekend for me (score!) and to maximize my vacation time, I chose the earliest possible time, a 8:55 flight. Arriving at the Porter terminal area at the south end of Bathurst, I took what was quite possibly the shortest ferry ride in the world at the Western Gap dock.

It's absurd, really; The ferry is maybe a 500 metre run through the water and one can't help but wonder about the enormous waste of resources and time that this method takes compared to that of a light bridge. (even if just an enclosed pedestrian bridge for passengers to make their way across).

Aside from the absurdity of the ferry, location is one of the key advantages that Porter has over the competition. Not only is the Island Airport extremely easy to get to, but it makes getting in and out of the city an entirely trivial matter. Porter runs a shuttle bus to and from Union Station, so passengers are easily connected to the rest of the city's transit services. 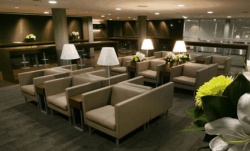 Once on the Island, along with a few dozen other passengers, it was through security and baggage checking. Security is on par with that at Pearson International, but it takes a fraction of the time to get through thanks to a large part to the Porter staff and security. Not only were they highly professional, but, more importantly, they were all very courteous. The same nonsensical, completely idiotic and reactionary anti-liquid rules applied, but passengers were less affronted about it than I've seen at Pearson because of how they were treated. Customer service - imagine that!

After having made it through security, I made it into the much lauded Porter Lounge. Here's where they started to really impress. Comfortable leather chairs were plentiful inside the clean, minimalistic-styled lounge. Here, they offered complimentary (and constantly re-stocked by a dedicated staffer) coffee, bottled water, and munchies like biscotti and cookies. I'm told the place also offered free WiFi, but barely had the chance to down my lattĂŠ before they began boarding the plane.

Once aboard the small Bombardier Q400, it wasn't long before we were in the air. The view of the Toronto skyline from this perspective was interesting; Something you'd never see unless aboard a chartered heli tour. Leg room inside the plane was really impressive. I'm a pretty tall guy, and have had my fair share of knee-crunching experiences on Air Transat and some of the other cheaper airlines. I easily had about 3-4 inches of room in front of my legs on this flight, though. 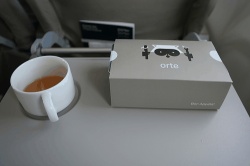 For a flight that lasts a scant more than an hour, I was pleasantly surprised to see the flight attendants come around to not only offer complimentary drinks, but also a small meal. Inside the cleverly designed and consistently branded box was a cheese sandwich and fruit cup. Yummy!

Speaking of branding, everything Porter from luggage tags to bottled water sports the cute looking raccoon motif. (care of design agency, Winkreative) Friends I was traveling with remarked how appealing the whole experience felt from check-in to touchdown, but I couldn't help but think that using an animal that is predominantly known as a scavenger is a little questionable. Who knows though, maybe they're trying to position themselves as a necessary nuisance of the contemporary urban lifestyle.

Before I knew it, the pilot came on the PA to announce that we had started our descent to the Montreal city centre. A few minutes later around 10am, we were on the tarmac, and awaiting our bags at the carousel. The advantages of travelling in these small planes are two-fold; First, it takes nearly no time to disembark a plan with only 70-80 passengers. Also, if you checked a bag, the wait at the luggage carousel was fairly minimal, especially considering that maybe only around 3/4 of the passengers chose to check a bag to begin with.

After arriving at Pierre-Elliott Trudeau International Airport in Montreal, you can catch a cab to downtown Montreal for a maximum flat rate of $35 that will take 15-20 minutes.

Overall, it was a completely painless and smooth traveling experience. I say painless in the most endearing way, as I don't think I've ever come off a plane feeling at or near the same energy level that I had when I went aboard. It was certainly preferable to the stop-and-go traffic I would have faced had I chosen to take the 401, or the claustrophobic Via rail economy ride.

There's some tips that I can offer that will make your flight even better (and potentially quicker):

The big question now is sustainability. Can Porter stay afloat among harsh criticism from city council, waterfront revitalization plans, and the persistent, yet undeniable complaints from Island residents?

There's talk that the airline will soon offer flights to New York and other major US destinations. Porter boldly proclaims that they want "to become North America's premium short-haul carrier." I for one would love to see this happen, seeing how well my experience with them went.