On This Spot: Yonge and Eglinton

Yonge and Eglinton is lovingly known as "Yonge and Eligible" and "Yonge and Eg." It's one of Toronto's booming areas, littered with stores, condos, entertainment and young professionals. The area is known for it's large subway station, major banks, restaurants and numerous stores. Of course, it wasn't always this way. Prior to the subway arriving in 1954, Yonge and Eglinton was a primarily residential area.

The first phase of the Canada Square Complex opened over the subway in 1962, and the Yonge Eglinton Centre opened in 1974. Prior to these massive buildings opening, the intersection was lined with mostly small shops and residential homes. 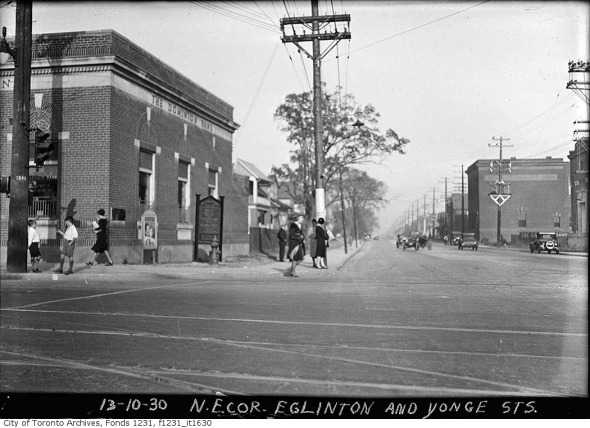 On the northeast corner, where a TD Canada Trust now stands, was a Dominion Bank building. Much like at Bay and Bloor, the building itself is completely different, though TD Canada Trust is the current incarnation of the Dominion Bank. Across the street, on the southeast corner, sat several small homes. At least one of these homes was converted into shops. The one closest to Eglinton sold cigarettes, cigars and tobacco. The area where Canada Square now stands was also lined with homes. Just east of Yonge sat the York Masonic Temple. Streetcar tracks lined both streets. 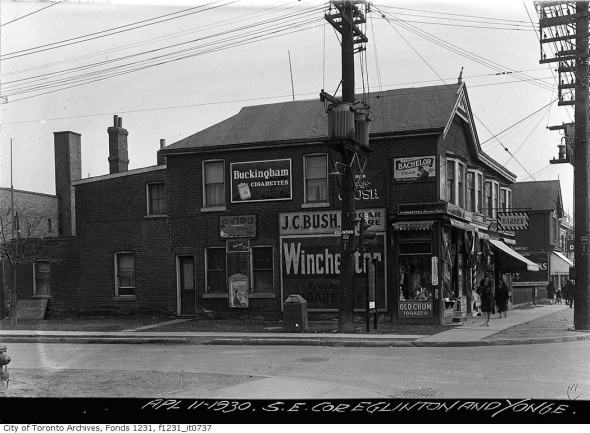 It was the streetcar that first brought large numbers of people into the area, and decades later the subway did the same on a larger scale. Eglinton Station was the northern-most station on the Yonge subway line until 1973.

The history of Yonge and Eglinton goes even further back, back into the 19th century. In 1837 a confrontation at Montgomery's Tavern (located just north of Yonge and Eglinton) turned into one of the central moments of the Upper Canada Rebellion. Canada Post's Postal Station K now stands on the site of the tavern.