On This Spot: Bay and Bloor

Bay and Bloor is one of the most well known intersections in the city. It's where big banks meet upscale shopping. Today the area is filled with Birks, Davids, Holt Renfrew, Indigo, Chanel, and other giants of Canadian and international retail. It's home to the Manulife Centre and steps from several major subway stations. But it wasn't always this way.

In the early part of the 20th century this area was lined with several residential houses. Construction of new streetcar tracks began in the mid-20s. By the end of the decade numerous stores were beginning to line the streets, an early indication of what the intersection would become. 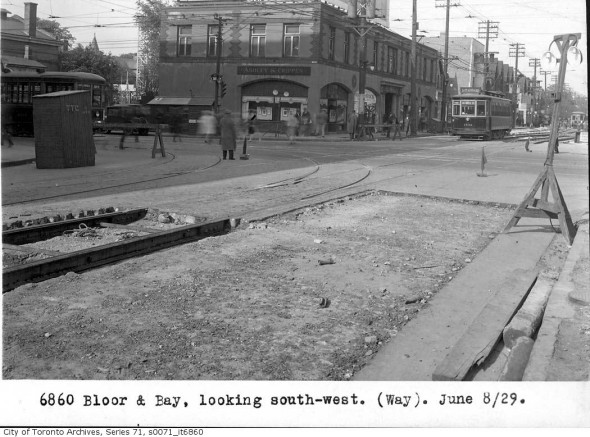 In 1926 Ashley & Crippen, a photography studio still in business to this day, occupied the southwest corner. The Bank of Toronto moved into that building around 1929. The Bank of Toronto went on to merge with the Dominion Bank in 1955, becoming the Toronto-Dominion Bank. Today that bank's largest division, TD Canada Trust, still occupies the corner. The old building was torn down to make way for a 21-story office building that was completed in 1969. 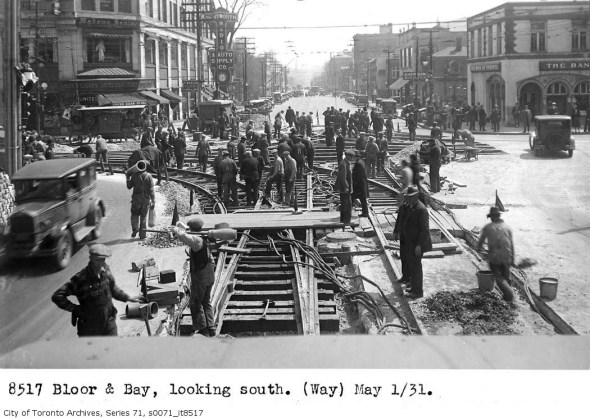 Across the street, on the northwest corner, sat a drug store. The southeast corner was home to a United Cigar Store and the Wentworth Radio and Auto Supply Company. Today the Manulife Centre stands on that spot. Bay Bloor Radio began there in 1946. It appears that none of the 1920s-era buildings are still standing.

Plans to revitalize this area call for wider sidewalks, more trees, and less street parking. The plans were originally announced in 2003, re-affirmed in 2006, and are expected to be completed by 2009.