A well-dressed man, whose suit caught my attention from half a block away, introduced himself as Mr. Schwartz. Proud of his youthful appearance, initially he wouldn't reveal his age but instead playfully suggested that I take a guess. I was off by more than a decade - he's a handsome 93 years old.

He and his 88-year old wife (originally from Poland) have been married for 57 years. They have no children because of several complications with the pregnancies. They moved to Toronto in the late 1940's after he was released from Auschwitz. 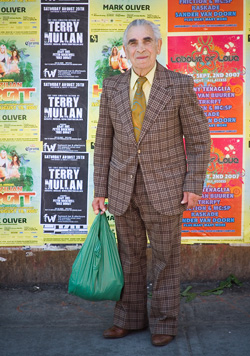 He tried several times to teach me how to say "good morning" in Polish and we shared a laugh at my bad attempts of saying "Dzien dobry".

I asked if he had ever talked about his time in the concentration camp in detail to anyone. He explained that on the few occasions that he had talked about his four and a half years in imprisonment, people usually couldn't believe his stories.

He doesn't like to look at images of Hitler but instead enjoys looking at images of Canadian and American soldiers. He pushed up his sleeve to reveal the permanent reminder of his capture. His diet often consisted of a potato for breakfast and some days it would be the only meal he got and he described how people would remove the potato peelings and give them to those more in need.

There was brief mention that if the guards did not like someone, they would not be seen again.

Mr. Schwartz could tell many stories and I would gladly sit with him for days listening, but he tapped his head and grimaced saying "It makes me crazy to talk about it". We changed the subject and he explained that he was going to have to drive home. Even at his age, his eyes are good and he doesn't wear glasses. 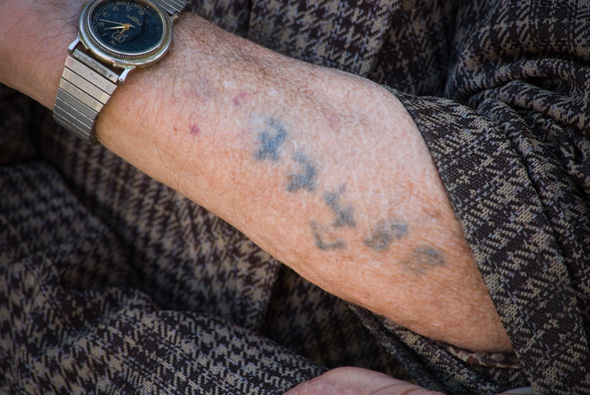