Today (at roughly 4 p.m.) marks the fourth anniversary of the 2003 North American Blackout which brought down power across Southern Ontario and much of the surrounding region.

The causes were numerous and complex, but the underlying issue was how heavily strained the supply of available electricity had become across the region under a heatwave, resulting in a situation where several minor problems coincided during the highest-use time of the day and caused a cascading system collapse.

Although the event is commonly known to most locals simply as "the blackout," the period of Aug 14 to Sept 28, 2003 actually saw six major blackouts occur around the world, with ours coming in second most significant by cutting off power to 50 million people.

The fact that people do refer to the date in this way shows just how significant a memory it left with everyone of those affected. Whether people recall it as a frightening and unpleasant experience, a beautiful and freeing one, or (most likely) some mixture of the two depends on who they are and what position they randomly happened to be in at the time.

Click through for an exploration of the spectrum of experiences, along with news clips from the following day...

"Everything in society we cherish ended when the blackout came," Matthew Simmons, chair of the largest energy investment bank in the world, states in the energy-crisis documentary The End Of Suburbia.

Simmons' interpretation of the Blackout is that it should've been seen as "a fire drill for how important energy actually is ... but people didn't get it." When he says, "I don't think we actually learned a thing from it," it's a warning that still seems to carry the same weight now, years later, with Ontario's record energy-usage highs overshooting our production capacity and inciting pleas for use reduction through the recent heatwave.

The perspective presented by Simmons' statements is one that would feel most at home with those who are closest to and most love the mainstream North American consumer lifestyle and the services and conveniences that come along with it - hardly a small demographic.

The area hit is one of the parts of North America that most widely practices high-tech lifestyles and most heavily depends on immediately-accessible energy and services. As well, though we may not be Las Vegas, we definitely do still have a thriving, electrically-driven nightlife. 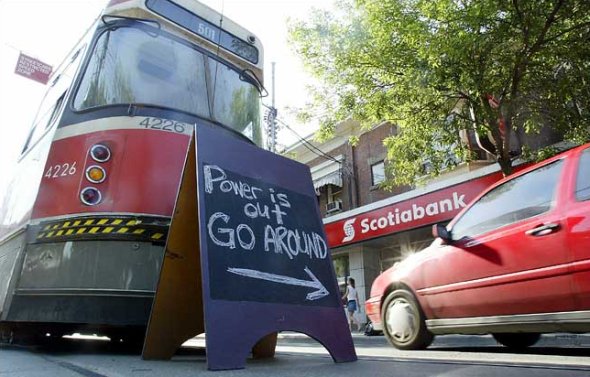 There's no doubt that a huge number of people are able to relate to seeing the Blackout as the most inconvenient of inconveniences imaginable, without actually getting into social collapse, especially if they were stuck in a top-floor apartment during a heatwave without power, elevators or even water.

On the other hand, to some people these allegedly essential "essentials" only really serve to keep the city buzzing along at top speed, and the temporary shutdown allowed for a special type of long weekend experience.

"I had a great time during the blackout. I got to leave work early, walked home, had a BBQ at the neighbours, hung out in our local (candlelit) bar, and saw real moonlight (& Mars!) in the middle of downtown," wrote blogger Margo on Saturday, Aug 15, 2003 - a day after the blackout, and two days after blogging about problems with the power grid and the value of investing in alternative energy. (Good call!)

Something magical and beautiful can be seen in many people's recollections of their experiences during the blackout. It helped many people transcend usual social barriers by breaking down or simply pausing the normal framework of society. It encouraged people to take a step away from rushing from the grocery store to their home to catch a television show and instead engage with their surroundings.

My personal experience was definitely a mixture of the two sides. I was with friends in the waterpark at Wonderland, and it was annoying how we'd been in the wave pool for nearly 45 minutes and no waves had materialized at any point... but the adventure we were thrust into when we realized we were stranded with no means of transportation or communication was far more exciting and memorable than the day at the amusement park had been.

We witnessed people spontaneously directing traffic through intersections around there, something that I've come to realize was pretty widespread. 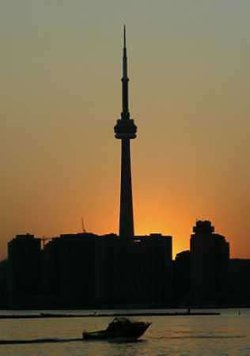 This helpful pitching-in was such a simple act, yet it made me feel so much renewed faith in people not to be either malicious and selfish, nor panicky and helpless. Really, I shouldn't seek reassurance of that, but watching how people behave when the intersection's red lights are working can be pretty disillusioning.

Soon enough, sunset came, seriously and fully committing us to this darkness for the night.

I must admit that trying to heat my dinner (cold but precooked perogies) over a candle was pretty futile and unpleasant, and letting the food in the fridge sit and go bad instead wasn't a reasonable alternative. But the candles me and my friend Dani were using for light and cooking were ones that we hand-rolled in the dark using beeswax and wicks that I'd had forever in the bottom of a drawer and never done anything with.

When we went out for a walk around my neighbourhood we discovered that the residential North York streets that we always complained were so empty and dull had filled up with all the neighbours I'd never spoken to in the 7 years I'd been living there.

We said "hi," smiled, just basically acknowledged each other's existence as we passed, having a sense of shared experience now and quite a strong one at that. Again, sad that this was an unprecedented thing for my street, but that doesn't change the fact that it was.

The Milky Way and all the stars I'd only ever seen hours outside the city were totally visible. We couldn't get in touch with many people we knew at the time, but ran into a few, and when we did hear from others we heard of some great beach and street parties and other spontaneous celebrations of the night.

I'm sure the idyllic time I had couldn't have been shared by everyone, and considering crime happens on the most well-lit of days, it's naive to think this would be an exception.

As Phil from pumpkinpatch.ca says, "Some say there was no crime in Toronto during the blackout. Right. Welcome to my neighbourhood. Adelaide and Sherbourne." (Check out pumpkinpatch.ca's blackout photo gallery for shots of downtown under darkness.)

All the same, many people (the lucky ones) do indeed remember the night as one of mass celebration and little crime or conflict. These folks may only remember people taking advantage of the situation in the strictly entrepreneurial sense, such as these glowstick vendors who appeared on Spadina for the night, prepping partiers for street parties, like this one at Spadina and Queen.

I'll finish by throwing this to you readers: How do you remember the 2003 blackout? What did you experience and witness, and what meaning did that hold for you? And, lastly, what lessons should we still be considering in 2007?