On This Spot: City Hall

With all of the voting and posturing recently, the eyes of Toronto have been turned towards City Hall. We all know by now that spending cuts are in order and that the city could end up bankrupt. Which is why it's nice to go back to a time when the city had some money, and actually spent it.

In 1956 Mayor Nathan Phillips called for an international competition to find a design for the new Toronto City Hall. The budget for the building was $18 million and the building was opened in 1965.

Bay Street from Queen to Dundas was once Toronto's Chinatown. All businesses in the area were forced to close down and move in order to build the new City Hall. Most of these relocated to Dundas and Spadina. The northwest corner of Queen and Bay was also home to Manning Chambers that housed various city offices when Old City Hall became too crowded. 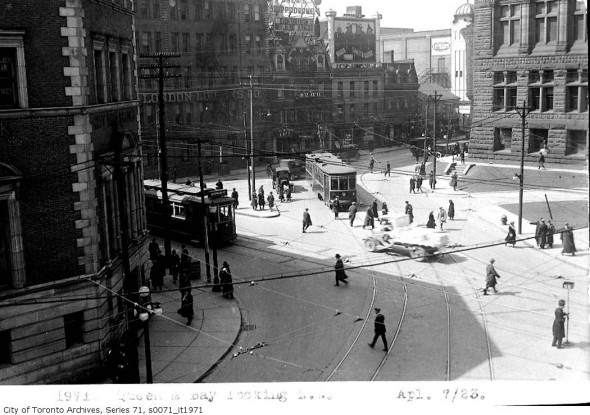 The area where City Hall now stands had been through many changes prior to 1965. In the 1920s the London Life Insurance Company sat on that corner. Looking south you would see a series of restaurants, barbershops, and stores. By the time City Hall was built many of these buildings had become parking lots. 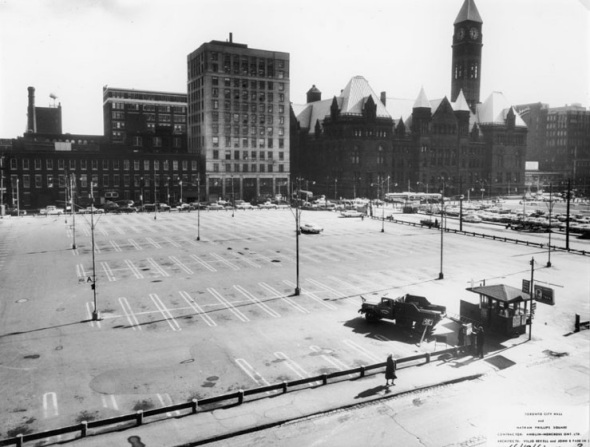 The creation of a new City Hall nearly lead to the destruction of the old one. There were plans to tear down the old building when construction started on the Eaton Centre. Plans caused for the structure to be torn down and replaced by skyscrapers and the mall itself. Public outcry saved the building.