On This Spot: BMO Field

This weekend at the Grand Prix of Toronto, I had my first chance to see BMO Field up close. Leaving the race I saw hundreds of soccer fans on their way into the stadium to watch Chile and Austria do battle at the FIFA Under-20 World Cup. I was impressed with the structure, but I couldn't help but think "Didn't we have a stadium here already?" Yes. Yes we did.

Exhibition Stadium was torn down in 1999. There had been stadiums and grandstands occupying the site since the late 1800s. The most recent (and final) incarnation of the stadium was opened to the public in 1959. About 25,000 people could sit inside the stadium. It was an addition to the CNE Grandstand - a structure that had existed in some manifestation or another since 1879. This was the fourth Exhibition Stadium. The third version of the building was destroyed by fire. The Toronto Blue Jays began their MLB existence at the stadium. The first ever Blue Jay game, played on a snow covered field, was instantly an iconic Toronto image. 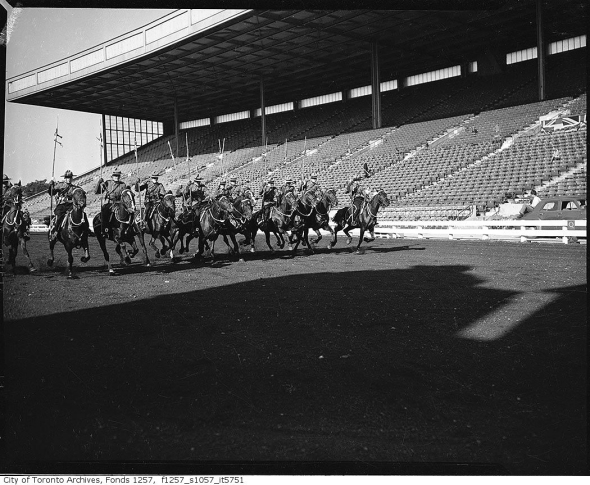 , the Beach Boys, U2, Metallica, Michael Jackson, Frank Sinatra, Bob Hope, Pink Floyd, the Rolling Stones, and many others performed there. In 1947 the building won the Massey Metal for Design in architecture.
Photo: Toronto Archives

But the same things that made Exhibition Stadium unique lead to its demise. It was coined the "Mistake by the Lake" due to the high winds, bad sightlines, and the large population of seagulls flying in from Lake Ontario. The Blue Jays and the Argos, who were the primary tenants of the stadium, quickly decided to move to a new domed stadium, as soon as they could build one. As they headed for the SkyDome in 1989, Exhibition Stadium was doomed.

There wasn't a great deal of opposition to the stadium's demolition. There were however many great memories of the grandstand engrained into the minds of Torontonians. The site is now a parking lot. In 2005 the city had a grand idea: Let's build a smaller stadium at Exhibition Place. The SkyDome/Rogers Centre is too large and besides, people want to sit outdoors by the lake. Let's make it hold around 20,000 and let's build it where the old Hockey Hall of Fame used to be, next to that huge parking lot down there, ... what used to be there anyway? 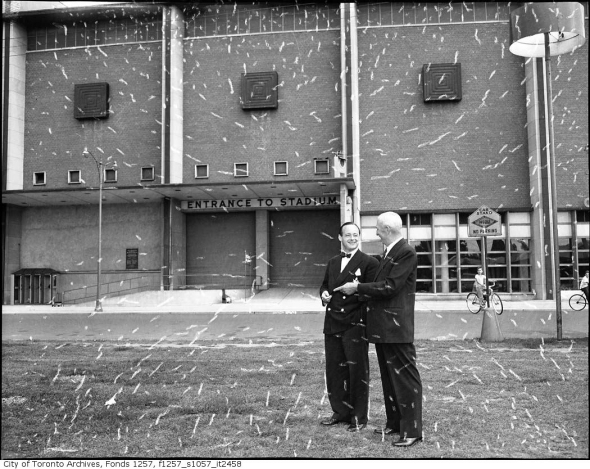