Fix Me, Can You Read the Signs?

You saved the Sam's sign and you're working on saving the CityPulse truck, but have you saved the TTC signs? As you may know the TTC plans on renovating, cleaning up, and upgrading numerous subway stations in the near future. During the renovations the TTC will remove a great deal of existing signage and replace it with new, updated signage similar to that now hanging along the Sheppard subway line.

While it's tough to argue that the subway renovations are unnecessary, some people take issue to the fact that the existing signage is going to be removed and destroyed. Joe Clark is one of those people. His hopes are twofold: Clark feels that the signage theme along the Sheppard line is inadequate for the rest of the system, and he feels that the original signs are too important to the city's history to be destroyed.

In the early 90s graphic designer Paul Arthur designed a new signage system for the TTC. His system included usage of individual icons for each subway station, more signage redundancy (using colours and images along with words), and pylon-style signage poles outside stations. Only part of St. George station was ever renovated to include these new signs. The city was not able to commit to the $8 million dollars needed to complete the project across the entire system. Many of the signs at St. George remain, including the pylon sign. 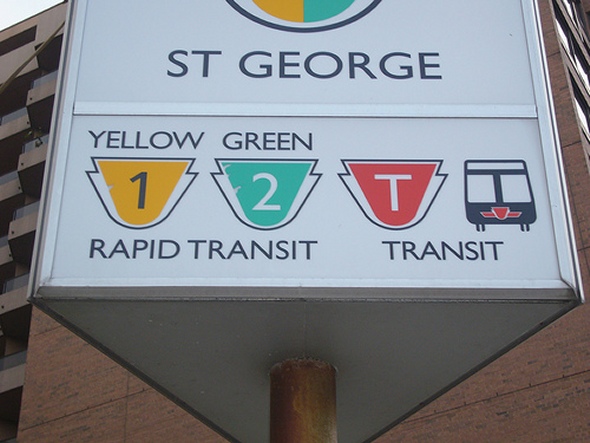 This summer the TTC plans to remove the Paul Arthur signs during the renovation of St. George station. They also plan to move some of the walls at Eglinton station to make more room. Some of the tiles at Eglinton station are the original tiles from when the station was first built. No other station on the Yonge line contains a sizable number of these tiles. Clark believes these signs and tiles, along with many other signs along the line, are an important part of TTC history and they should not be destroyed. Clark does not feel that the stations should not be renovated but he believes that the TTC artifacts should be preserved in some way, perhaps in a museum.

He also believes that the current signage system is inadequate and if it is going to be replaced serious thought should be put into the new signs. Clark states that the style of signage that lines the Sheppard subway is not adequate and it should not be duplicated along the entire line. He has recently taken his ideas to a Facebook group in hopes that this will spread his message and encourage debate on the quality of TTC signs.

The TTC's signage is not only inadequate, but it is also inconsistent and poorly developed. Not only is the TTC missing the point by planning to duplicate the Sheppard line signage (which Clark feels is a bad attempt at duplicating the subways in New York City) but it is also managing to destroy a little bit more of Toronto's history along the way.