Fish in Lake Scugog are all of a sudden going belly-up en masse, resulting in a stinky mess of dead fish and a lot of questions as to why this is happening. I wouldn't swim until the investigation provides results.

Cycling activists in Toronto have continued their efforts to make it clear that we need bike lanes downtown - now. A few weeks ago we saw the citizen-drawn lanes appear in the Annex, and now they're appearing in other areas of the city and in the media. The pink paint they're using is hot.

As the ROM crystal opening hype begins to subside, we're reminded that the AGO is also soon to reveal a substantial but conservative makeover. Next year the gallery will have spiral staircases, glass roofing, and a tower overlooking Grange park. Think Gehry on sedatives.

The host of a late Saturday night party in the west end had an altercation with a driver on the street, and was killed after being run down by the car outside his home. The suspect faces second degree murder charges and the murder weapon has been impounded.

Cottage country has bad chocolate. Hershey's chocolate that was tainted with Salmonella was recalled and pulled from shelves last fall, but someone stole it from the depot it was being stored in and must have resold it to stores. Beware of the 2 for $1 bins in small-town Ontario (i.e. check the lot numbers). 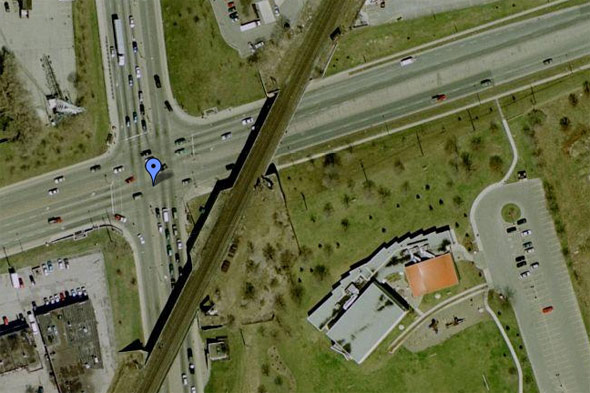 We've got higher-res images to play with now! Recognize this part of the city? Post your answer in the comments, and check for the answer in tomorrow's blogTO Morning Brew.