"Plane spotting" is an odd hobby, and most certainly isn't for everyone. But those that do it are really into it and seem to enjoy themselves immensely. I learned this first hand the other day when on a whim I decided to take a curiosity-induced drive around the perimeter of Toronto's Pearson International Airport and see what I could learn about the phenomenon that is plane spotting.

After making my way around more than half of the airport, I pulled up to the Wendy's at Airport Rd. & Orlando Dr. because I noticed a queue of twinkling lights in the distance - an indication that the nearby runway was being used for landings (it wasn't until later that I learned that this particular runway is Pearson's longest at 3.3km). I snagged my camera bag, and took a walk around. It didn't take long to have my first encounter with a plane-spotter... 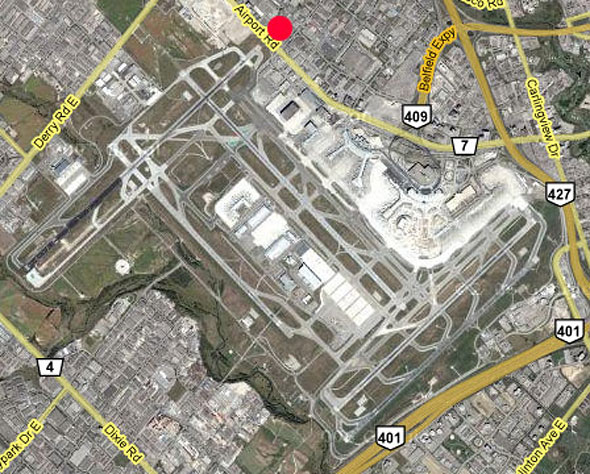 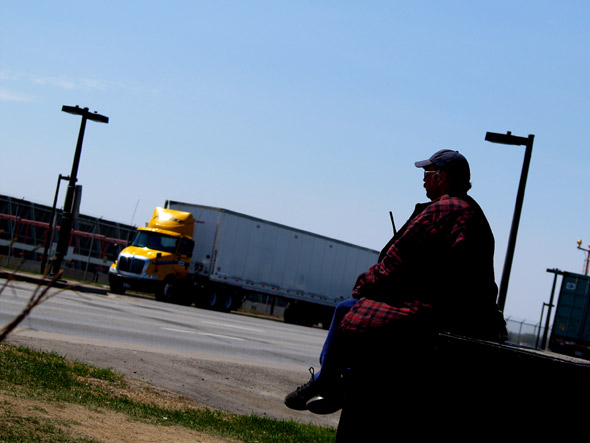 The first fellow I met was wearing a jacket with the words "Airport Watch" written boldly across the back. "Are you watching the planes?" I asked. "Yup," he responded courtly, as he tuned his walkie-talkie-like device and looked up into the sky before turning to walk away. Clearly he wasn't in the mood to talk to me, a newcomer to the scene. I made my way directly under the landing path, and snapped a few photos. 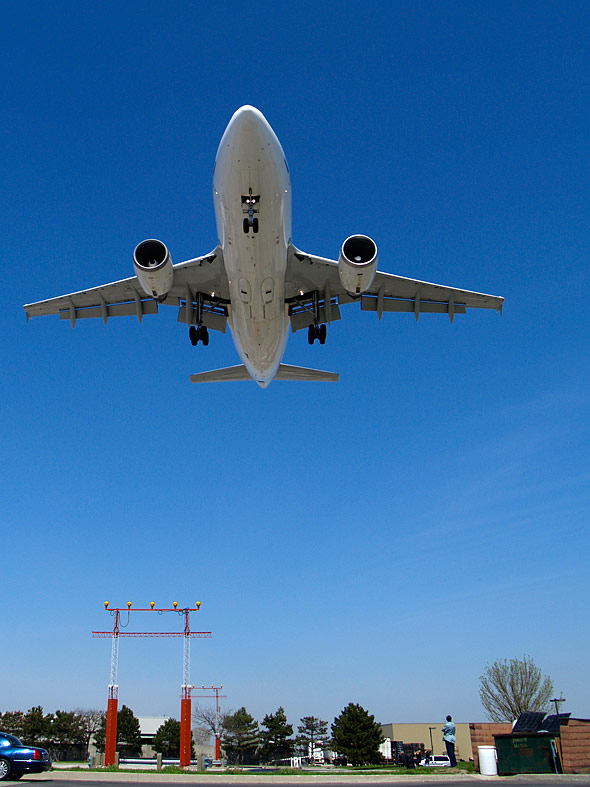 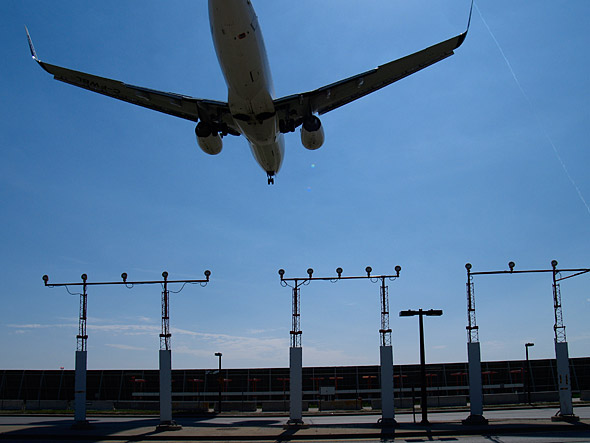 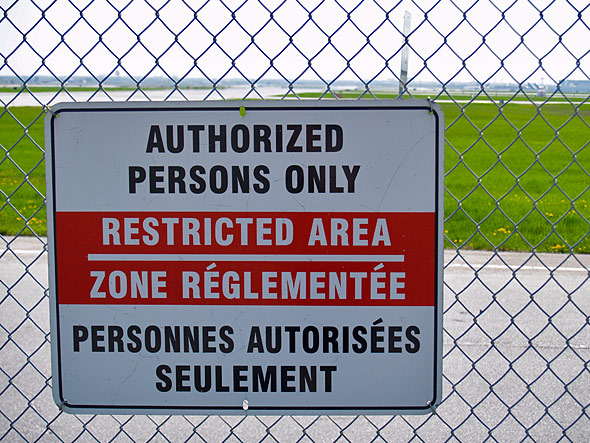 Across the street, on the chain link fence that separated public from private property, a sign reminded me to stay on my side of the fence. It made me think about security, and for a moment I considered packing up and going home rather than facing the potential consequences of meeting airport security staff who might think I'm a terrorist plotting some sort of evil scheme. That's when I met Stephan, a younger guy from Nova Scotia who (unlike the first plane-spotter I spotted) was smiling and approachable. 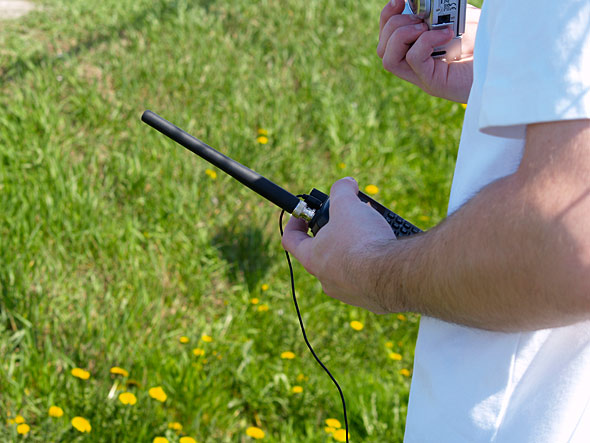 From his ears, he pulled out his headphone buds. At first I thought he was listening to music, but from his pocket, he pulled out his radio. "What are you listening to?" I asked. "The air traffic control tower, and the planes on approach, which are on different frequencies," he explained. "This is a cheaper one. You can pick one up at Radio Shack." 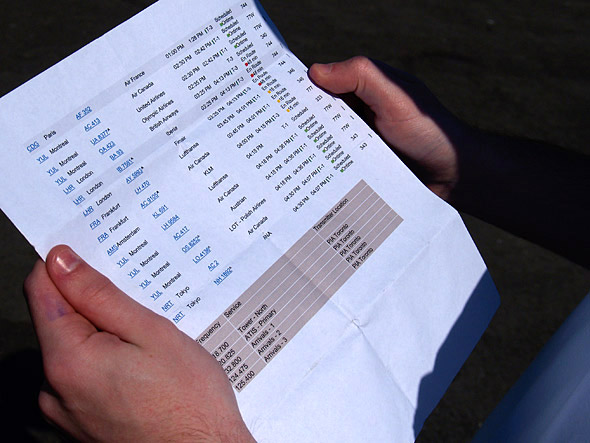 From his other pocket he then pulled out a piece of paper. As he unfolded it, he watched the horizon ahead of us. "A few big ones are coming soon. If you stick around between 3pm and 4pm you'll likely to see this British Airways 747." His info was from the internet, and detailed. The airlines, the type of planes, and their projected arrival times were all listed, along with a list of radio frequencies he could tap into to listen to the communications between the pilots and controllers. 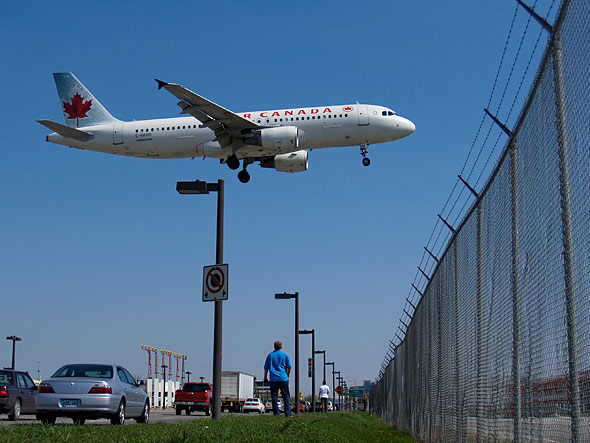 A few mid-sized Airbuses came in. It's rather amazing how low the planes are at this point.

Stephan was pretty sure that gigantic 747 would be arriving soon, and advised that I join him in moving off to the side to get a better view. "It's too big for the camera to stay here," he suggested.

He also told me a little about plane-spotter photography, and pointed me to a super cool web site for submitting and viewing the best of the best. "You've got zoom," he said, nodding to my camera. "Try to capture the exact moment the tires hit the ground and the smoke shoots out." 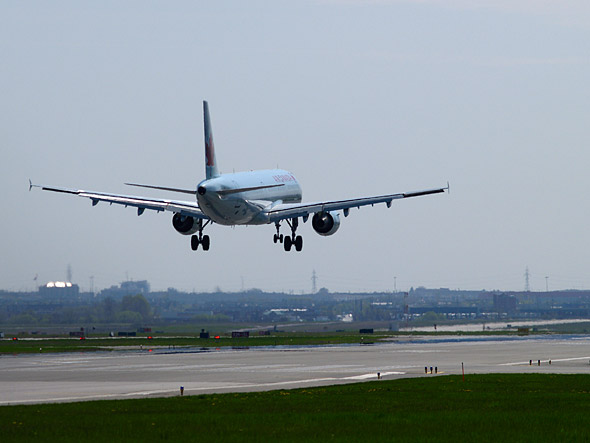 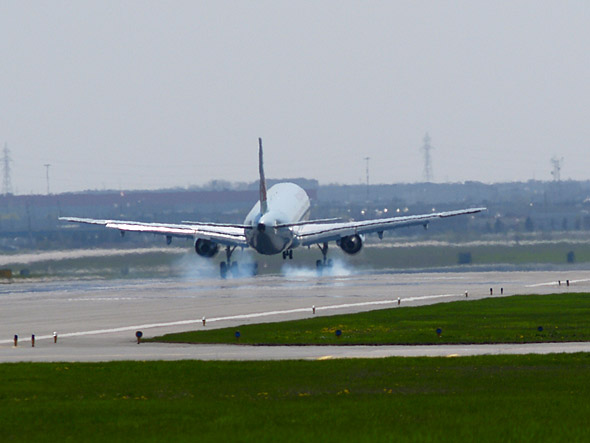 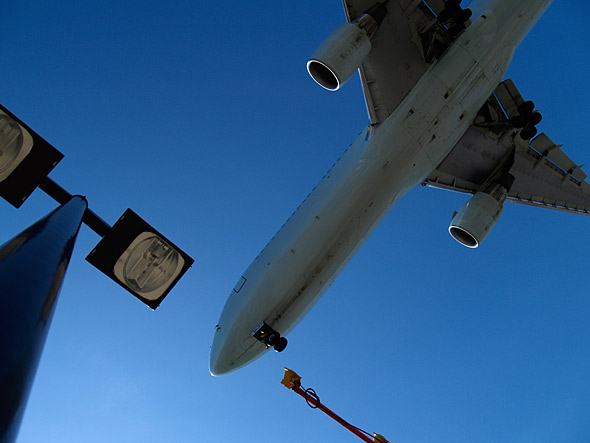 Then came the moment we'd been waiting for - the arrival of the massive British Airways 747. As it approached I marvelled at just how HUGE it was. I backed up a little further. I wanted to include my new friend Stephan (who'd come all the way from the downtown core by public transit to see this and taken me under his wing for the experience) in the frame.

Here's the moment in all its glory: 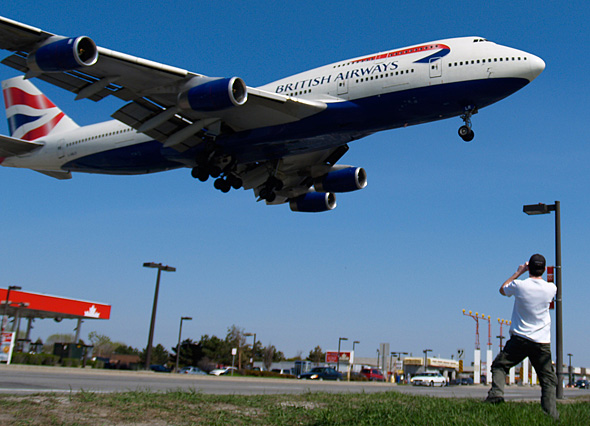 Despite shooting in rapid succession at a wide angle, I couldn't even fit the plane in the frame!

So there you have it... plane spotting at Pearson 101. It's not likely that I'll take up this rather geeky, somewhat strange hobby. But admittedly, it was a lot of fun. Had I been alone, and not had the pleasure of meeting my teacher Stephan, I don't think I'd have enjoyed myself nearly as much. Oh, and to see another (much larger format) view of a massive plane we managed to catch please check out this snap. Crazy eh?