The Undertow: The Statue of Peter Pan

Those who criticize Toronto as a city that exists in no one's imagination probably don't spend much time walking around its streets. Whether it's barely noticed sculptures, traces of buried rivers, or ants crawling up the sides of buildings, there are more than enough different parts of the cityscape to keep the imagination active and running.

In some parts of the city, though, the imagination is engaged not by an esoteric piece of public art, but rather by something so simple it could capture the mind of a child. Take the corner of St. Clair and Avenue Road, where for almost 80 years a 14-foot statue has stood, boasting a figure that is as representative of imagination as any symbol in Western society.

The statue of Peter Pan was fashioned by Sir George Frampton, and is an exact duplicate of a statue that has resided in London's Kensington Gardens since 1912. The location in London is extremely symbolic: it was in those same gardens that author James Barrie met the children who were the inspiration for the characters and the tale that is so well-known and loved. 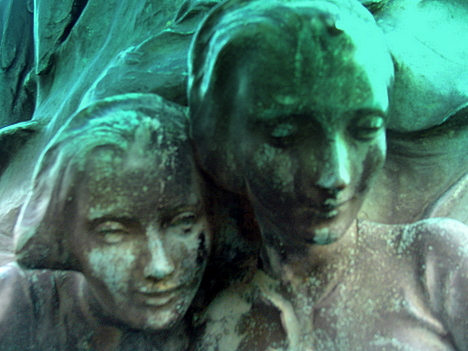 The statue came to Toronto when the city acquired the small square at the north-west corner of Avenue Road and St. Clair, which is now home to Glenn Gould Park. The College Heights Association asked that the park become a children's garden, offering to raise the money to purchase a duplicate of the Peter Pan statue that was so popular with children in London. In fact, Toronto is not alone in boasting a duplicate of the statue; there are at least five others around the world, not including the original. It was installed in Glenn Gould park in 1929.

If you head to the park now you'll see the statue still standing there, with Peter Pan surrounded by animals and other figures from the story. It really is an impressive sculpture: the animals and characters melt in and out of the base like the wisps of a dream, and Peter Pan stands above them all, looking off into the distance.

Look even closer and you'll see the signature of James Barrie himself, near the back, on the bottom of the base. It's a nice thought to think that this children's garden bears the writing of a man from whose mind such a popular tale sprang, as if his imagination could spring right out of the statue and spill on to the streets below.

The Undertow is a weekly column that asks the question, "How'd That Get There?" It explores the landmarks in Toronto's public spaces that act as metaphors in the city's story, and run like a current beneath the urban landscape.