Local public space magicians Newmindspace held their third annual Easter egg hunt this past Sunday on Bloor Street from Bathurst to Yonge. A team of bunnies assembled at Bloor and Spadina around 4 am, myself included, where organizers Kevin Bracken and Lori Kufner distributed around 2000 - 3000 plastic eggs containing handwritten messages and divided up the territory amongst the groups.

Due to a mix-up with the company from whom they'd originally ordered their 5000 eggs, who unhelpfully decided to not bother notifying them that none were being sent, the pair had to scramble (groan-worthy pun not intended) to get as many together as they possibly could. Volunteers met up last week to write out messages for inclusion in the eggs, and several people who showed up Sunday brought their own eggs containing various types of small prizes.

Given instructions to try to stick closely to Bloor and to avoid placing any eggs within reach of street-sweepers' vacuums, we split up and made our way along the street, planting eggs in bushes, on window sills, inside newspaper boxes and anywhere else that seemed viable and clever. It didn't take too long for everyone to empty their bags, and our group reached the end up of our turf with only three or four left to hide.

We all headed home, equal parts cold and elated, and hoped that the morning would bring joy to whichever lucky kids or adults found themselves down in the area come daytime. Personally, that was most definitely not going to be me and my teammates, as we were headed North in need of our beds.

On the way to catch our bus uptown, we had to stop and grab a copy of NOW Magazine to take a look at the article that had caused such chatter amongst the group earlier that morning and in the days leading up to the event. 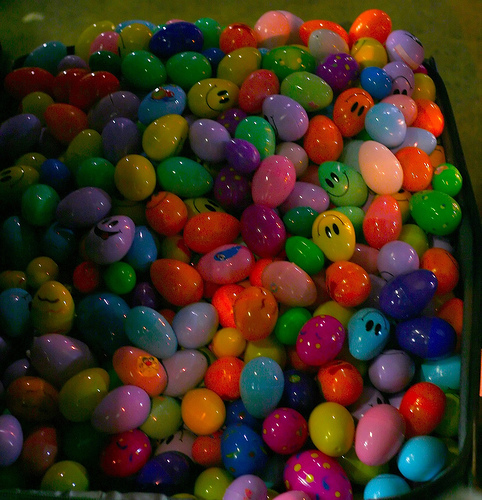 Apparently, NOW writer Ashley Walters had taken issue with Newmindspace's use of plastic eggs for the event. She deemed it environmentally-unfriendly, landfill-cluttering behaviour and had suggested in an e-mail to Newmindspace that they consider using real eggs instead.

The idea that someone was seriously telling them to buy and boil 5000 eggs (without any suggestion as to what was supposed to happen to the eggs - presumably they were to be individually handpainted and left all over the city?) was simply laughable to them, and Bracken's response to Walters poked fun at the notion while questioning whether she had any comprehension of where all those eggs came from or how unrealistic and wasteful the idea was.

The thing is, totally unbeknownst to Newmindspace, Ashley Walters was a writer for NOW and decided to expand their private e-mail exchange into a NOW Magazine article on the environmental ethics of Newmindspace's Easter event. The pair discovered this when they read it themselves, and Newmindspace's response to NOW can be read both on the Newmindspace Lens blog and hopefully in the Letters section of the upcoming NOW issue.

I could offer my take on Ashley's opinion, but I think Kevin does a fine job of covering most of the bases in his letter, plus I think the NOW article itself leans in the direction of talking readers out of its thesis. However, I might add a few things.

First of all, what exactly are people supposed to do once they're unlucky enough to find a hard boiled egg sitting on a ledge downtown? Personally, I wouldn't go near the thing, and any left undiscovered would stink up the surrounding area like Spadina during that trash-collection strike.

Second, plastic easter eggs are perpetually useful until someone accidentally or maliciously damages them. Ashley's article implies that everyone who finds these eggs will decide they're finished with them, turn around and plunk them into a trash can. Even beyond that, her carefully-chosen wording deems the eggs to be "litter" from the moment they're hidden.

Third, Ashley's claim that messages like 'Allow your individuality to shine through' represent "mindless consumption ... of 'hip' culture" makes no sense and just makes her seem confused about exactly which definition of consumption she's concerned about here.

Fourth, and lastly, if we're to be so concerned about the resources being so callously and pointlessly squandered by the heartless eco-terrorists pictured below, shouldn't we perhaps take a look at how many resources were invested in producing the 1/4 page NOW printed 250,000 times in order to convey Ashley's drivel to the world? 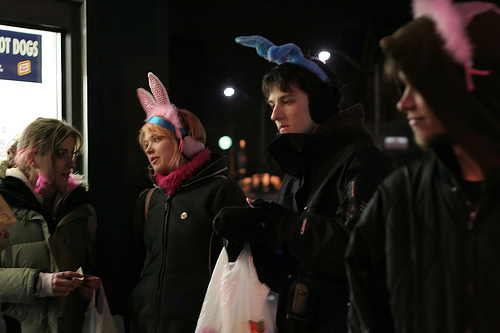 Of course, maybe that sort of nitpicking is - like Newmindspace says in their response - completely missing the point. Again, I'd have to agree.

Obviously, it's vital for us to be ever-vigilant about the impact of our behaviour and consumption on the world, especially today. But at the same time, without people and groups like Newmindspace pouring their energy into spreading joy and beauty into people's hearts, minds and lives, this culture is never going to turn around from the darkness and apathy that it seemed hopelessly consumed with not too long ago... and without the development of such a cultural movement towards healthy, positive living in general, individual efforts towards sustainability won't ultimately count for much of anything.

I'm curious - Ashley Walters, though I'm sure you must recycle, what exactly have you done to make the world a more wonderful place lately? So far, you just look like a sourpuss...

I'm also curious as to what everyone else thinks about the event and surrounding debate. Did any readers get to take part in the hunt themselves, or simply happen upon an egg while on their way to grab a falafel? What message did you get?