Photo: "Work on the addition to the Royal Ontario Museum" by blogTO Flickr pooler jsaneb)

Toronto sports fans had a wild weekend that saw the Toronto FC lose its MLS debut, the Leafs miss the playoffs in rollercoaster style, the Raptors paste the Bulls, and the Jays win their series in Tampa Bay. I'm hopping on the Raptors wagon.

Rogers is pinning the blame on a 3rd party company for improper disposal of customer data. Forms, including sensitive data such as SIN numbers, were found scattered in an alley in the city. It's an identity theft goldmine, and left's just hope no one got to the pile before it got cleaned up.

An arrest was made in the Etobicoke drive-by shooting that saw the tragic end of an 18-year old's life last week.

The public learn more about the Hell's Angels bust as the fallout continues. Apparently there was an inside "rat", who just weeks before the bust made an impassioned plea for the gang to not follow through on a plan to invite the media into the clubhouse for a tour. Other tipoffs appeared on the Angels' site sugest that a judge's court order to raid the clubhouse was leaked 11 days before the bust.

HIV in Toronto is on the decline, but young people (in the 20-24 age backet) are seeing increases of occurence of the deadly disease.

Six Canadian soldiers were killed in Afghanistan by a road-side bomb, on the same day Canadian WWI sacrifices were being honoured at Vimy in France.

Crossroad Puzzle after the jump... 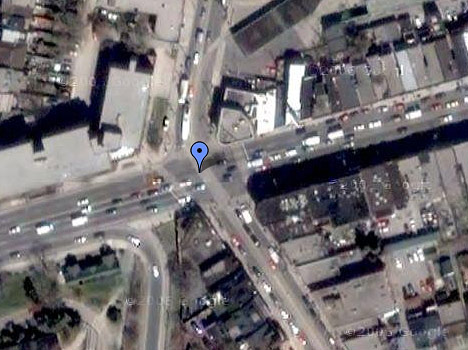