Are We Losing the Fight for a Bikable City?

Last night, at NOW Lounge's first in a series of "Town Hall" meetings to discuss current issues affecting Torontonians, a panel of six tried to answer the title question with the most optimism possible. With the recent demise of Toronto's BikeShare program, and the inability of the city council to remain on track with their Bike Plan, the question seems almost rhetorical. I think Wayne Scott of the Hoof and Cycle Courier Coalition said it best. He says it may seem like we're losing the fight right now, but ultimately, and inevitably, we will win this war.

The panel consisted of six cycling elitists/advocates, including Adam Giambrone, Tanya Quinn of crazybikerchick.com, Dan Egan (manager, pedestrian and cycling infrastructure), Wayne Scott (representative for Toronto's bicycle couriers), Darren Stehr of the ARC and Hamish Wilson, who is a member of the Toronto Cycling Committee and the Take The Tooker team.

Giambrone defended the council without favouring them, blaming the council's bike plan shortcomings on "political malaise". 484km of bike lanes have been planned for the city and only 69km have been finished; Giambrone chalks it up to manpower. The funding is there, he says, but without the bodies to back the plan, things fall through the cracks. Fortunately, four new members have been added to the Bike Plan team. We should see an increase in the amount of bike lane laid in the near future. Plus, he added, every single bus in the new fleet (which we'll see in 2010) will have bike racks on the front, making the network of bikability in the city more complete.

Dan Egan reiterated the fact that politics are the problem in getting the Bike Plan fully instituted. He said as soon as council hears even mild opposition to a bike lane, the council gets cold feet. His solution? Cyclists need to be more vocal.

Wayne Scott believes that city council, and most non-cyclists, don't see biking as valid form of transportation. "There needs to be a major shift in society," he says. Active transportation needs to be taken as seriously as motor vehicles. And we need to understand that driving a car is a privilege, and not a right.

Tanya Quinn made a very valid point (among many), "We need to lose our reluctance to restrict cars," she said. "It doesn't make sense that a streetcar with 70 passengers will get held up by a single occupancy vehicle waiting to turn left on a busy street." She also suggested signs on narrow streets, stating cyclists are entitled to a full lane of traffic. This comment was followed by boisterous applause from the audience. Solutions don't need to cost thousands of dollars in order to be effective.

Hammish Wilson didn't want to sound like a "carmudgeon" (he was full of witty puns last night), but he sees the council's Bike Plan as flawed and timid. Solid leadership is needed. Personally, I think it's going to take the support of a celebrity in order to increase awareness. After all, global warming remained on the back burner until Al Gore started touring with his inconvenient slide show.

To wrap up the evening, host Mike Smith asked each of the panelists what the ideal future of a bikable city looks like. Suggestions ranged from a car-free downtown core to having commercial deliveries made at night to lessen traffic during the day. Slowing car traffic to speeds more compatible with cyclists may help, and having two-lane streets (with dedicated streetcar lanes) will lighten traffic even more.

To Darren Stehr, the future of cycling in the city will mean inspiring more people to ride, rather than having people feel forced (because of rising gas prices). The benefits of cycling need to be more widely known- save money, save the environment and improve your health. It's a win-win-win situation. Except of course, when you win one of the dreaded door prizes motorists dole out daily (a suggestion was made to fine these particular drivers, which was met with more applause).

Discussion on the bikability of Toronto continues tonight at Metro Hall, Room #309, with the Toronto Public Spacing Committee. This week's NOW Magazine is full of biking resources, and organizations like the ARC and Critical Mass can show you other ways to promote a bikable Toronto. 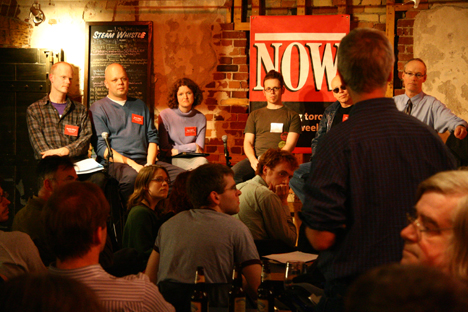