Following up on a post I wrote last week, I made the short streetcar trip last night down to the Toronto Free Gallery for 1 Plus 1 Equals 3's opening reception of their ongoing exhibition entitled Urban Design or Civic Design? It was actually a great turn out (far more people than they originally expected) and everyone seemed to be really into the show. Headed up by former architecture student Andrew Chiu, 1 Plus 1 Equals 3 hopes to bring together passionate people from a broad range of disciplines in a series of forums, discussions and events addressing a number of urban issues concerning Toronto.

As part of the opening reception there were screenings of three intriguing Canadian short films. The first was Ryan Larkin's infamous animated piece Walking, followed by George Geertsen's The Men in the Park, and then finally the NFB classic City Limits featuring Jane Jacobs and directed by Laurence Hyde. 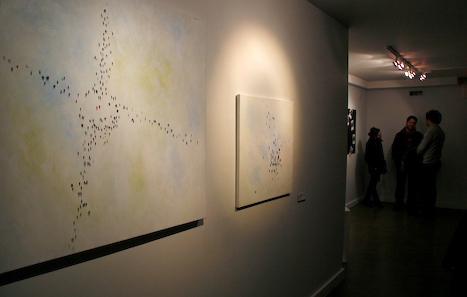 The show also featured a number of interesting and beautiful works by local artists and designers. Among them was Andrew Chiu's piece (shown above) inspired by the socially collective aspects of the show as a whole. Another gorgeous piece (and my personal favorite) was Upbag Collective's felt city installation (shown below). I could barely resist giving the whole city of Toronto a gigantic hug (don't act like you don't want to). 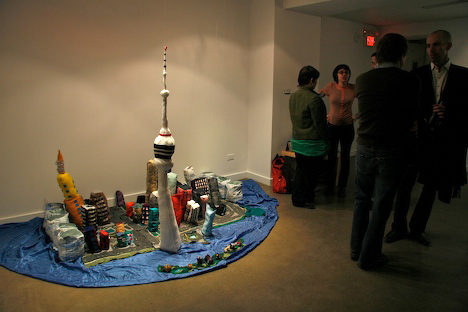 Overall, the event was a great introduction to the exhibition. If you missed last night's festivities, the "main event" so to speak happens next Saturday, March 24th in the form of a panel discussion at 1pm, followed by a public forum at 3pm. There are some interesting people scheduled to participate, so it should prove to be an interesting (and hopefully productive) afternoon.