The Undertow: The Yorkville Coat of Arms

Welcome to the inaugural Undertow post! Have you ever walked around Toronto and asked yourself, "How'd that get there?" The undertow is a new blogTO column dedicated to exploring the hidden and un(der)explained parts of Toronto's landscape. Composed of two parts psychogeography, two parts research, and one part pseudo-artistic photography, the Undertow will connect Toronto's piecemeal plaques, pieces of public art, unique buildings, and heritage areas with the stories that make it the special place it is. Since Toronto is often described as a city without character or history, this column hopes to prove the opposite, that there is a current (an undertow, if you will!) that runs beneath the surface of the city and shapes the way we see it today.

The Wednesdaily column begins today with the Yorkville Coat of Arms!

Tucked away behind a tower of glass on Yorkville Avenue, just west of Yonge Street, lie two of the Village of Yorkville's oldest buildings: the 1907 Yorkville Branch of the Toronto Public Library and the 1876 Yorkville Fire Hall. Both stand in a part of the neighbourhood that many likely consider beyond Yorkville's current boundaries, but a quick glance through history books and even the BIA's map shows the old landmarks are still very much a part of the neighbourhood. 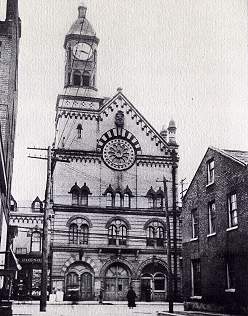 With skyscrapers now dominating the area, though, it's easy to wander right past these buildings without taking much notice, and it's even easier to miss the coat of arms hanging over the western entrance to the Fire Hall. This coat of arms, which originally stood on Yorkville's Town Hall on the corner of Yonge and Yorkville Avenue, tells a great deal about the history of the area without the aid of a single printed word (although for those who don't have time to go to a library there's a summary on a plaque). Unfortunately for Yorkville Town Hall, its proximity to a Fire Hall did little to protect it when it burned to the ground in 1941. The Fire Hall did the next best thing, though, and adopted the salvaged coat of arms for display above its doors.

Long before hippies were filling Yorkville's coffee shops in the sixties, the village had a reputation as a town "built on bricks and beer" because of the jobs and money generated by local breweries and brickworks. It shouldn't surprise, then, that the top two symbols on the coat of arms are a beer barrel and a brick mould. Each of the five symbols corresponds to the professions of the village's first councillors, and the accompanying letter stands for that councillor's last name. So the first two symbols belong to John Severn, brewer, and Thomas Atkinson, brick-maker, while the rest are rounded out by a jack plane for James Dobson (carpenter), an anvil for James Wallis (blacksmith), and a sheep's head for James Hutty (butcher).

While the rest of the block shows little trace of the history that built the area, this small nod to a different time shows why the neighbourhood still has important place in many a Torontonian's heart. I wonder if they'd make as much of an effort to preserve part of Sassafraz if things had gone much worse...

Images from me and History of Toronto.