The Undertow: The Queen's Park Cannons

I've only been inside Queen's Park once, during one of those grade school trips they take you on to observe the parliamentary "process." I remember sitting at the top of the gallery under the watchful eye of teachers while the politicians below interrupted each other at will. While I wasn't overly impressed with politics in action, I was impressed with the building and park. It turns out that some of the monuments around the park are older than the building itself, and were created with a considerably more malicious intent than decoration.

While I haven't been back inside since that grade school trip, I've walked by the provincial parliament hundreds of times. The building has a classic majesty that's rare in Toronto, which is probably why it rivals the ROM and University College as the site of the most ghost stories. The surrounding park is filled with a growing museum of monuments, statues, and plaques - a kind of sculpture garden of our civic and provincial history. Among the works sprinkled around Queen's Park are a pair of bronze cannons on either side of the main entrance to the building. These cannons have traveled a long way, and have become infused a symbolism that connects Toronto to its military history. They now sit in front of the parliament building, but were originally paraded through the city and delivered to Queen's Park in 1859, thirty years before the building was even built. When the building was finished in 1892 the cannons were moved to the main entrance, where they still sit today. 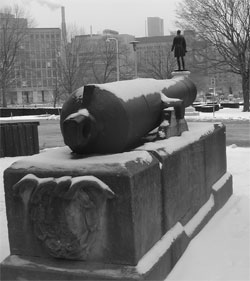 The cannons were initially used by the Russians against the British in the Battle of Sevastopol in the Crimean War of 1853 - 1856. When the British won the battle they took the liberty of relieving the Russians of their cannons, which were then sent in pairs to key cities within the British empire, including Toronto. During the war Queen Victoria used to visit her injured soldiers in hospitals. She was so moved by their bravery that she created a medal that was awarded to soldiers "For Valour:" the Victoria Cross. All Victoria Cross medals were supposedly fashioned from two bronze cannons captured at Sevastopol, although this claim was recently disputed.

The first Canadian to receive the Victoria Cross was Lieutenant Alexander Dunn, from Toronto (then called the City of York), for a heroic feat of bravery. Here's an excerpt from his Victoria Cross Citation:

"Having emptied his revolver at the Russians he flung it at them and resorted to his sabre, which he used to good effect. Dunn stood 6-foot-3 and used a sword much longer than the regulations permitted."

I love the delicacy of the English language in its earlier incarnations.

The inscriptions on both the cannons and the pedestals they stand on are fading, but they still tie the city to its earlier days as a proud British colony, with celebrated war heroes and stories.

Images taken by my frozen self