Watching good old Breakfast Television this morning (Hi Dina!), I was alerted to the big street closure in the financial district. Turns out police were involved in the shooting of two people at King and Bay. One person was shot in the head and the other in the abdomen.

Until noon (and possibly later), access to the area between Adelaide and Wellington along Bay, and Yonge and York along King will be closed while 5 officers from the Special Investigations Unit (SIU) and 4 more rom the Forensics Unit to do their thing.

Now, not much really happens out where I live in the Beach(es), but all of this media coverage, as well as walking to work surrounded by police tape, has got me thinking about a few things...

First things first: there's pretty much no news regarding the events that transpired early this morning, aside from the fact that two people were shot by police.

As a rule, cases involving the SIU force police to not make any statements to the media. Because the details are sketchy, most news sources are reporting the exact same thing, while some have funky reports coming in:

Citynews is reporting the police shot out the rear window of a Dodge Neon as it was heading towards an unmarked police car. You don't need to watch CSI to understand why that statement sounds a little backwards, so to speak.

I'd think the police would have to move around a bit to only shoot out the back window of a car that ended up smashing into the pole of a street lamp. Either that or some weird dimensional portals opened up, swallowing the bullets and spitting them out from the other side of the car. 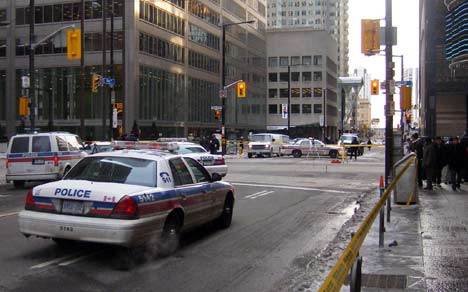 Breakfast Television had live reports coming in about people being upset about having the street closed -- because they couldn't move their cars.

Part of me sympathized; it would really suck to get back to your parking spot later in the day only to discover your car's been towed because you couldn't move it because of the police tape.

Another part of me finds it kinda horrible that with two people having been shot and the SIU getting involved, that people would even care so much about moving their cars in the morning. Bullets entered people's bodies, and before we hear any more information regarding what happened, it's hard for me to wish gunfire on anyone.

A third part of me wonders why this was even mentioned on the news. Is it even news when people can't move their cars during a police investigation into a downtown shoot out? All this while a fourth part of me says, "Of course it's news!"

I can feel very conflicted sometimes.

In the end, I'm just thankful that any inconveniences I suffered as a result of the events were pretty insignificant compared to what others have faced before. I even got to walk through the middle of the street without fear for a few blocks on the way to work this morning.