glowTO: Across the Border and Over the Top

For the ultimate glowTO home, I crossed just over the Toronto border (literally) at Steeles Ave to visit 4 Rosea Court (Bayview & Steeles), home of the Lindsay Lights.

Created by wizards Martin & Andrew Lindsay, this display -- or show, I should say -- is synchronized to music and contains over 70,000 hand-strung lights (60,000 of which are now more energy-efficient LEDs). The show has a couple different sequences, broadcast locally over 104.9 FM and runs just under 4 mins. Check out the video above (we shot it over the weekend) for a lo-fi taste of the spectacle... 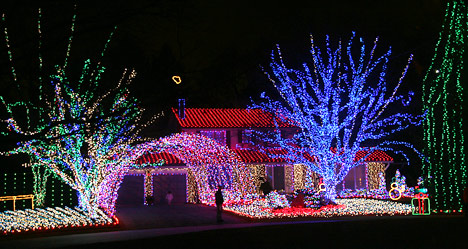 The Lindsay Lights have been around since 2002 and each year more and more visitors make the trip to see them. Just in 10 minutes we were there, countless cars, bicycles ('cause the weather is that good) and folks out for a walk came by for a look.

Thankfully, from what I can tell, the Lindsay's appear to have good-humoured neighbours.

This isn't just an act in over-the-top holiday spirit though. Since 2002, donations from visitors have amounted to over $23,000 (wow) - all of which is distributed to local charities.

And like any great thing, there are the inspired imitators.

Just today I was pretty surprised to see a featurette on the Toronto Star website on the Weiss Lights out in Newmarket. There, the owner has strung up 20,000 lights and when you watch the video... well, my goodness, that's the exact same track by the Trans-Siberian Orchestra and it all proceeds in just the same way.

He's doing it for a good 'cause, so I'm not about to knock his efforts... but perhaps a different track would at least give us something new to head to Newmarket to see (no pun intended...).

There is one thing the Weiss lights don't have... and that's adorable LED snowmen (my favourite part), created in 4 frames so that they appear to be having an animated snowball fight. SO cute. 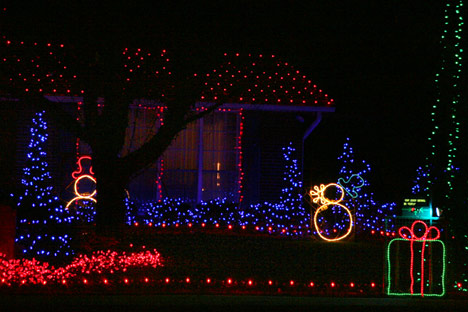